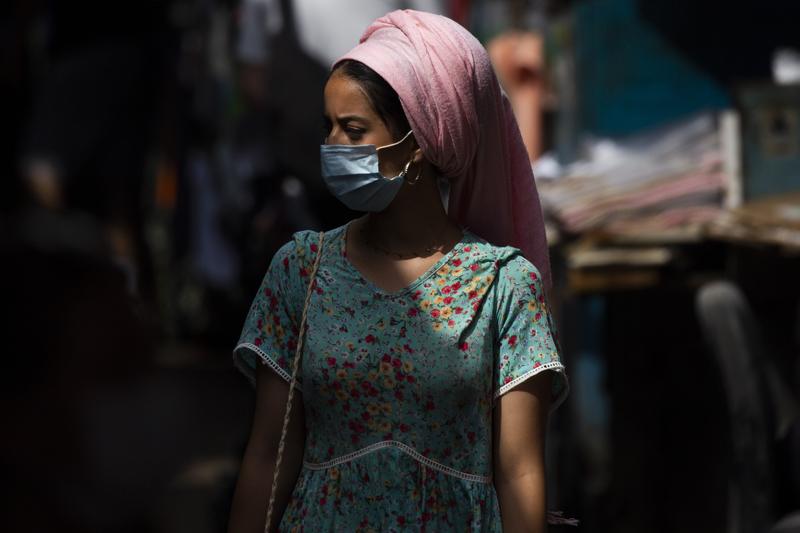 In public remarks at a special cabinet session on the health crisis, Prime Minister Benjamin Netanyahu said Israel had to reverse course to avoid a wider lockdown that could paralyse its economy, where unemployment is just above 20 percent.

A government announcement said that in addition to the immediate shuttering of bars, night clubs, gyms, event halls and cultural events, the number of diners in restaurants would be limited to 20 indoors and 30 outdoors.

Attendance at synagogues was also capped at 19 worshippers, and buses would be allowed to carry only up to 20 passengers, the statement said.

After largely containing the spread of the coronavirus in May and reopening schools, beaches and businesses, Israel has been hit by a sharp rise in infections in recent weeks.

Scenes of Israelis ignoring social distancing restrictions and orders to wear masks outside have been common.

In Israel, more than 30,000 people have tested positive for the novel coronavirus and 332 have died.

Palestinian officials in the occupied West Bank imposed a full lockdown on Friday as new cases there surged. In all, there have been nearly 4,300 cases reported in the West Bank, with 16 deaths, and 72 in Gaza, where one person died.

Waiters serve customers at the Indian Coffee House after the establishment reopened following the eased restrictions imposed by authorities as a preventive measure against the spread of the COVID-19 coronavirus in Kolkata on July 2, 2020. (DIBYANGSHU SARKAR / AFP)

India's federal health ministry Monday morning said 425 new deaths due to COVID-19, besides fresh 24,248 positive cases, were reported during the past 24 hours across the country, taking the number of deaths to 19,693 and total cases to 697,413.

The country has overtaken Russia to become the world's third-worst affected nation by the pandemic.

India has withdrawn a planned reopening of the Taj Mahal on Monday,  citing the risk of new coronavirus infections spreading in the northern city of Agra from visitors flocking to see the 17th century monument to love.

Local authorities issued a new advisory late on Sunday ordering an extension of lockdown curbs on monuments in and around Agra. The government order did not specify the duration of the lockdown for monuments that have been closed since March.

Afghanistan's Public Health Ministry has confirmed 239 new COVID-19 positive cases over the past 24 hours, bringing the total number of patients infected with the virus to 33,190 in the country, spokesman for the health ministry Akmal Samsoor said Monday.

According to the official, 34 patients have died over the past 24 hours, bringing the number of COVID-19 related deaths to 898 since the outbreak of the epidemic in February in Afghanistan.

Australia’s two most-populous states will close their shared border from Tuesday night as authorities battle to contain a spike in coronavirus cases that jeopardizes the nation’s economic recovery.

Throughout the pandemic, New South Wales and Victoria had resisted closing the border to avoid adding to economic disruption. But a resurgence of the virus, that has prompted a lockdown across 12 areas of the Victoria state capital, Melbourne, has forced a rethink.

“This is one of those precautionary measures, it is one of those things that I think will help us in broader terms contain the spread of the virus,” Victoria Premier Daniel Andrews told reporters on Monday. The state recorded another 127 cases of the virus overnight, and reported the death of a man aged in his 90s, taking the national toll to 105.

The decision marks the first time the border with neighbouring New South Wales has been shut in 100 years - officials last blocked movement between the two states in 1919 during the Spanish flu pandemic.

While Australia has been one of the standout performers globally in limiting the spread of the virus to less than 9,000 cases, Victoria’s flare-up -- mainly amid Melbourne’s poorer and more multicultural suburbs -- shows just how hard it will be to eradicate without a vaccine.

Fiji confirmed on Monday one new COVID-19 case, one month after the island nation declared it was free of the virus.

Fiji's Acting Permanent Secretary for the Health Ministry James Fong announced on Monday that a 66-year-old man who returned from India on Saturday tested positive on Sunday and he is now isolated in a hospital in Nadi, Fiji's third largest city.

Bali, Indonesia’s most-popular holiday destination, will welcome back visitors from the end of this month even after the resort island saw a more than four-fold increase in virus cases since the end of May as pressure mounts on authorities to rescue the battered tourism industry.

While local tourists can visit the beaches, temples and the popular surfing spots across the island from July 31, foreign visitors will be allowed from Sept. 11, the Bali government said in a statement. The reopening of the tourism industry is part of a plan to restart the economy in a phased manner, it said.

The plan was announced by Bali governor Wayan Koster after participating in a Balinese Hindu ceremony on Sunday.

The case total is currently 64,958 and number of fatalities 3,241, said Achmad Yurianto, a ministry official.

At her daily briefing, Sima Sadat Lari, the spokeswoman for Iran's Ministry of Health and Medical Education, said out of the new cases in the past 24 hours, 1,468 have been hospitalized. 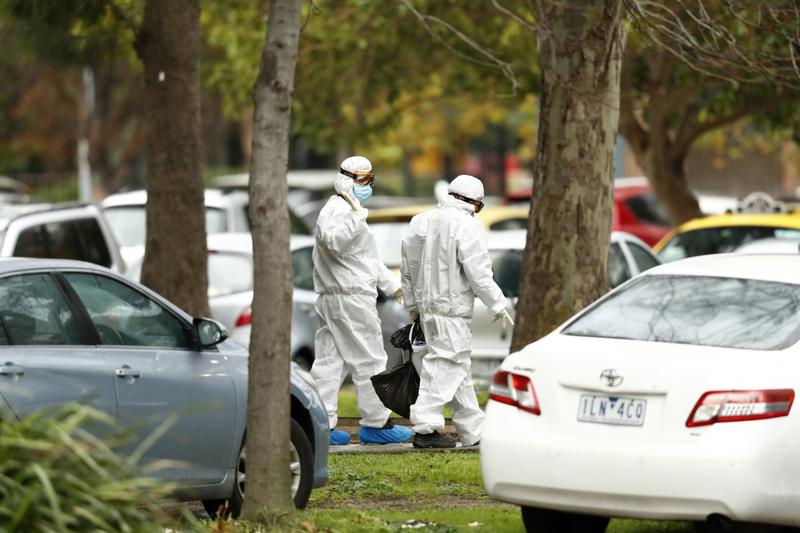 Iraqi Health Ministry said on Sunday that 2,125 new COVID-19 cases were reported, bringing the total infection cases in the country to 60,479.

The ministry also reported 105 more deaths, raising the death toll from the infectious virus to 2,473.

Japanese Economy Minister Yasutoshi Nishimura said on Monday the government had agreed with members of a new expert panel to ease restrictions on holding events from July 10.

“We agreed that the situation is different from April, when the government issued a state of emergency,” Nishimura said.

The relaxation comes despite Tokyo confirming 102 new coronavirus infections on Monday, according to public broadcaster NHK, the fifth straight day that the tally of fresh cases has exceeded 100.

Recorded cases in Tokyo have risen recently, driven by the spread of the virus in the capital’s night spots and increased testing among nightlife workers, said Tokyo Governor Yuriko Koike.

Kyrgyzstan confirmed on Monday 314 new COVID-19 cases, bringing the total confirmed cases in the country to 7,691.

The country's Deputy Health Minister Mademin Karataev said that all the new cases are contacts of confirmed patients, and there are no imported cases.

Among the newly infected, 50 are medical workers, bringing the total number of contracted medical workers to 1,147, including 503 recoveries, Karataev said.

Health Ministry Director-General Noor Hisham Abdullah said in a press briefing that of the new cases, three are imported and two more are local transmissions.

New Zealand reported one new case of COVID-19 on Monday, bringing the number of active cases of COVID-19 in the country to 22, all in managed isolation or quarantine facilities, according to the Ministry of Health.

There continue to be no cases of COVID-19 in the community. It has been 66 days since the last case of COVID-19 that was acquired locally from an unknown source, said a statement of the Ministry of Health.

Meanwhile, 10 new fatalities from the virus were reported, bringing the death toll to 213, while 949 more patients recovered, raising the total recovered cases to 27,917, the health ministry said in a statement.

In a separate statement on Sunday, the ministry announced that it was preparing for a survey of antibodies to help determine the extent of the COVID-19 infection across the country.

The number of confirmed coronavirus cases in Qatar exceeded 100,000 and Kuwait surpassed 50,000 on Monday, their health ministries said.

Only about 12 percent of Qatar’s population are Qatari nationals and, as in other Gulf states, Qatar saw COVID-19 spread among low-income migrant workers living in crowded quarters.

With a population of about 2.8 million people, the energy-rich Gulf state has one of the world’s highest per capita numbers of confirmed cases.

Qatar, which did not impose curfews, began a four-phase lifting of restrictions on June 15. The second phase began on July 1, allowing the limited reopening of restaurants, beaches and parks.

Qatar has the second highest number of cases after much larger Saudi Arabia in the six-nation Gulf Cooperation Counci, which together have recorded more than 489,000 cases and 3,000 deaths.

Kuwait initiated a five-phase plan at the start of June to gradually lift coronavirus restrictions, including partially restarting commercial flights from Aug. 1. A partial curfew remains in place.

Two of Pakistan’s top ministers have tested positive for the coronavirus, as the south Asian nation becomes a hot spot for the pandemic in South Asia.

Health minister Zafar Mirza said in a Twitter post Monday he has isolated himself at home with “mild symptoms.” Last week foreign minister Shah Mahmood Qureshi confirmed he was infected with the virus.

Pakistan’s COVID-19 cases have increased since the government eased a lockdown in the second week of May after a partial shutdown of about two months. The south Asian nation’s coronavirus cases have climbed to 231,818 as of Monday, with 4,762 deaths. 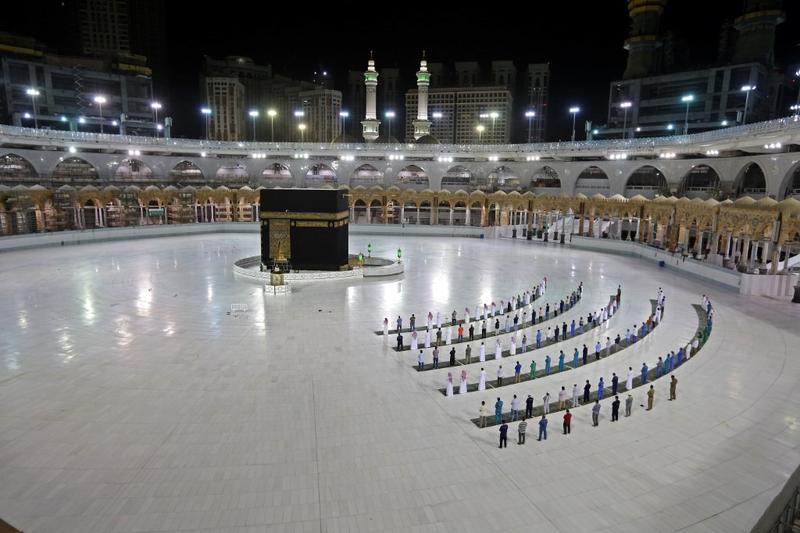 Saudi Arabia announced health protocols to prevent the spread of the new coronavirus in the 2020 haj season, banning gatherings and meetings between pilgrims, the state news agency said on Monday.

Saudi Arabia decided in June to limit the number of domestic pilgrims attending the haj to around 1,000 to prevent the spread of the coronavirus, after barring Muslims abroad from the rite for the first year in modern times.

Touching the Kaaba, the holiest site in Islam, will be banned during the haj this year, and a social distancing space of a meter and a half between each pilgrim during the rituals including mass prayers and while in the Kaaba circling area will be imposed, a statement by the Center for Disease Prevention and Control (CDC) elaborated.

Saudi Health Ministry announced on Sunday the registration of 3,580 new coronavirus infections, increasing the total number of confirmed cases to 209,509.

The death toll reached 1,916 after 58 fatalities in the last 24 hours were added in Saudi Arabia.

Saudi Arabia announced on Sunday additional facilities for foreigners who were affected by the COVID-19 lockdown, aiming to minimize the economic impacts of the coronavirus.

Singapore had 183 new cases of Covid-19 infections as of noon Monday, the Ministry of Health said. The majority of those were among work-permit holders in dormitories.

Of the new cases, 23 were in the wider community, and three were Singaporeans or permanent residents.

Of the new cases, 24 were imported from overseas, lifting the combined figure to 1,690.

One more death was confirmed, leaving the death toll at 284. The total fatality rate stood at 2.16 percent.  Of the new cases, 24 were imported from overseas, lifting the combined figure to 1,690.

Syria reported 20 new COVID-19 cases as part of a daily escalation in the number of infections in the war-torn country.

With the new infections, Syria has so far recorded 358 cases since March, including 126 recoveries and 13 deaths.

Turkey's COVID-19 cases increased by 1,148 on Sunday, raising the total number in the country to 205,758, Health Minister Fahrettin Koca said.

The Philippines reported 2,099 more coronavirus infections on Monday, bringing the total confirmed cases in the country to 46,333, its health ministry said.

The Department of Health also recorded six more deaths, raising the total number of fatalities to 1,303.

This is the second straight day that the daily tally of infections has reached more than 2,000 cases.

Health officials attribute the rising number of cases to the easing of curbs that has allowed for greater contact among the population.

Vietnam’s health ministry on Monday reported 14 new coronavirus infections, all among Vietnamese citizens held in quarantine upon their arrival from overseas.

The Southeast Asian country has been 81 days without a domestically transmitted infection due to successful programmes to contain the virus. It has yet to report any deaths from the coronavirus and has confirmed 369 cases in total, over 90% of which have recovered.

The total number of COVID-19 cases in Yemen's government-controlled provinces increased to 1,265 on Sunday, after 17 new ones were confirmed.

The ministry also announced that the death toll from the respiratory disease climbed to 338 in different areas under its control, including the southern port city of Aden.