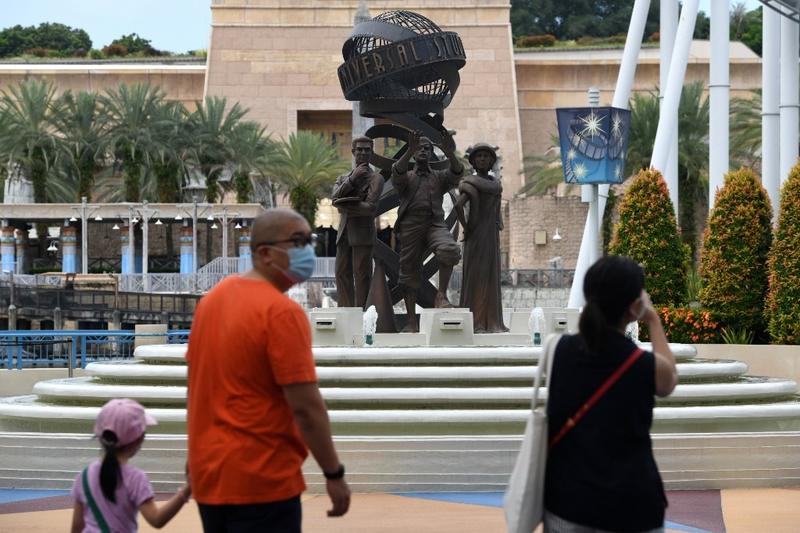 Visitors walk in the Universal Studios Singapore theme park on the resort island of Sentosa in Singapore on July 3, 2020, as the attraction reopened after being temporarily closed due to concerns about the COVID-19 novel coronavirus. (ROSLAN RAHMAN / AFP)

SEOUL / CAIRO / DUBAI / JERUSALEM / SYDNEY / TOKYO / KUWAIT CITY / SINGAPORE / HANOI / SAMUT PRAKAN - The overall coronavirus situation in Singapore remains stable and under control despite an increase in the number of new community infections seen in the past week, National Development Minister Lawrence Wong said in a post on Facebook.

The government is moving in quickly to “pick-up, ring-fence cases,” Wong said, adding that government’s joint ministerial task force continues to meet and oversee the country’s fight against the virus amid the election campaign.

Wong also said in some instances the government may have to quarantine people in an entire zone or shut down certain premises in order to effectively isolate and contain the virus.

Japan has no need to reintroduce a state of emergency to tackle the novel coronavirus, its top government spokesman said on Friday, as cases in Tokyo rose to a two-month high.

The new cases are mostly among people in their 20s and 30s, Chief Cabinet Secretary Yoshihide Suga told reporters, with the number of serious cases declining.

New daily cases in the capital have exceeded 50 over the last week, with Tokyo reporting more than 120 on Friday, up from 107 the day before, the Nikkei newspaper reported, as the virus spreads among nightlife workers.

The state of emergency was lifted on May 25. The pandemic is dominating Sunday's gubernatorial election campaign, with the incumbent, Yuriko Koike, looking set to win easily.

Australia reported a drop in new coronavirus cases on Friday, with a surge in the second most populated state Victoria appearing to have eased, although more than 10,000 people have refused to be tested in hotspot suburbs of Melbourne.

There were 66 new cases in Victoria on the second day of reimposed lockdowns in more than 30 suburbs mostly north of Melbourne. That was down from more than 70 new cases in each of the previous four days.

Kim Jong-un, the leader of Democratic People's Republic of Korea (DPRK), told a meeting of the politburo of the Workers Party the country had stopped the novel coronavirus from making inroads in the country, state news agency KCNA said on Friday.

"We have thoroughly prevented the inroad of the malignant virus and maintained a stable anti-epidemic situation despite the worldwide health crisis, which is a shining success achieved," Kim Jong-un said in a statement carried by KCNA.

He warned against self-complacency or relaxation in the anti-epidemic effort and urged its people to maintain "maximum alert", KCNA said in a statement.

The DPRK has reopened schools but kept a ban on public gatherings and made it mandatory for people to wear masks in public places as part of its response to the coronavirus threat, a World Health Organization (WHO) official said on Wednesday.

While the country has not confirmed any infections, its public health ministry has reported all 922 people checked so far have tested negative. Hundreds of people, mostly cargo handlers at seaports and land borders, are regularly quarantined for monitoring.

India's health ministry on Friday morning said 379 new deaths due to COVID-19, besides fresh 20,903 positive cases, were reported during the past 24 hours across the country, taking the number of deaths to 18,213 and total cases to 625,544.

"As on 8:00 a.m. (local time) Thursday, 18,213 deaths related to novel Coronavirus have been recorded in the country," read the information released by the ministry. 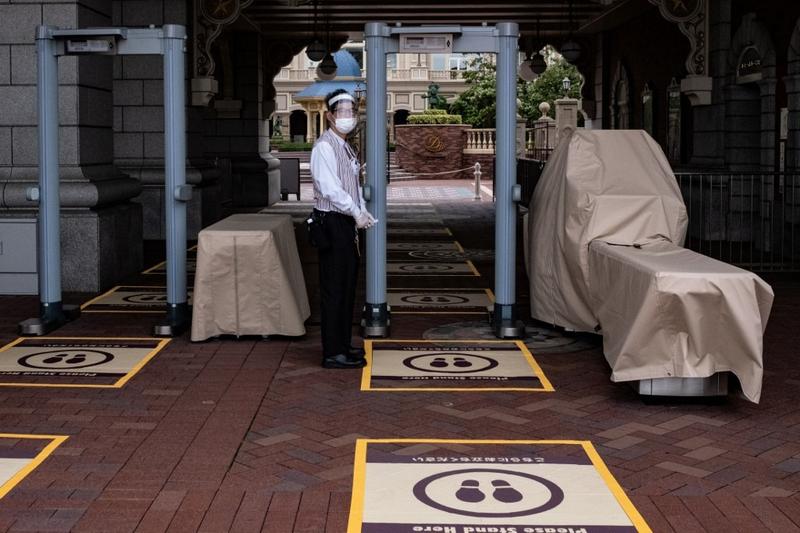 A staff in a face mask and face guard stands by the body temperature check point at the entrance of Tokyo Disneyland during the reopening day of the park in Urayasu, near Tokyo on July 1, 2020. (PHILIP FONG / AFP)

Yurianto also reported 49 new coronavirus deaths, taking total fatalities to 3,036, while he said 27,568 people have recovered from the virus.

Iran's confirmed novel coronavirus cases rose to 235,429 on Friday after an overnight registration of 2,566 new infections, according to official IRNA news agency.

During her daily briefing, Sima Sadat Lari, the spokeswoman for Iran's Ministry of Health and Medical Education, said out of the new cases in the past 24 hours, 1,483 were hospitalized.

The ministry said it has opened 30 centers to increase the capacity of coronavirus testing in Risafa area, the eastern bank of the Tigris River which bisects Iraq's capital Baghdad.

Israel Aerospace Industries (IAI), a government-owned corporation, announced on Thursday the signing of a historic agreement with a company from the United Arab Emirates (UAE) on collaboration in anti-coronavirus research and development.

The deal was signed with Group 42 based in the UAE's capital Abu Dhabi, despite no diplomatic relations between the Jewish state and the Arab country.

The health ministry reported 790 new coronavirus cases, bringing the total to 27,047, and two more deaths, raising the death toll to 324.

Earlier in the day, the Israeli government decided to limit gatherings in event halls, bars, nightclubs and places of worship to a maximum of 50 people, while the other indoor gatherings were limited to 20.

Kazakhstan will lock down the eastern cities of Oskemen and Semey from July 5 to curb the spread of the novel coronavirus, the governor of the Eastern Kazakhstan province said on Friday.

The Central Asian nation bordering Russia and China will impose a second nationwide lockdown from the same date, but it will be softer than the first one and will allow some movement of people between provinces.

However, governor Daniyal Akhmetov wrote on Instagram the province's main cities would be "closed" for an unspecified period of time, indicating tougher restrictions.

The former Soviet republic also locked down several industrial towns last month after lifting a nationwide "hard" lockdown in mid-May, which led to a sevenfold jump in COVID-19 cases in just six weeks. 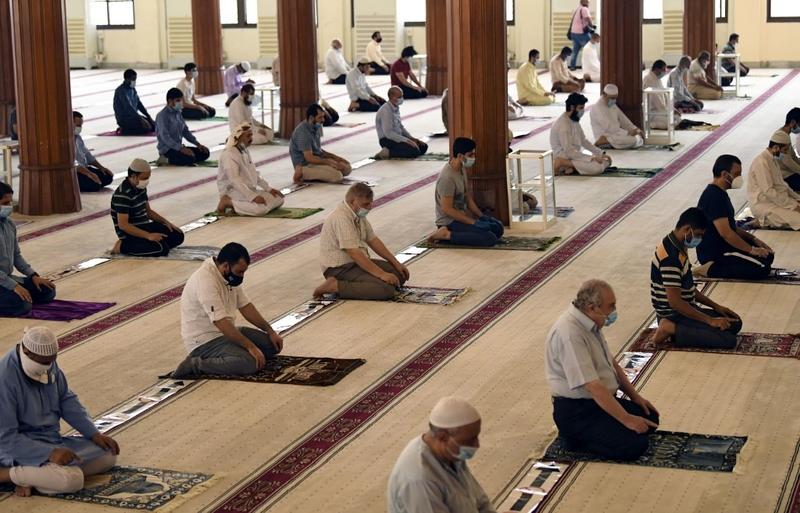 Worshippers keeping a safe distance from one another perform prayers at a mosque in the emirate of Sharjah after the United Arab Emirates reopened places of worship following months of closure to avoid the spread of the Covid-19 coronavirus, on July 1, 2020. (KARIM SAHIB / AFP)

Kuwait on Friday reported 813 new COVID-19 cases and one more death, raising the tally of infections to 48,672 and the death toll to 360, the Health Ministry said in a statement.

Currently, 9,036 patients are receiving treatment, including 144 in ICU, the statement added.

The ministry also announced the recovery of 886 more patients, raising the total recoveries in the country to 39,276.

Kuwait started on Tuesday the second phase of restoring normal life, which will last for three weeks.

In the second phase, public and private sectors will resume work with less than 30 percent capacity, in addition to the resumption of operation in shopping malls, financial sector, construction sector, retail shops, parks, and pick-ups from restaurants and cafes.

Ainura Akmatova, head of the health ministry's public health department, said at a news briefing that all the new cases are contacts of confirmed patients, except from a single imported case.

Lebanon's number of COVID-19 infections increased on Thursday by eight to 1,796, while the death toll rose by one to 35.

Government offices in Maldives will resume work from Sunday to Thursday between 8:00 a.m. and 2:00 p.m., according to a directive from the President's Office.

Meanwhile, the NCCD conducted 194 tests for the virus in the last 24 hours, all of which showed negative results, Amarjargal Ambaselmaa, head of the surveillance department of the NCCD, said at a daily press conference.

The Asian country has tallied 220 cases, all of which are imported, mostly from Russia, according to the NCCD.

Omani Ministry of Health reported 1,361 new COVID-19 cases, bringing the total number of infections to 42,555. The death toll rose to 188, after three more fatalities were reported.

Palestine on Thursday reported 322 new coronavirus cases, bringing the total number in the Palestinian territories to 3,417.

The Republic of Korea (ROK) reported 63 new coronavirus cases as of Thursday, most from domestic infections outside Seoul, triggering the return of tighter social distancing curbs in one city as the spectre of a second wave of the disease worried authorities.

For the first time in almost two months, new daily cases from other cities surpassed those from Seoul area. The southwestern city of Gwangju has recorded more than 50 cases the past few days, prompting the suspension of operations at public facilities such as public libraries and museums.

Health authorities have recently categorized social distancing rules in three stages - stage 1 being the least intense and stage 3 the toughest, where schools and businesses are urged to close.

Saudi Arabian Health Ministry announced 3,383 new coronavirus cases in the last 24 hours, increasing the total cases in the kingdom to 197,608.

The kingdom approved on Thursday additional measures to reduce the economic impacts of COVID-19.

Economy and Planning Minister Mohammed Al-Jadaan said the initiative of covering the salaries of the Saudis working in the private sector has been extended. 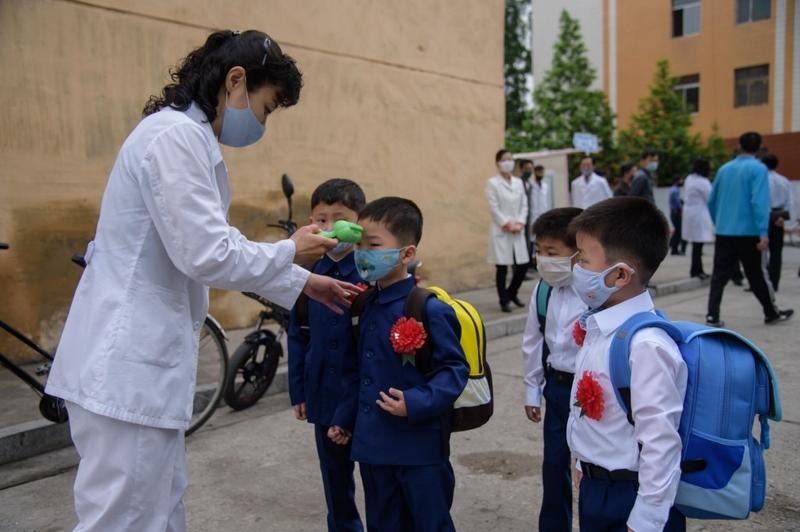 Primary school children wearing face masks as a protective measure against the COVID-19 novel coronavirus undergo a temperature check as they arrive for class at Hasin Primary School in Sosong District in Pyongyang following the re-opening of schools on July 3, 2020. (KIM WON JIN / AFP)

Thailand’s main international airport unveiled rapid coronavirus tests on Friday for some overseas arrivals after a three-month ban on foreign visitors was partially lifted this month.

All foreigners, except those with work permits, have been barred since March, but after more than five weeks with no recorded community transmission of the virus, Thailand is allowing in some groups of foreigners.

Business travellers, diplomats and government guests staying for less than 14 days are considered “fast track travellers” who will be swab tested for the disease at Suvarnabhumi airport to make ensure they are infection-free before entry.

“The test itself takes around one hour and a half,” said Suwich Thammapalo, an official of Thailand’s disease control department, adding that its use could be expanded in future for other arrivals and tourists.

The airport test, costing 3,000 baht (US$96) each, is one requirement for fast-track entry without spending 14 days in quarantine, and is required of other foreigners recently allowed in, ranging from those with resident status or family in the country, as well as international students.

About 1,700 foreigners have applied to visit Thailand for medical treatment such as cosmetic surgery or fertility treatment after a ban on medical tourism was lifted this month, said Taweesin Wisanuyothin, a spokesman for the task force on the disease.

The government is considering a plan to open more international travel with a “travel bubble” arrangement with some countries in September, he added.

As the pandemic hits travel, Thailand is expected to draw at most 8 million foreign tourists this year, down 80 percent from a year earlier, the Tourism Council of Thailand estimates, although the sector is expected to recover in 2021.

Last year, spending by a record 39.8 million foreign tourists accounted for about 11 percent of GDP.

The coronavirus has killed 58 people in Thailand, among 3,180 infections, of which 3,066 patients have recovered.

The tally of recoveries in Turkey rose to 176,965 after 1,543 more patients recovered, the minister said.

Vietnam reported no new cases of COVID-19 infection on Friday, with its total confirmed cases remaining at 355 with zero deaths so far, according to its Ministry of Health.

Meanwhile, as many as 340 patients in the country have totally recovered from the disease, Vietnam News Agency reported.

Vietnam has recorded no local transmission for 78 straight days while there are nearly 8,900 people being quarantined and monitored in the country, according to the report.

In Yemen, the health ministry said the total number of COVID-19 cases in Yemen's government-controlled provinces increased to 1,221 after 65 new cases were confirmed.