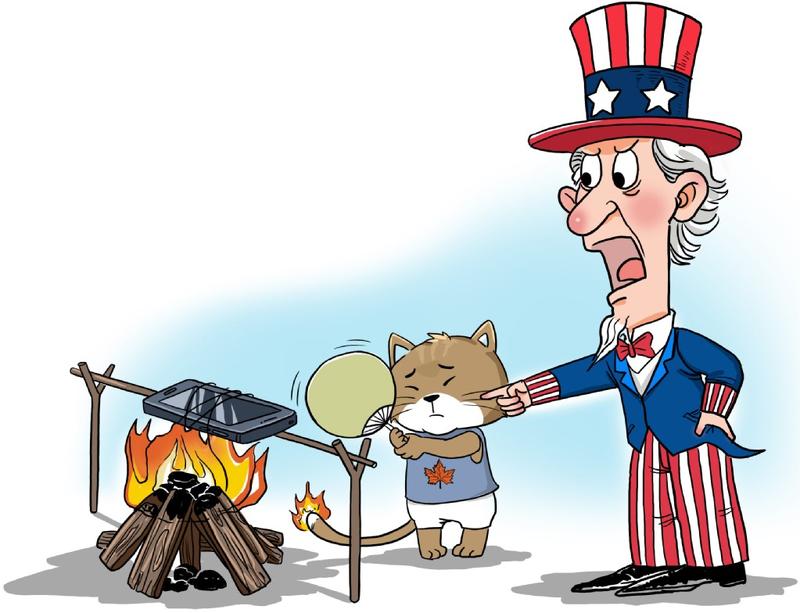 The extradition hearing of Meng Wanzhou, chief financial executive of Chinese telecommunications giant Huawei, has been deferred to 2021 due to the novel coronavirus pandemic. The decision comes in the wake of a Canadian court ruling on May 27 that the fraud charges against Meng met the legal standard for extraditing her from Canada to the US.

The US pressure and influence on Canada's "independent judicial system" are clear in Meng's case. The United States has imposed sanctions on Huawei because it cannot accept the Chinese company as a global leader in 5G technology, and is using it as a bargaining chip against China in the escalating trade war it has launched.

Meng's case is not a simple judicial matter; it is essentially a political game the US has been playing to derail China's technology development. The matter has been further complicated as Canada doesn't seem prepared to order a judicial review of the case.

First, Washington's plea for the extradition of Meng to the US is politically manipulated, which is in violation of the apolitical nature of the US-Canada extradition treaty. In fact, the US president has said he would intervene in Meng's case if it helped strike a deal with China, raising doubts about the legitimacy of the US extradition request. In such a case, the Canadian judicial authorities should have deliberated whether the US was using Meng's case as a bargaining chip against China in the Sino-US trade war. But Canada decided to meet the US extradition request in the name of judicial independence.

Second, the legal description of a criminal offense is different in the US and Canada. Under the US-Canada extradition treaty and the Canadian Extradition Act, any offense that necessitates extradition must constitute a crime in both Canada and the US to meet the "double criminality" principle. The US sought Meng's extradition claiming that she had lied to HSBC to evade US sanctions against Iran. But the fact is, Canada has not imposed such sanctions on Iran.

The Canadian court deliberately interpreted fraud in way that ensured Meng's conduct met the legal standard of "double criminality". The US' sanctions against Iran and Canada using them as its legal standard to arrest Meng suggest the US has used its long-arm jurisdiction to influence the Canadian court's order.

Third, Meng was detained after being questioned for hours at Vancouver airport by Canadian border officials at the US' request before being arrested, prompting her lawyer to say the extradition process should have been dropped as Canadian officials had abused the law.

In the name of border control, the Canadian border agency and police launched a criminal investigation against Meng, which violated her rights under the Canadian Charter of Rights and Freedoms. And by taking an exceptionally long time to produce a warrant against Meng and inform the Chinese Embassy in Canada about the case according to the Sino-Canadian consular agreement, Ottawa violated the international law. Whether the Canadian officials abused the extradition process by arresting Meng will be a focus of the next hearing.

But whatever the verdict, the Canadian government has the final say in Meng's case. One thing is certain, though, that Canada has misused discretion by accepting the US' extradition request for Meng.

If Canada fulfills all of the US' political demands against China, it will harm Sino-Canadian relations without serving the cause of the US-Canada partnership in the long run.

Also, Canada should not link the arrest of two Canadian nationals, Michael Kovrig and Michael Spavor, with Meng's case, because they were held for engaging in "activities that endanger national security" and their cases are being handled according to China's security law.

Although Canadian Prime Minister Justin Trudeau has claimed Canada's judiciary is free of political interference and asked China to understand the situation, some reports say he might have been involved in judicial interference scandals. Canada has also followed the US in accusing China of spreading the novel coronavirus across the world, undermining global cooperation in the fight against the pandemic, and criticized the national security legislation for the Hong Kong Special Administrative Region, souring bilateral relations.

Canada should realize that no responsible government can stand by when its national security is threatened by the actions of another country, in this case the US in particular. The year 2020 marks the 50th anniversary of the establishment of diplomatic relations between China and Canada. The Meng case has become a touchstone of 50 years of Sino-Canadian diplomatic relations. And since the crux of the issue is unlawful detention of a Chinese citizen by Canada on trumped-up charges, Ottawa should make a decision only after serious consideration.

The author is an assistant research fellow at the China Institute of International Studies.

The views don’t necessarily represent those of China Daily.