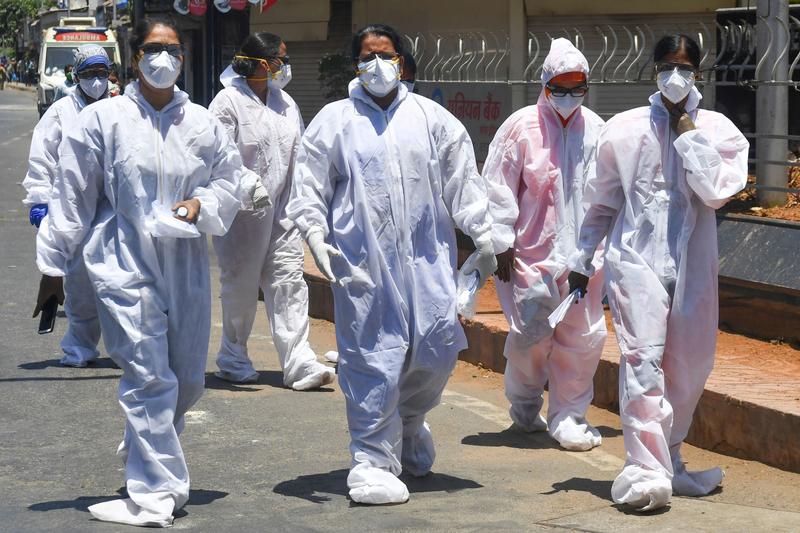 Healthcare workers wearing Personal Protective Equipment (PPE) walk out of a hospital during a government-imposed nationwide lockdown as a preventive measure against the COVID-19 coronavirus, in Mumbai on May 4, 2020. (PHOTO / AFP)

Hospital wards with corpses left unattended in hallways. Patients asked to sleep on the floor until beds open up. A woman with brain damage who died because she was refused medical help until her family could prove she was virus-free.

The public health-care system in Mumbai, epicenter of India’s worsening coronavirus outbreak, is overwhelmed as COVID-19 patients pour in and hospital staff work around the clock. Medical care for non-coronavirus patients has basically been shut off due to a lack of resources.

“We are opening new wards daily but they get filled by end of day with COVID-19 patients. It is pretty bad right now,” said Saad Ahmed, a resident doctor at state-run King Edward Memorial Hospital in central Mumbai. “All wards are now COVID-19 wards and they are full to the capacity.”

Despite a strict two-month-long lockdown, the outbreak in India’s financial capital has snowballed, with the city now accounting for more than a fifth of India’s over 5,400 deaths and 190,600 infections

Despite a strict two-month-long lockdown, the outbreak in India’s financial capital has snowballed, with the city now accounting for more than a fifth of India’s over 5,400 deaths and 190,600 infections. The pandemic’s center is shifting away from New York and Europe to nations like Brazil and India, where under-funded health care infrastructure and poor living conditions provide fertile ground for the virus.

A Twitter video earlier this month showed corpses of virus victims left on beds next to patients in a hospital ward in Mumbai’s state-run Lokmanya Tilak Hospital. The hospital probed the incident and replaced its dean. Pictures recently emerged of bodies left unattended in the hallways of King Edward Memorial hospital.

Bodies have piled up in hospitals in the last few weeks after family members refused to claim them out of a fear of infection, said Madhuri Ramdas Gaikar, a nurse at the King Edward Memorial hospital. The intense fear around the virus has created a new class of untouchables in India, with the infected and their families being shunned by their neighbors or shunted out of rented apartments.

“We used to keep the paperwork and everything else ready, still bodies were not being taken away,” said Gaikar.

Hospitals’ emergency wards are seeing twice the number of patients they have beds for, said a doctor in a state-run hospital who did not want to be named fearing repercussions from her employer. That meant one oxygen station had to service multiple patients and some were forced to share beds, she said.

The other bottleneck is in critical care facilities and health care staff -- doctors, nurses, lab technicians and cleaning staff -- as many are infected or quarantined.

“Critical patients are struggling hard to get beds everywhere in Mumbai,” said Vikas Oswal, a private sector chest physician who also sees patients in the state-run Shatabdi Hospital. “It takes 12-16 hours to find a single bed. Beds get filled up immediately with next patient in queue.”

Even as India started implementing a phased exit from the world’s biggest lockdown, Maharashtra -- the state where Mumbai is located -- on Sunday extended the stay-at-home measures in the metropolis to June 30. Some small relaxations will kick in from June 5 in Mumbai such as allowing shops and markets to open on alternate days. 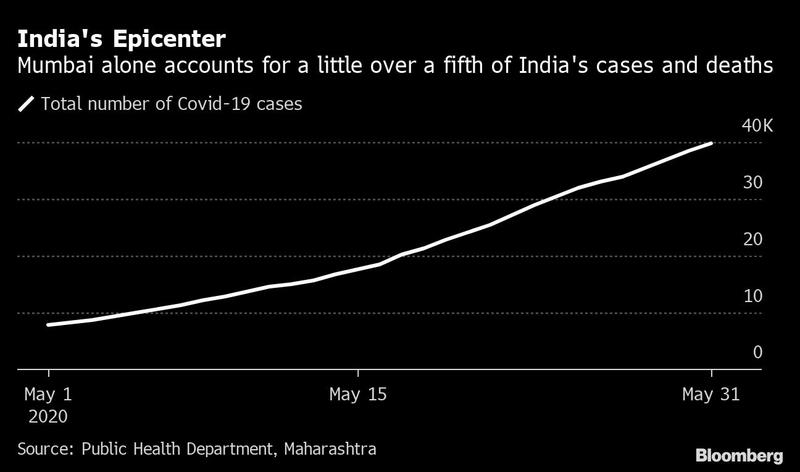 While other virus epicenters from Wuhan to New York and Bergamo in Italy have seen similarly overwhelmed hospitals, Mumbai’s situation is compounded -- some say created -- by the reluctance of its massive and better-equipped private health system to get involved in virus care out of a fear of infection.

There was a shortage of beds for Intensive Care Units, or ICUs, and critical care initially when the pandemic broke out but it has largely been mitigated now, according to Sanjay Oak, a physician heading Mumbai’s virus task force set up in April by the Maharashtra government.

The state government has taken over 80% of general category beds and all the ICU beds in the city’s private health care facilities, Oak said in an email. These beds “are displayed and alloted through a common dash board” at an affordable price, he said.

Despite these efforts, some patients are still getting crowded out.

The chaotic situation has also exposed the consequences of the social inequality that divides and defines Mumbai, where globe-trotting executives live in condominiums next to slums where their drivers, cooks and house cleaners reside

Members of a family, who did not want to be identified for fear of being stigmatized, spent a night in an ambulance after three private hospitals refused to hospitalize their elderly diabetic mother who had a fever and bouts of shivering. The private facilities insisted on a certificate showing she was virus-free, and kept redirecting her to the public hospitals.

The woman was asked to spend the night on the floor at a state-run hospital as she waited for her test results, as there were no vacant beds, said one of her relatives. The family chose to take her away and keep trying other hospitals.

S Kumar, a social worker in Mumbai, struggled to secure medical help for a woman who had suffered brain damage after a fall at home. At least three leading private hospitals insisted on a certificate saying she didn’t have Covid-19 before starting treatment, according to Kumar. The woman died before her treatment could start.

“Treatment delayed is treatment denied,” Kumar said, adding that he had seen at least half a dozen deaths in the past six weeks due to lack of timely medical care.

The chaotic situation has also exposed the consequences of the social inequality that divides and defines Mumbai, where globe-trotting executives live in condominiums next to slums where their drivers, cooks and house cleaners reside.

The city’s deep-seated issues make it the perfect breeding ground for the highly-contagious pathogen, blunting the government’s efforts. It also houses Dharavi, Asia’s most-crowded slum, where as many as eight people may be staying in a 100-square-feet tin hutment and 80 sharing a public toilet.

Stigma has complicated contact tracing and social distancing efforts especially in slum clusters with health care workers being obstructed and cops being pelted with stones.

Local authorities have been aggressively ramping up facilities, readying as many as 100,000 beds by creating quarantine facilities everywhere from a race course to a planetarium and a nature park. A new 1,000 bed COVID-19 hospital was built from scratch within two weeks and started last week. 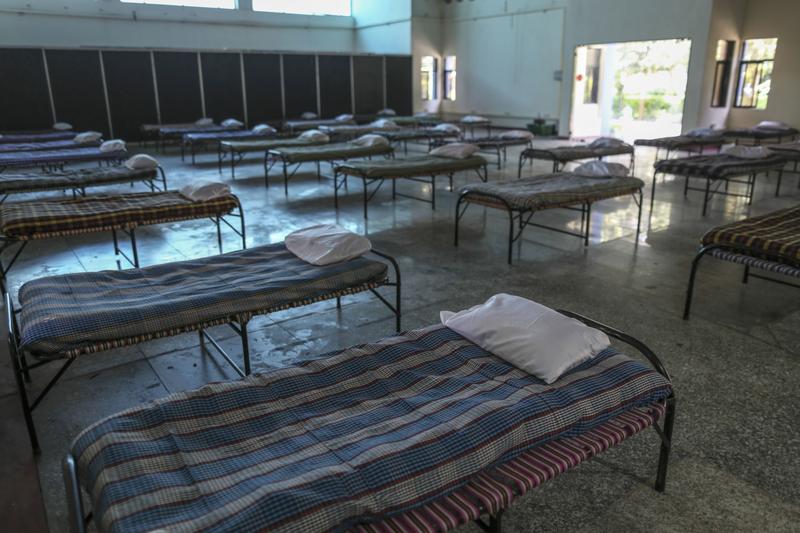 Inside a 100 bed non-critical hospital for COVID-19 treatment at the the Nehru Science Centre in Mumbai. (PHOTO / BLOOMBERG)

Aggressive disinfecting and contact tracing has helped slow the rate at which virus cases are doubling across Mumbai. In the slum cluster of Dharavi, the pace is now 20 days instead of three in April.

While there are enough beds for non-critical and asymptomatic patients, Shatabdi Hospital’s Oswal said the real crunch was in beds, ventilators and oxygen stations for critical patients.

“The health care system will soon be placed in a very difficult situation where they have to make a choice between who to provide care to and who to simply say, ‘sorry, we can’t do anything for you’,” said Vivekanand Jha, executive director of the George Institute of Global Health in India.

For doctors and nurses at the frontlines, challenges mount.

There have been instances where relatives have just left the patients in wards and taken off scared that they might catch the virus, according to Ahmed, the doctor at King Edward Memorial Hospital.

“Health care staff has taken round-the-clock care of such patients,” he said. “We don’t know their names or history but have to start their treatment anyway.”

Sword Over Your Head

Some medical workers said that media coverage of bad conditions in government hospitals was demoralizing as they have been working relentlessly for weeks.

Gaikar, the nurse at King Edward Memorial Hospital, hasn’t stayed with her nine-year-old daughter or husband for two months. Neither has she visited her elderly parents for fear of infecting them.

“It’s a very difficult fight, as your own life is at stake,” Gaikar said. “There is this sword always hanging over your head. Will I test positive when my swab is taken after the duty?”