India to enter Lockdown 5.0 on Monday with 193 new deaths 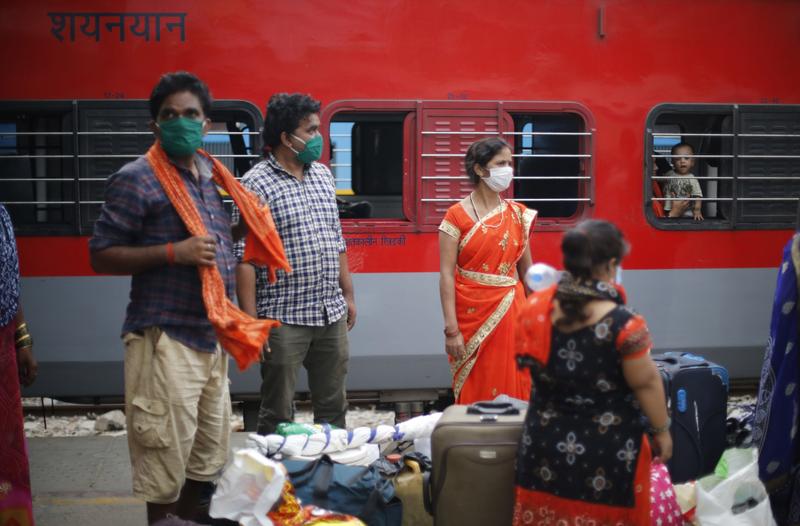 Migrant laborers stand outside a train that transported them from Maharashtra state, in Prayagraj, India, May 30, 2020. (RAJESH KUMAR SINGH / AP)

The Nepali government confirmed 189 new cases of COVID-19, increasing the total count of cases to 1,401

The Lockdown 5.0 will, however, be with some more relaxations, like reopening of shopping malls, saloons, hotels and restaurants, religious places, etc, though with restrictions like social distancing.

As many as 193 new deaths due to the COVID-19 and 8,380 new positive cases were reported since Saturday in the country.

This was the biggest spike both in the numbers of cases and deaths in the country so far.

Of these patients, seven are female and three are male, and all of them returned from the Middle East recently through relief flights arranged by the government, according to the health ministry.

Two of the cases were detected in the quarantine facilities in Paro district while eight were in quarantined facilities in Thimphu city. They would be moved to the isolation wards later Sunday, the Ministry said.

Earlier the health ministry announced that two positive cases were confirmed, a 28-year-old man and 24-year-old woman, who also returned from the Middle East.

This month saw the highest number of positive cases in the country, the ministry said.

The country has conducted more than 16,838 testes as of Sunday.

The Iraqi authorities Saturday imposed a week-long curfew to curb the latest increase in infections of coronavirus in the country, the Iraqi government said.

The decision was made after a meeting by the Higher Committee for Health and National Safety, headed by Prime Minister Mustafa al-Kadhimi, which took several measures, including imposing "full curfew in Baghdad and the Iraqi provinces for a week starting from May 31 to June 6," al-Kadhimi's media office said in a statement.

The latest restriction measure came as the Iraqi Health Ministry said in a statement that the total number of COVID-19 cases has risen to 6,179 since the outbreak of the disease in the country.

Ten of the infected people died during the day, bringing the death toll in the country to 195, while 3,110 have recovered so far, the statement said.

Jerusalem’s Al-Aqsa mosque reopened to worshippers on Sunday after a two-and-a-half month coronavirus closure, but Muslim authorities imposed some precautions as health officials warn of an uptick in local infections.

The resumption of prayers at Islam’s third-holiest site caps a sombre period for Jerusalem’s Muslims, who this year marked the holy fasting month of Ramadan and the Eid al-Fitr holiday without their usual daily visits to Al-Aqsa and the adjoining Dome of the Rock.

The Council of Islamic Waqf cited the slowed local spread of COVID-19 in lifting entry restrictions and reopening the compound’s iconic shrines, which shut on March 15.

There have been 17,000 coronavirus cases and 284 deaths in Israel, and 386 cases and three deaths in the occupied West Bank. 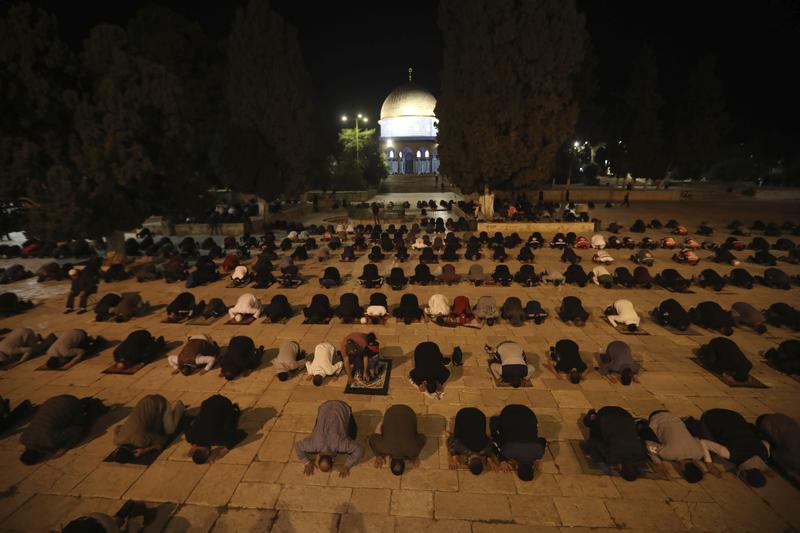 Muslim men pray next to the Dome of the Rock Mosque in the Al Aqsa Mosque compound in Jerusalem's old city, May 31, 2020. (MAHMOUD ILLEAN / AP)

The Nepali government confirmed 189 new cases of COVID-19, increasing the total count of cases to 1,401. It is the fifth consecutive day that Nepal witnessed the largest single day spike of COVID-19 cases.

Bikas Devkota, spokesperson at Nepal's Ministry of Health and Population said at a regular press briefing on Saturday that 185 men and four women were confirmed to be infected with novel coronavius.

Nepal also reported the seventh death from COVID-19 on Saturday. "A 35-year-old man from Dullu Municipality of mid-western Dailekh district, who died on Saturday morning, was tested positive for novel coronavirus," Ministry of Social Development under Karnali Provincial government of Nepal said in a press statement on Saturday.

As the number of cases is rising rapidly, the Nepali government on Saturday decided to extend the lockdown till June 14, and continue to suspend cross-border movement of people and air travels till June 30.

The number of confirmed COVID-19 cases in Pakistan has risen to 69,496 with 1,483 deaths, according to data updated by the country's health ministry Sunday morning.

A total of 3,039 new cases and 88 deaths were reported in the last 24 hours, the statistics revealed.

Overall, 42,742 patients are under treatment in different hospitals while 25,271 have recovered completely, which is 36.4 percent of the total confirmed cases.

Special Assistant to the Prime Minister on Health Zafar Mirza announced on Saturday that wearing masks at crowded places was declared mandatory to prevent the spread of the coronavirus.

The Philippines will resume domestic travels beginning on June 1 as the country starts further loosening coronavirus lockdown in the capital Manila and some parts of the country, the Ninoy Aquino International Airport (NAIA) said on Saturday.

In an advisory, NAIA said that most of the international flights "will not be happening in the immediate future" due to the travel bans imposed around the world in connection with the COVID-19 pandemic. 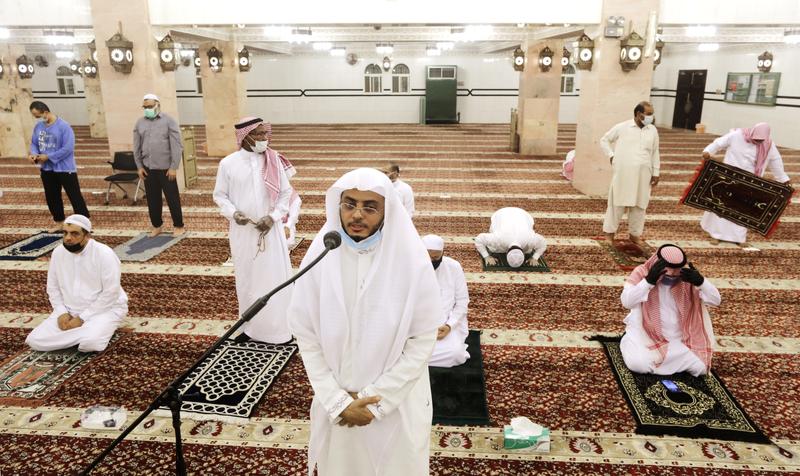 With the new infections, the accumulated cases rose to 83,384 while 22 fatalities reported, bringing the death toll to 480.

Saudi Arabia has started gradual steps to ease precautionary measures against the spreading of the virus.

Singapore has confirmed 518 more coronavirus infections, the health ministry said on Sunday, taking its tally to 34,884.

Migrant workers living in dormitories make up the vast majority of the new cases, the ministry said in a statement.

Thailand reported four new coronavirus cases on Sunday and no new deaths, taking the total number of infections to 3,081 with 57 deaths since January.

The new patients had arrived in Thailand from the United Arab Emirates, Turkey, and Saudi Arabia and have been in state quarantine, said Panprapa Yongtrakul, a spokeswoman for the government’s Centre for COVID-19 Situation Administration.

Local infections have slowed and over the last two weeks, around 80 percent of new cases were Thais who had returned from abroad, Panprapa added.

Thailand will on Monday begin reopening more businesses classified as medium to high risks, including cinemas and gyms.

The United Arab Emirates (UAE) on Saturday announced 726 new COVID-19 cases, bringing the total confirmed cases in the country to 33,896.

UAE's Ministry of Health and Prevention (MoHAP) said in a statement the new cases which include many nationalities are in a stable condition and receiving medical treatment.

It said 449 more patients have made full recovery from the virus, taking the tally of the UAE's recoveries to 17,546.

The UAE was the first among the Gulf countries to report COVID-19 cases.

Yemen's health ministry on Saturday confirmed 27 new COVID-19 cases, bringing the total tally of infections to 310 in the country's provinces controlled by the government.

According to a brief statement released by the country's supreme national emergency committee, "during the past 24 hours, the health teams officially registered 27 new COVID-19 cases in a number of provinces controlled by the government."

Meanwhile, the death toll from the deadly respiratory disease climbed to 77 after 12 new deaths were recorded in the areas controlled by the Yemeni government.

The pro-government health authorities said also that the number of recoveries has increased to 13 since the outbreak of coronavirus on April 10.