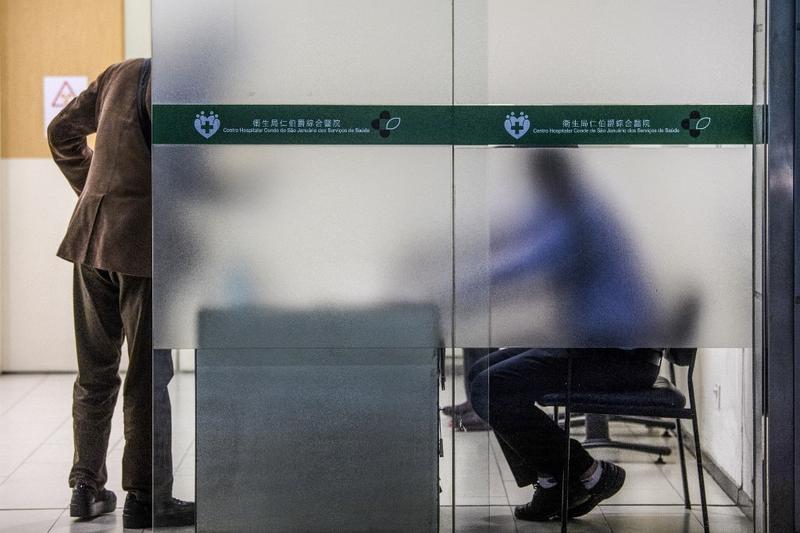 A member of security (right) speaks to a man at the Conde Sao Januario Hospital in Macao on Jan 22, 2020, after the Special Administrative Region reported its first case of the new coronavirus that originated from Wuhan in China. Macao reported its second case on Jan 23, 2020. (ANTHONY WALLACE / AFP)

The pneumonia outbreak so far resulted in 17 deaths, all in central China's Hubei province, according to the National Health Commission

A 66-year-old man traveling from Wuhan of central China was sent to Centro Hospitalar Conde de Sao Januario Wednesday afternoon, after the health authorities at Border Gate checkpoint found he had fever, with his body temperature registering 38.7 degrees centigrade.

He tested positive for novel coronavirus at the hospital and has been quarantined. His four family members traveling with him have also been quarantined for medical observation.

In Beijing, Chinese health authorities announced Thursday that 571 confirmed cases of pneumonia caused by the novel coronavirus (2019-nCoV) had been reported across 25 provincial-level regions in the country by the end of Wednesday.

A total of 393 suspected cases had also been reported, according to the National Health Commission (NHC).

The pneumonia outbreak so far resulted in 17 deaths, all in central China's Hubei province. Those who died were aged between between 48 and 89, according to the commission.

It added that most of the patients who died had underlying health issues such as cirrhosis, diabetes, high blood pressure and coronary heart disease.

As of Tuesday night, a total of 32 cases of novel coronavirus had been confirmed in Guangdong province, according to the Guangdong Health Commission.

Of the 32 people infected, 28 lived in or had recently travelled to Wuhan and the other four are their family members. So far, six family clusters have been identified in the province, involving 17 cases. No medical personnel has been infected.

Overseas, cased have been confirmed in the regions of Hong Kong, Macao, Taiwan, as well as in the United States, Japan, the Republic of Korea and Thailand.

A total of 5,897 people who came in close contact with the patients have been traced, the commission said, adding that of them, 4,928 remained under medical observation while 969 had been discharged.

Based on current knowledge, the incubation period of the virus - the interval between infection and onset of symptoms - can be as long as about 14 days, according to a prevention and control plan released Wednesday by the NHC.

Meanwhile, the general office of the NHC and the office of the National Administration of Traditional Chinese Medicine jointly issued the third trial version of the diagnosis and treatment plan Thursday.