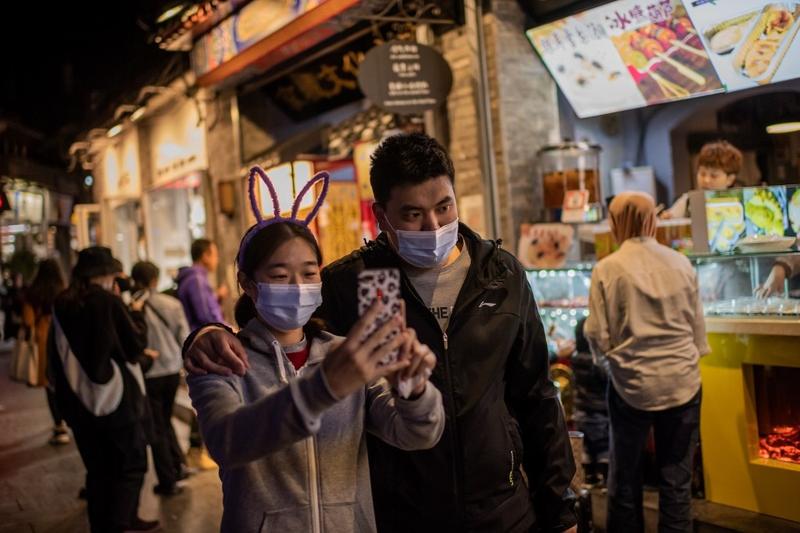 A couple wearing face masks as a preventive measure against the COVID-19 walk on a street as the woman takes pictures with her smartphone in Beijing on October 16, 2020. (NICOLAS ASFOURI / AFP)

A total of 13 confirmed cases arriving from outside the mainland were reported, the commission said in its daily report.

Of the new imported cases, five were reported in Shanghai, four in Guangdong, two in Shaanxi and one each in Tianjin and Sichuan

One new suspected COVID-19 case from outside the mainland was reported in Shanghai, but no new deaths related to the disease were reported, the commission said.

Of the new imported cases, five were reported in Shanghai, four in Guangdong, two in Shaanxi and one each in Tianjin and Sichuan.

On Saturday, 20 COVID-19 patients were discharged from hospitals after recovery on the Chinese mainland.

As of Saturday, the total number of confirmed COVID-19 cases on the mainland had reached 85,672, including 252 patients, five of whom were in severe condition, still being treated.

Altogether 80,786 patients had been discharged after recovery, and 4,634 had died of the disease on the mainland, the commission said.

There were four suspected COVID-19 cases on the mainland, while 8,265 close contacts were still under medical observation after 343 were discharged Saturday, according to the commission.

The commission said 389 asymptomatic cases, including 388 from outside the mainland, were still under medical observation.

By Saturday, 5,237 confirmed cases, including 105 deaths, had been reported in Hong Kong Special Administrative Region (SAR), 46 cases in Macao SAR, and 535 cases, including seven deaths, in Taiwan.

A total of 4,963 COVID-19 patients in Hong Kong SAR, 46 in Macao SAR and 491 in Taiwan had been discharged from hospitals after recovery.