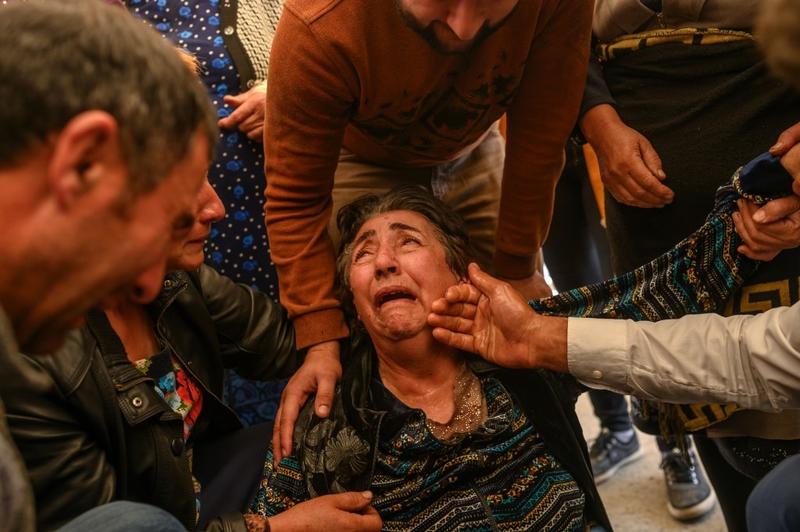 Relatives of Royal Sahnazarov, his wife Zuleyha Sahnazarova and their daughter Medine Sahnazorava, who were killed when a rocket hit their home, mourn during their funeral in the city of Ganja, Azerbaijan, on October 17, 2020 during fighting over the breakaway region of Nagorno-Karabakh. (BULENT KILIC / AFP)

It is the second ceasefire both sides have agreed on in weeks. The first came on Oct 10, following lengthy negotiations in Moscow on Oct 9.

It is the second ceasefire both sides have agreed on in weeks. The first came on Oct 10, following lengthy negotiations in Moscow on Oct 9

Armenia and Azerbaijan have been at loggerheads over the Nagorno-Karabakh region since 1988. Peace talks have been held since 1994 when a ceasefire was reached, but there still have been sporadic minor clashes.

Meanwhile, Pakistan on Saturday rejected as "baseless and unwarranted" comments by Armenian Prime Minister Nikol Pashinyan that Pakistani special forces are fighting alongside the Azerbaijani army in the ongoing conflict.

"We have seen the transcript of Armenian prime minister's interview on Oct 15 with a Russian TV referring to some unsubstantiated reports alleging involvement of Pakistani special forces alongside Azerbaijani army in the ongoing conflict. We categorically reject these baseless and unwarranted comments by the Armenian prime minister," the Foreign Ministry of Pakistan said.

A foreign ministry statement said President Ilham Aliyev of Azerbaijan has also clarified his stance on the matter stating that Azerbaijani forces are strong enough to defend their homeland and do not need the help of foreign forces.