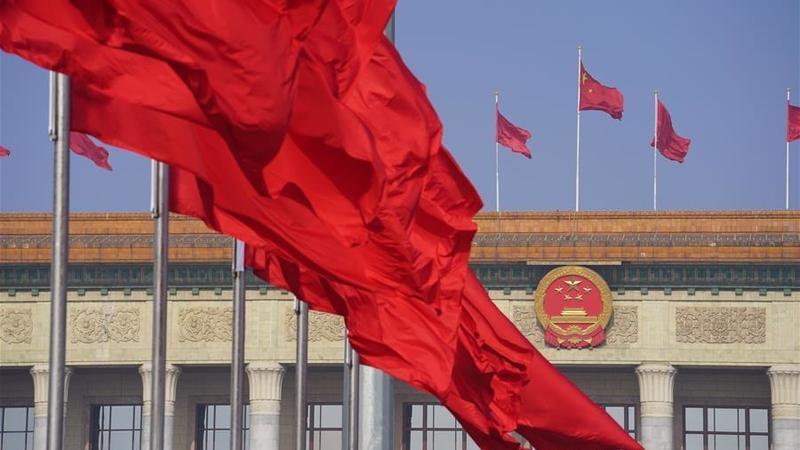 Photo taken on May 22, 2020 shows flags on the Tian'anmen Square and atop the Great Hall of the People in Beijing, capital of China. (XING GUANGLI / XINHUA)

BEIJING - China's top legislature on Saturday passed a law on export control, which will go into effect on December 1.

With detailed stipulations on export-control lists and measures, the law was adopted after the third reading at a bimonthly session of the Standing Committee of the National People's Congress (NPC).

With detailed stipulations on export-control lists and measures, the law was adopted after the third reading at a bimonthly session of the Standing Committee of the National People's Congress (NPC)

China may take countermeasures against any country or region that abuses export-control measures and poses a threat to China's national security and interests, according to the law.

The law also clarifies that technical documentation related to the items covered by the law is also subject to export-control stipulations.

Export control is a common international practice in which a country prohibits or restricts the export of specific items, such as nuclear materials, in order to fulfil its international obligations, such as non-proliferation, while safeguarding its own national security and development interests.

The Export Control Law was one of several legislative measures that the Standing Committee of the NPC adopted before it closed its legislative session Saturday in Beijing.

The approved revision to the Law on the Protection of Minors strengthens protection of the underaged youth in cyberspace.

Internet product and service providers shall not offer minors with products and services that induce addiction, according to the revised law.

Providers of online services, including game, livestream, audio and video, and social media, shall set up corresponding functions such as time limit and consumption limit for minors. The minors who are victims of cyberbullying and their parents and guardians have the right to inform the Internet service providers to take measures such as deleting, blocking or disconnecting links, it added.

The law provides for the establishment of 11 basic systems for biosecurity risk prevention and control, such as biosecurity risk monitoring and early warning, risk investigation and assessment, and information sharing.

It also has provisions on the prevention of and response to specific biosecurity risks, including major emerging infectious diseases, epidemic and sudden outbreaks, and biotechnology research, development and application. The law will take effect on April 15, 2021.

At the meeting, Li stressed earnestly implementing the passed laws and undertaking publicity activities to increase the public appeal of the new legislation.

The lawmakers ratified amendments to the annexes to the Basel Convention, as well as extradition treaties with Cyprus and Belgium, respectively.

They also adopted other items on the session's agenda, including deputies' qualifications and personnel matters.

After the meeting, Li presided over a lecture.