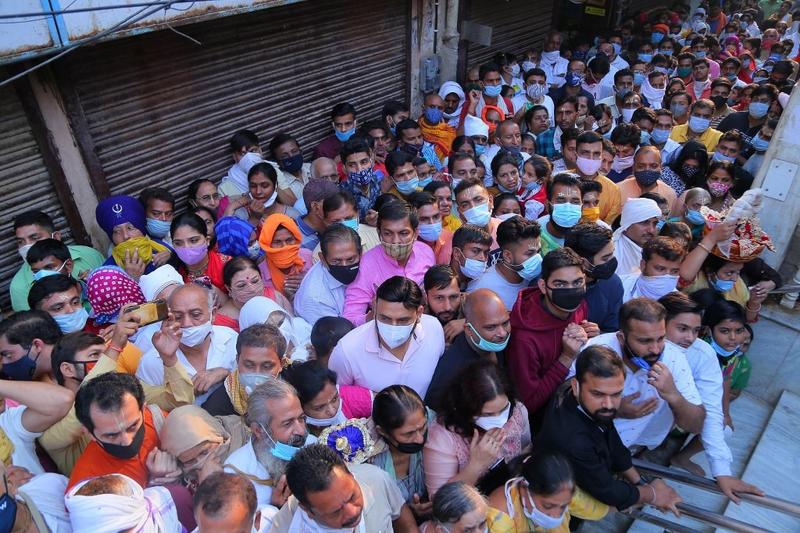 There are now 795,087 active cases in the country, while 6,524,595 people have been successfully cured and discharged.

This is the first time when the number of active COVID-19 cases has fallen below the 800,000-mark since the pandemic peaked in India.

India is identifying 300 million people who will receive the initial dose of a coronavirus vaccine, the Times of India newspaper reported on Saturday.

According to the draft of the vaccine implementation plan, priority will be given to high-risk populations, including healthcare workers, police, sanitation workers, elderly people, and those with co-morbidities, the report read, citing sources it did not identify.

Victoria, the state at the center of Australia’s coronavirus outbreak, has recorded just one new case overnight and no deaths, raising pressure on authorities to ease lockdown restrictions.

The 5 million residents of the state capital, Melbourne, remain under stay-at-home orders until the rolling 14-day average drops below 5 new cases and there are fewer than five cases with an unknown source. Critics, including the federal health minister, say the target is too onerous, and that the prolonged lockdown is risking people’s mental health and weighing on the national economy.

State Premier Daniel Andrews is due to address the media on Sunday and is being urged to ease restrictions. Prime Minister Scott Morrison again weighed into the issue on Friday.

Meanwhile, the fledgling travel bubble between Australia and New Zealand hit an early snag after 17 passengers who flew into Sydney on Friday broke the rules and caught a connecting flight to Melbourne.

In an effort to boost tourism, Australian Prime Minister Scott Morrison’s government is encouraging visitors from New Zealand, which has crushed community transmission of COVID -19, and says they can enter the country without having to undergo hotel quarantine for 14 days.

According to the ministry, 4,048 more people were discharged from hospitals, bringing the total number of recovered patients to 281,592.

The death toll from the coronavirus in Iraq rose to 10,142 after 56 fatalities were added, while the total recoveries increased to 353,962 as 3,210 more patients recovered.

Hassan al-Khalatti, a member of the health parliamentary committee, told the official Iraqi News Agency that the health authorities are planning to close epidemiological wards in some hospitals and rely instead on a central hospital in each province for coronavirus patients.

In Israel, 1,695 new COVID-19 cases were recorded, taking the tally of coronavirus infections to 301,896. It marked a fourth consecutive day of decrease in the number of new cases.

The Israeli Prime Minister's office and the Health Ministry announced earlier on the day that the government has approved new coronavirus regulations for the first phase of exiting the lockdown, which will be in effect from Oct. 18 until Oct. 31.

"Winter season is about to begin in Lebanon and we fear an increase in COVID-19 cases in this coming period," he said, urging people to be very cautious by taking serious precautionary measures.

Deaths from COVID-19 in Nepal crossed 700 mark on Friday with 21 new deaths in the last 24 hours, Nepal's Ministry of Health and Population said.

As the coronavirus crisis deepens in the Himalayan country with infections spreading in the communities, the fatality rate is also rising rapidly in recent days.

"Total deaths from COVID-19 till Friday reached 715 with new 21 deaths in the last 24 hours," said spokesperson at the Health Ministry Jageshwor Gautam.

It is the second time that Nepal witnessed over 20 deaths in a single day. Earlier, 22 deaths were reported on Oct. 11, the highest single day fatality in the South Asian country.

About 500 seafarers returned to Myanmar on Friday after they were stranded abroad due to suspended commercial flights amid the coronavirus pandemic, the state-controlled Global New Light of Myanmar reported. 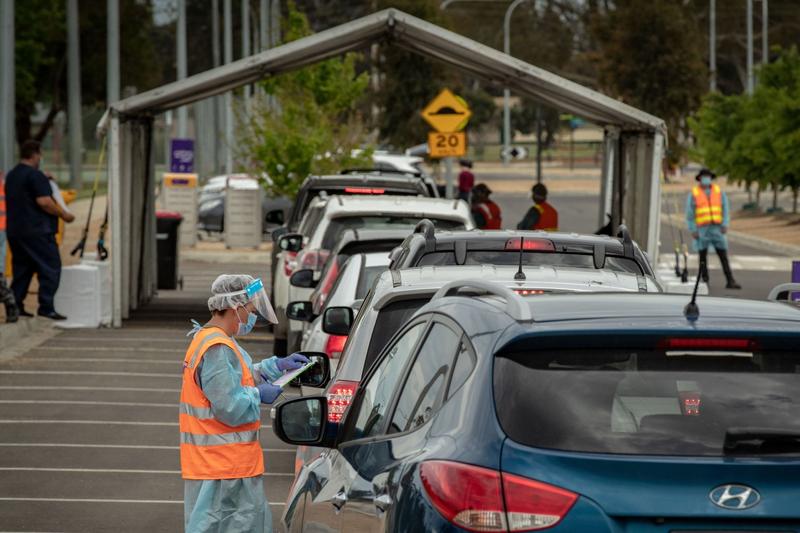 People get tested for COVID-19 at a drive through testing clinic in Shepparton, Australia on Oct 15. (PHOTO / BLOOMBERG)

New Zealand reported three new cases of COVID-19 on Saturday, said the Ministry of Health in a statement.

According to the ministry, all three cases were imported cases detected in managed isolation facilities. The first case arrived from Britain via Singapore on Oct. 9. The second and third imported cases arrived from the United Arab Emirates on Oct. 13.

The total number of confirmed cases of COVID-19 in New Zealand reached 1,527, which was the number the country reported to the World Health Organization.

The total number of active COVID-19 cases is 40, none are active community cases. There is no one in the hospital with COVID-19 in New Zealand, said the ministry.

Palestine reported 397 new coronavirus cases, taking the tally of infections in the Palestinian territories to 57,838, including 50,657 recoveries and 6,709 deaths.

The death toll from the coronavirus in the country rose to 9,153 after 73 new fatalities were added in the past 24 hours and the total recoveries increased to 301,098 with an addition of 1,419 more ones.

Singapore’s active coronavirus cases fell to the lowest level in seven months as the government reigns in local transmissions. There were 89 active cases in the city-state, falling below 100 for the first time since March 12, the Ministry of Health said Friday.

Nearly 5,000 COVID-19 cases have been reported in Syria since March amid preventive measures undertaken by the Syrian health authorities.

The Syrian Health Ministry said 56 new COVID-19 cases were reported on Friday, bringing the overall number of infections that have been registered in the country since March to 4,987.

That was the number reported in governmentp-controlled areas in the country.

Thailand has recorded its first two locally transmitted cases of the coronavirus in more than one month, the COVID-19 administration center said on Saturday.

It said in its daily report that the cases were among two Myanmar nationals living near the border with Myanmar, where infections have been surging recently.

The two were tested on Oct. 13. They showed no symptoms but results were positive, the center said in the statement. The last known local case was in early September. There were also 8 imported cases reported.

Thailand's Ministry of Public Health said on Friday that it will be implementing the Swiss cheese model to stem the spread of COVID-19.

According to Suwannachai Wattanayingcharoenchai, director general of the ministry's Department of Disease Control, the Swiss Cheese Model refers to the seven slices of Swiss cheese.

He explained that each intervention, including physical distancing, mask-wearing, hand washing and disinfecting, is depicted as an imperfect barrier to virus transmission due to their weaknesses just as cheese slices with holes.

The number of confirmed COVID-19 cases in the Philippines surged to 354,338 after the Philippines' Department of Health (DOH) reported 2,673 new daily cases on Saturday.

The DOH said that the number of recoveries also rose to 295,312 after 539 more patients recovered. Meanwhile, 73 more patients died from the viral disease, bringing the death toll to 6,603.

At the same time, 1,618 more patients have recovered from the virus, taking the tally of recoveries in the UAE to 104,943, UAE's Ministry of Health and Prevention said. It also confirmed three more deaths, pushing the country's death toll to 455.

Meanwhile, 73 people died in the past 24 hours, taking the death toll to 9,153, the Turkish Health Ministry announced.

In addition, 1,419 patients recovered in the last 24 hours, raising the total recoveries to 301,098 in Turkey since the outbreak.