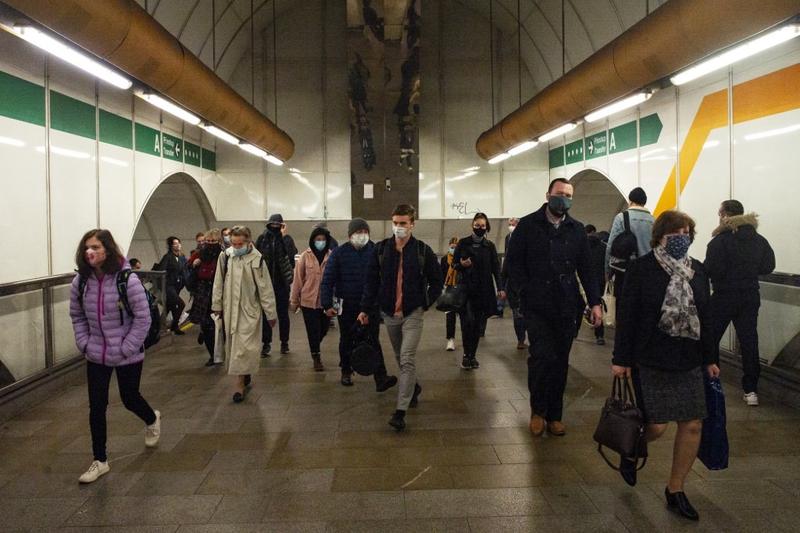 Passengers wearing face masks walk in the corridor of a metro station on Oct 13, 2020 in Prague. (PHOTO / AFP)

The total number of cases the country has detected since March has risen to 160,112, double the number seen on Oct 2 and more than six times the amount overall before September.

According to data compiled by the Center for Systems Science and Engineering (CSSE) at Johns Hopkins University, the number of confirmed coronavirus infections has passed 39.2 million with deaths over 1.1 million.

In the Russian capital of Moscow, 4,648 new infections were reported, raising the city's total to 357,643, the center said.

Austrian Foreign Minister Alexander Schallenberg has tested positive for the coronavirus and might have caught it at a meeting with his European Union counterparts on Monday, a spokeswoman for his ministry said on Saturday.

Schallenberg’s infection raises the prospect that the EU Foreign Affairs Council was a so-called super-spreader event. His Belgian counterpart Sophie Wilmes said on Friday she was going into self-isolation with suspected symptoms.

“It is suspected that Schallenberg might have been infected at the Foreign Affairs Council in Luxembourg on Monday,” the spokeswoman said, adding that he did not have symptoms and had been tested as a routine measure.

The Bulgarian Health Ministry on Saturday morning reported a record high of 998 newly confirmed COVID-19 cases over the past 24 hours in the country, taking the national tally to 28,505.

The ministry said 306 of the new cases were registered in the country's capital Sofia, bringing the total in the city to 7,663.

Meanwhile, the country's COVID-19 death toll has reached 958 after 14 more patients died in the last 24 hours, the ministry said.

A total of 1,450 patients are hospitalized, with 76 in intensive care, and the number of infected medical workers has reached 1,520, it said. 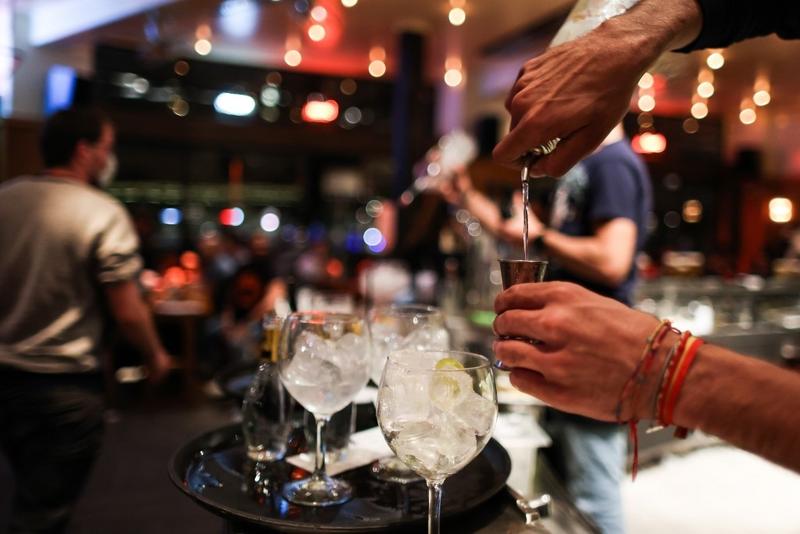 A waiter serves a cocktail at a bar on the eve of the mandatory closure of bars in Brussels, on Oct 7, 2020, to stop the spread of COVID-19. (KENZO TRIBOUILLARD / AFP)

All Belgian bars and restaurants will be forced to close for four weeks, the federal government said on Friday, in order to tackle a surging second wave of the coronavirus, with hospitals close to running out of beds.

The Belgian government also decided to impose a curfew from midnight to 5 am for a month.

“This virus is affecting our country in a very hard way,” Belgian Prime Minister Alexander De Croo told a news conference, after a five-hour meeting. “The coming weeks will be very difficult but we must take those measures to avoid the worse.”

The measures will last at least four weeks from Oct 19, with a review of their impact after two weeks.

The measures also include reducing to just one the number of people Belgians can see at close proximity outside their homes and enforcing work from home for most employees. Selling alcohol will be forbidden after 8 pm.

Belgium followed the Netherlands, which closed its bars and restaurants on Oct 13, and France in imposing a nighttime curfew.

Italy reported 10,010 new coronavirus infections on Friday, pushing the total number of current active infections to 107,312 cases, according to the latest data from the Ministry of Health.

The data showed that 6,178 coronavirus patients were hospitalized with symptoms, and 638 were taken into the ICU, according to the data.

In their latest weekly monitoring report with reference to Oct. 5-11, the Ministry of Health and the National Institute of Health (ISS) said: "We are seeing an acceleration in the evolution of the epidemic, which has entered an acute phase with a progressive increase in the number of cases."

The report added that some of Italy's 20 regions are at risk of "reaching critical levels" due to an "increase in the rate of ICU bed occupancy."

Malta will introduce the mandatory use of masks in public, as well as the closure of all pubs at 11 p.m., as the country has witnessed a surge in COVID-19 cases, Prime Minister Robert Abela announced on Friday.

The new measures were in response to a spike in new infections, with 122 new cases reported on Friday, a record number since the start of the pandemic in the country in March.

Compulsory use of masks will take effect from Saturday, while the closing time for pubs will enter into force from Monday.

The Commission for Infectious Diseases in North Macedonia has proposed a new set of restrictions as the number of new coronavirus cases in the country has surged recently, local media reported on Friday.

According to the media reports, a total ban on events, closure of all businesses by 11 pm, and operation of public transportation at 50 percent of capacity are among the new proposal.

Speaking at a press conference on Friday, Health Minister Venko Filipce told reporters that the new proposed restrictions aim to reduce the risk of virus transmission in the community.

France confirmed 25,085 COVID-19 infections in the past 24 hours, pushing the total count since the epidemic outbreak in the country to 834,770, according to data released on Friday by health authorities.

The number of new infections was lower than a record 30,621 registered on Thursday. Still, it remained at a high level unseen during the first wave.

Coronavirus-related hospitalization data continued its ascent. Up to 9,986 patients were receiving treatment in health establishments on Friday, against 9,605 a day before. The number of those who need intensive care increased by 35 to 1,785.

An additional 122 people had succumbed to the coronavirus infection in one day, taking the total to 33,303. The daily death toll is higher than  88 on Thursday and 104 on Wednesday.

At midnight Friday, a four-week curfew will take effect, locking down 20 million people from 9 pm to 6 am to stem the rapid virus spread and avoid chaos in hospitals.

Eight French senators have tested positive for COVID-19, the French Senate’s press office said Friday. One of the senators has been hospitalized, France Info reported earlier, citing anonymous sources. The cases were detected in a testing campaign among 125 of the nation’s 348 senators. 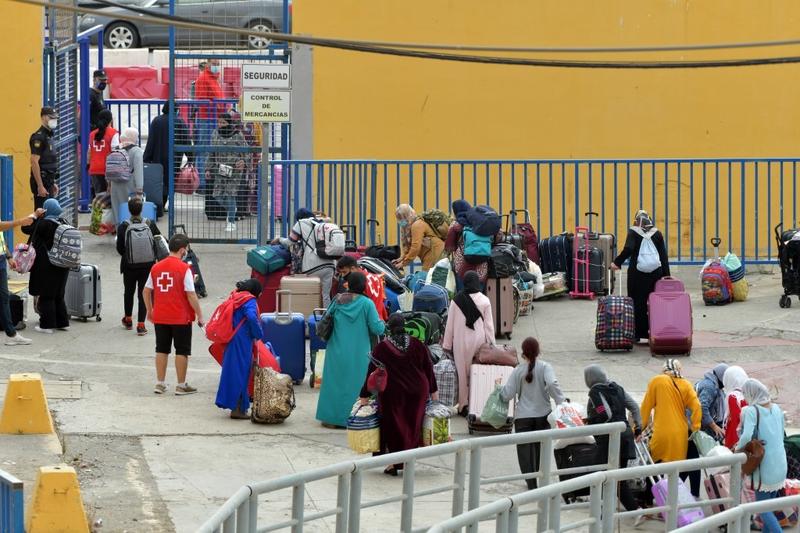 Moroccan nationals, stranded in Spain since the closure of borders in mid-March to tackle the coronavirus, go through customs prior to crossing the Spanish-Moroccan border in the Spanish enclave of Ceuta on Sept 30, 2020. (PHOTO / AFP)

Spain reported 6,591 cases, the second consecutive day with more than 6,000 infections. The nation hasn’t reached 6,000 daily infections since April, during the height of the pandemic.

The number of confirmed coronavirus cases in Germany increased by 7,830 to 348,557, data from the Robert Koch Institute (RKI) for infectious diseases showed on Saturday.

Now the total stands at 24,450 since the first infection was diagnosed on Feb. 26 in Greece, the National Public Health Organization announced.

Eight patients died since Thursday, bringing the total number of fatalities to 490, while 81 patients were currently treated in intensive care units.

The number of COVID-19 cases in the United States surpassed 8 million on Friday, according to the Center for Systems Science and Engineering at Johns Hopkins University.

Canada's daily case counts continue to rise with an average of over 2,300 new cases being reported daily during the most recent seven days, according to the Public Health Agency of Canada on Friday.

Over the past week, there have been on average 870 individuals with COVID-19 in Canadian hospitals each day and 20 deaths reported daily, the agency added.

As the resurgence of COVID-19 cases affecting many parts of the country is concerning, Canadian Chief Public Health Officer Theresa Tam Friday urged Canadians to heed the advice of local public health authorities.

Another 754 people died from the disease during the same period of time, bringing the death toll to 153,214, according to the ministry.

The number of COVID-19 infections rose to 945,354 in the past 24 hours in Colombia, after tests detected 8,372 new cases, Colombian health authorities said Friday.

The country's death toll climbed to 28,616 after 159 more COVID-19 fatalities were reported in the same period of time, while 837,001 people have recovered, according to the health ministry. 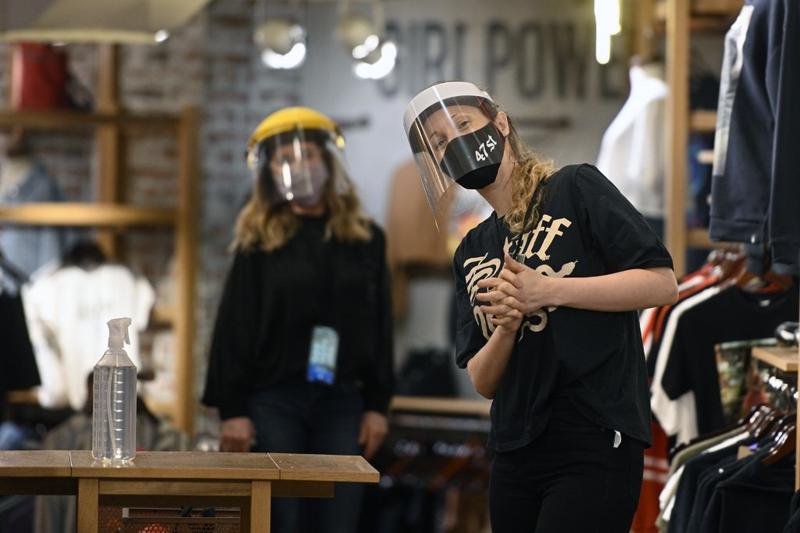 Employees of a clothing store gesture at a shopping mall in Buenos Aires, on Oct 14, 2020, on its reopening amid the new coronavirus pandemic. (JUAN MABROMATA / AFP)

Chilean Health Minister Enrique Paris said Friday that 13 regions in the country have shown a decrease in the number of new cases of the novel coronavirus (COVID-19) in the past week.

Paris also stated that the regions with the highest increase in new cases are Biobio, Los Lagos, Aysen and Tarapaca.

The total number of confirmed COVID-19 cases across the African continent has reached 1,613, 011 as of Friday, the Africa Centers for Disease Control and Prevention (Africa CDC) said.

The Africa CDC, a specialized healthcare agency of African Union Commission, said in a statement that the number of deaths due to illnesses related to the pandemic reached 39,403 as of Friday afternoon.

The Africa CDC said the number of people who have recovered from the infectious virus across the continent has reached 1,331,708 so far.

The most COVID-19 affected African countries in terms of the number of positive cases include South Africa, Morocco, Egypt, Ethiopia, and Nigeria.

Earlier in the day, Morocco increased the number of mosques allowed to reopen to 10,000 from 5,000 previously, after more than seven months of closure.

Egypt reported on Thursday late night 118 new COVID-19 infections, raising the total cases registered in the country since the outbreak of the pandemic to 105,033.

Meanwhile, 11 patients died from the novel coronavirus in the past 24 hours, bringing the death toll to 6,088, while 91 others completely recovered, increasing the total recoveries in the country to 98,011.

Total coronavirus recoveries in Egypt currently exceed 93 percent of the total cases registered in the most populous Arab country.