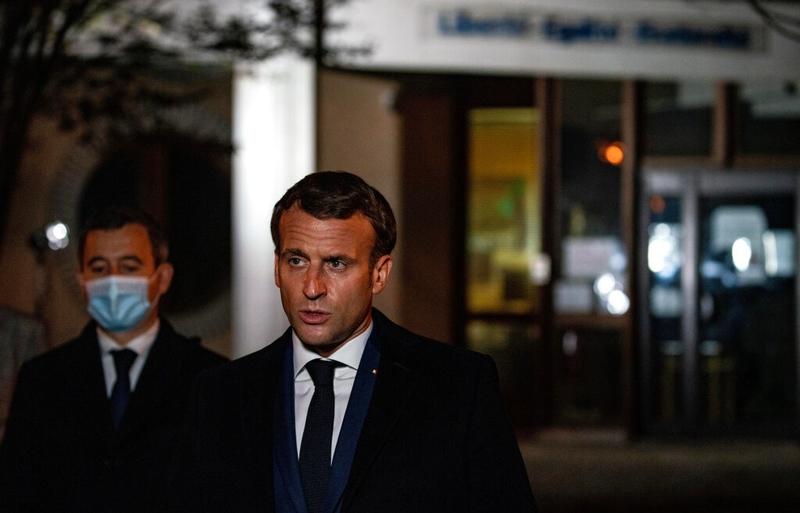 French President Emmanuel Macron speaks in front of a high school Oct 16, 2020 in Conflans Sainte-Honorine, northwest of Paris, where a history teacher who opened a discussion with high school students on caricatures of Islam's Prophet Muhammad was killed. (ABDULMONAM EASSA, POOL VIA AP)

PARIS - French police have arrested nine people after a suspected Islamist sympathizer beheaded a school teacher on the street of a Paris suburb on Friday, police sources said.

Investigators were trying to establish whether the attacker, who was shot dead by police a few streets away from the scene of the attack, had acted alone or had accomplices. French media reported that he was an 18-year-old of Chechen origin.

Our compatriot was flagrantly attacked, was the victim of an Islamist terrorist attack. They won’t win... We will act. Firmly, And quickly. You can count on my determination.

Witnesses heard the assailant shout “Allahu Akbar” or “God is Greatest”, a police source said. His victim, a 47-year-old history teacher, had earlier this month shown his pupils cartoons of the Prophet Mohammad in a civics class on freedom of expression.

“Our compatriot was flagrantly attacked, was the victim of an Islamist terrorist attack,” Macron told the press after visiting the middle school hours after the attack struck. “They won’t win... We will act. Firmly, And quickly. You can count on my determination.” 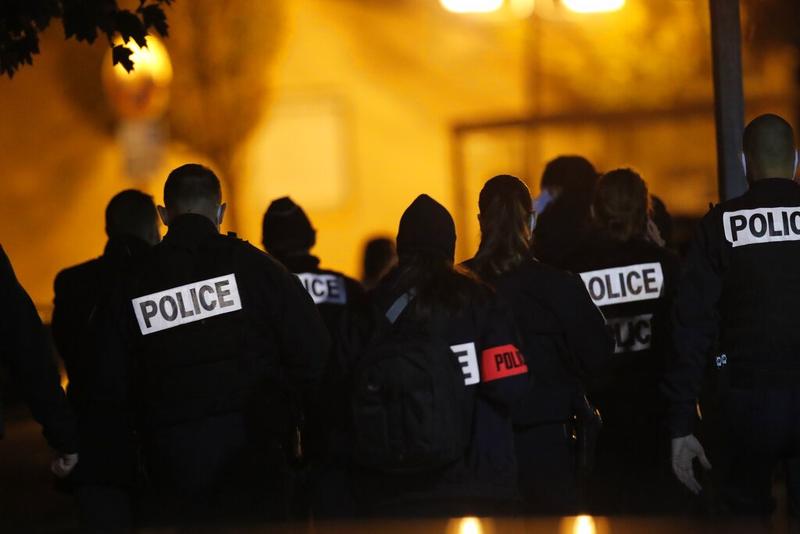 French police officers gather outside a high school after a history teacher who opened a discussion with students on caricatures of Islam's Prophet Muhammad was beheaded, Oct 16, 2020 in Conflans-Saint-Honorine, north of Paris. (MICHEL EULER/AP)

Four relatives of the attacker, including a minor, were detained in the immediate hours after the attack in the middle-class suburb of Conflans-Sainte-Honorine, the police sources said. The area is a middle-class neighborhood with many residents who commute to work in Paris.

Five more were detained overnight, among them two parents of pupils at the College du Bois d’Aulne where the teacher was employed.

Muslim leaders condemned the killing, which many public figures perceived as an attack on the essence of French statehood and its values of secularism, freedom of worship and freedom of expression.

Tareq Oubrou, the imam of a Bordeaux mosque, denied the killing marked a clash of civilizations.

“It is not a civilization that kills an innocent person, it is barbarity,” Oubrou told France Inter, adding that the litany of deadly attacks by Islamist militants or their sympathizers was devastating for France’s Muslim community. 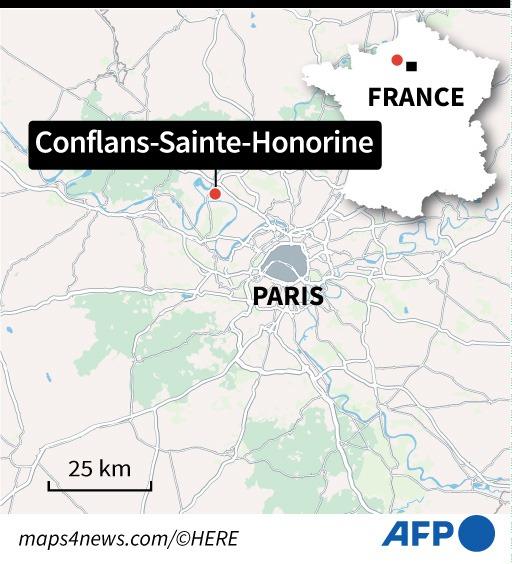 "Tonight, it is the Republic that is under attack with the despicable assassination of one of its servants, a teacher," Education Minister Jean-Michel Blanquer tweeted.

"Unity and firmness are the only answers to the monstrosity of Islamist terrorism," he added.

In a Twitter message, ex-president Francois Hollande denounced "a terrible assassination of a teacher."

France has over the past years seen a series of violent attacks by Islamist militants, including the 2015 Charlie Hebdo killings, and bombings and shootings in November 2015 at the Bataclan theatre and sites around Paris that killed 130 people.

Less than a month ago, a man originally from Pakistan used a meat cleaver to attack and wound two people who were on a cigarette break outside the offices where Charlie Hebdo was based at the time of the 2015 attack.

The issue of the cartoons had been revived last month when Charlie Hebdo decided to re-publish them to coincide with the start of the trial of accomplices in the 2015 attack.

Al-Qaeda, the militant Islamist group that claimed responsibility for those killings, threatened to attack Charlie Hebdo again after it republished the cartoons.

The magazine said last month it published to assert its right to freedom of expression, and to show it would not be cowed into silence by violent attacks. That stance was backed by many prominent French politicians and public figures.

Reacting to Friday’s attack outside the school, Charlie Hebdo wrote on its Twitter account: “Intolerance has crossed a new threshold and does not seem to give ground to anything in imposing its terror on our country.”