Flowers in the yard

A woman has turned an old house into a mixed-flavor restaurant, reports Yang Yang in Tacheng, Xinjiang Uygur autonomous region. 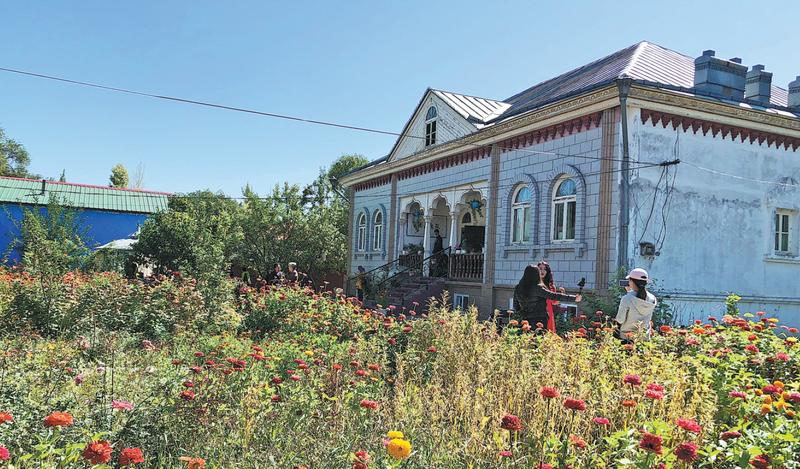 After dancing with friends who have come to help with her daughter's wedding, Khalitan Ylahon, in her 50s, walks into her kitchen in a Russian-style house in Tacheng city, Northwest China's Xinjiang Uygur autonomous region, to check the oven.

Wearing a red dress and matching lipstick, she has been roasting a traditional Russian dish that is now ready. The mixed aroma of roasted chicken drumsticks, potatoes, apples and sweet potatoes fills the kitchen and corridor. Next, she will bake lamb-stuffed buns, a traditional Uygur snack that is popular in Xinjiang.

The more ethnic groups there are, the more friends you can have, and the more you can gain, because a lot of great things happen

Situated along Xinjiang's northwestern border with neighboring Kazakhstan, Tacheng is the farthest point from any ocean than anywhere else on Earth. Covering an area of 4,356 square kilometers, Tacheng has a population of 170,000 from 25 ethnic groups, including Han, Kazak, Hui, Uygur, Daur and Russian. For about one millennium, since the Tang Dynasty (618-907), it has been an important town on the Silk Road as the "Central Asian trade corridor".

Khalitan is the owner of the yard, Rose Manor, where she has grown flowers on empty land. Three years ago, after her youngest daughter was admitted to the China Conservatory of Music in Beijing, at the suggestion of the local government, she returned from Urumqi, the regional capital, and transformed the house, that was built more than 20 years ago, into a restaurant with an ethnic flavor. The style of the house and furnishings also have Russian influence.

"We receive reservations, but only one table at most for 20 diners a day, because the space is limited," she says in fluent Mandarin.

Rose Manor is located in Tacheng's Haerdun community that has a population of 3,821, or 1,510 households, from 14 ethnic groups, including Han, Kazak and Uygur.

Her family is among 274 families in the community where interethnic marriages take place. Her family has six ethnicities.

The biggest attraction of Rose Manor is that diners can eat snacks and dishes of five or six ethnicities at the same time, including Russian bread and salad, Kazakh fried snacks, Tatar cakes, pilaf and puff pastry, baked stuffed buns and lamb shashlik, dumplings and so on. 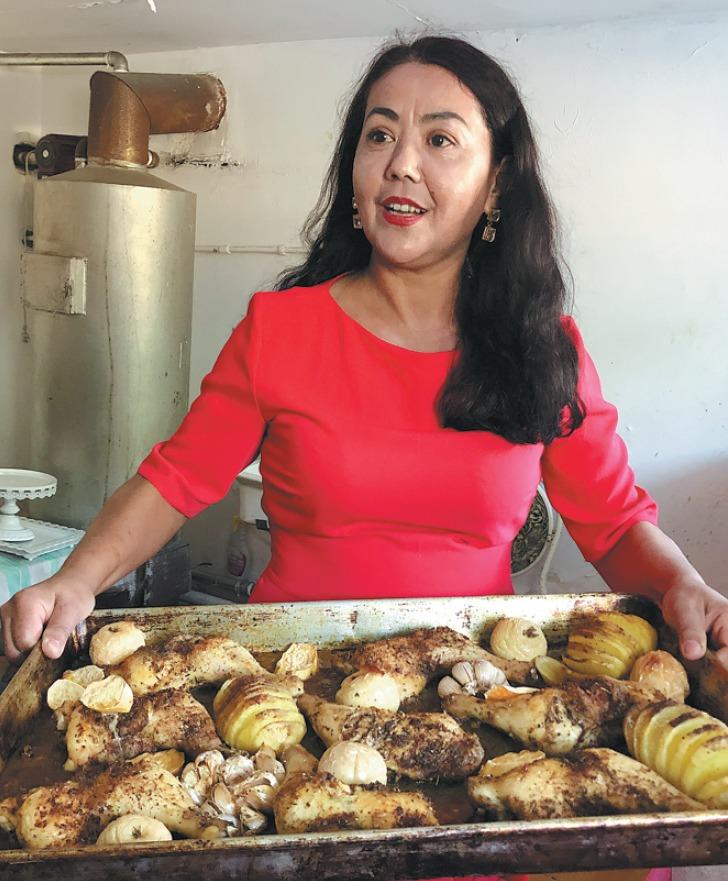 Khalitan learned how to cook the dishes from her family members. Her husband is Uzbek, her younger sister married a Kazak, her elder sister married a Tatar, her son-in-law's father is from the Russian ethnic group, and her "younger brother", who has close bond with the family, is of Han ethnicity. From them, she learned Uzbek stewed lamb with fruits and vegetables, Kazakh horse and lamb meat noodle soup, and Tatar cakes.

"I have a bigger house than others, so on festivals for different ethnic groups, such as Spring Festival and Corban, family members gather together at my place. I prepare snacks and dishes of five ethnicities. I can't miss any ethnicity, otherwise people won't be happy," she says, laughing.

On the walls of the entrance to her house hang the photos of her two daughters. One is 27 years old and the other is 20. Both started learning to play the violin at a young age and were admitted to the China Conservatory of Music. The mother is very proud of her daughters.

"I was a dancer before. But to give my daughters a better violin education, I quit at age 35 and went to Beijing to look after them while they were preparing for the admission examination of the middle school affiliated to the China Conservatory of Music. We lived in a basement apartment and had simple meals. My daughters practiced eight hours a day to catch up with other students. We overcame a lot of difficulty and both of them entered the conservatory," she says.

In a room of the yard, old photos and objects are carefully arranged: a small radio set, a water bottle that Khalitan's father used while herding sheep, an old accordion, a 150-year-old phonograph and an old dombra (a long-necked lute with two strings).

"When I was little, there was no TV.So my father would play the dombra in the evening and I would dance. That's how I became a dancer later," she says. 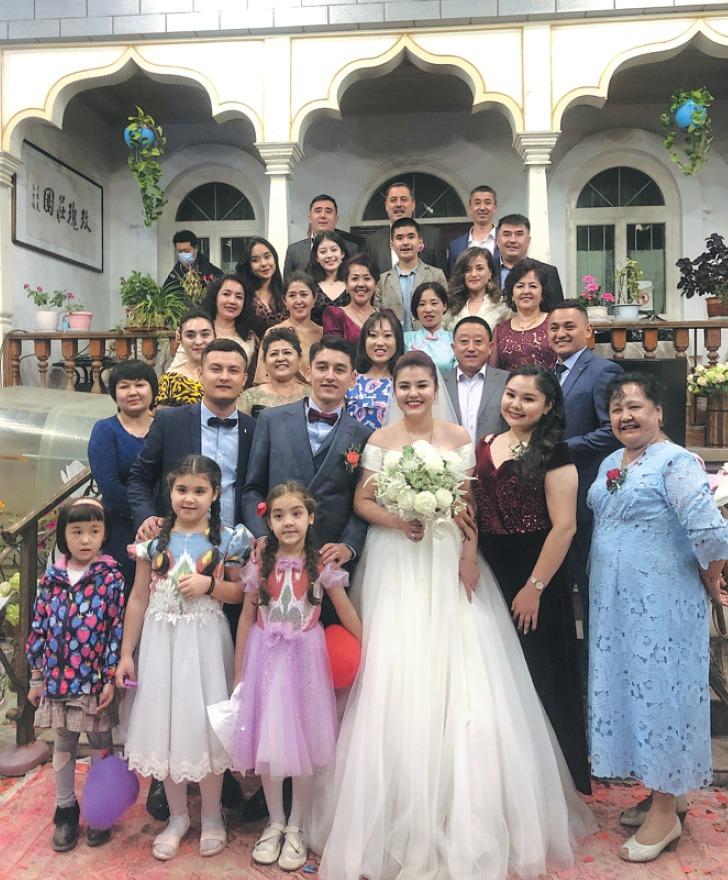 Among the photos, she points to a man of Han ethnicity, and says: "He is my younger brother. It was in 1986 when he came to Tacheng at the age of 13 from Shandong province. My father was herding sheep in the Gobi Desert and saw him. My father asked him,'At your age, you should be in school. Why are you here?' The boy said he had come to work, but it was already October and cold, and he had no place to stay. So my father brought him home with the approval of other family members."

Six years later, the young man, Du Ronglu, received his parents' letter and decided to return to Shandong. Despite his unwillingness, Khalitan's father sewed into his cotton-padded clothes 17,000 yuan (US$2,520), a huge sum then, which the father had earned by selling sheep leather.

Du did not return until 2017. "He appeared at our door suddenly and we were happy to see him," she says.

The two families often visit each other on holidays and special occasions like Khalitan's elder daughter's wedding on Sept 15.

On a wall of Rose Manor hangs another photo of Khalitan's ethnic Han friends. "They are my daughters' ganba and ganma (similar to godfather and godmother). I love them."

In 2004, Khalitan took her elder daughter to a national violin competition in Beijing. There were 16 children from Xinjiang in the competition and her daughter got the first prize. They met a couple from Northwest China's Shaanxi province, whose son was a contestant, too.

"When the father, Liu Haozhong, saw us, he came over and introduced himself, saying that he grew up and worked in Xinjiang. He called me later to say that we should not waste my daughter's talent and he offered to help if we went to Beijing. So I listened to him and quit dancing immediately and took my two daughters to Beijing," she says.

"It was my first time going to Beijing and I knew nobody. They helped us to rent a basement and found teachers for us. We became great friends," she says. "The more ethnic groups there are, the more friends you can have, and the more you can gain, because a lot of great things happen."