Buzzing with intelligence in the sky

Multifunction drones are making a big impact on business, notably in science and agriculture. The global demand for drones is growing with the Chinese mainland leading the pack in the production of unmanned aerial vehicles. Chai Hua reports from Shenzhen. 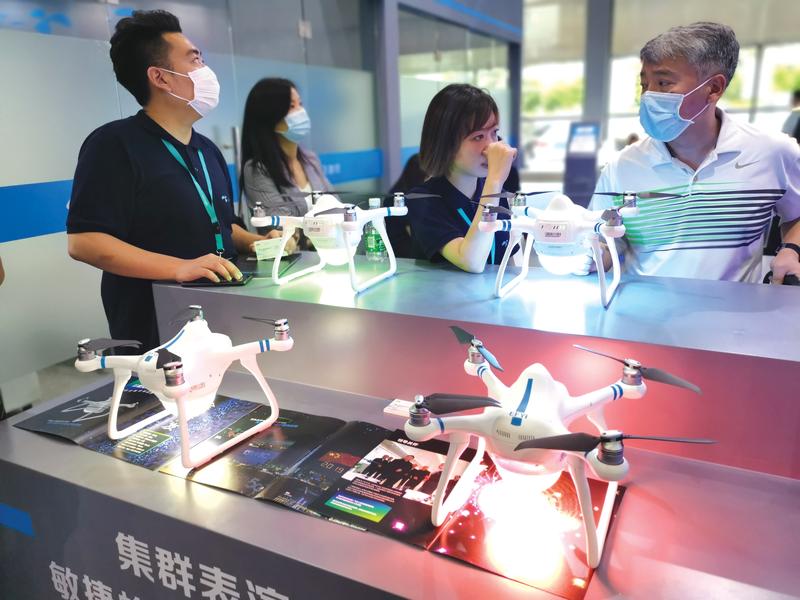 Spraying disinfectants, making non-contact product deliveries, aerial patrols and broadcasts — a vast array of innovative drone solutions have come as a boon for the commercial, scientific, recreational, agricultural and even military fields, expedited by the coronavirus pandemic.

It’s a drone’s world that holds huge development potential for the future, notably for the Chinese mainland — the biggest market for and producer of unmanned aerial vehicles.

Whether it’s several hundred or 1,000 drones, we only need one person to operate the system

The new trends were manifested at last month’s Fourth Drone World Congress in Shenzhen, themed “Future of Intelligence”, at which some 400 companies from around the world showcased more than 1,000 UAVs.

Companies in the Guangdong-Hong Kong-Macao Greater Bay Area, in particular, are playing a leading role as they account for up to 70 percent of the global drone market in 2020 and about one-quarter of the total number of drone manufacturers in China, according to data from the annual event.

The industry still draws growing attention despite the public health crisis, said Yang Jincai, director of the Shenzhen Unmanned Aerial Vehicle Industry Association. The number of visitors to this year’s Shenzhen congress surged by 20 percent year-on-year, while the number of large drones on display rose by about 25 percent compared with last year’s event.

Companies from a wide range of industries, such as petroleum, electricity and emergency rescue firms, said they intend to procure large drones at the Shenzhen fair, according to Yang.

Autoflight Aviation Technology Co unveiled its latest large-size cargo drone V400 Albatross, which is expected to make its maiden flight by the end of this year.

The V400 Albatross has a maximum takeoff weight of 400 kilograms and a payload of 100 kg. Its flight range varies from 300 kilometers to 1,000 km with a pure or hybrid-electric power system.

Autoflight Aviation is also planning the maiden flight of another new drone with a maximum takeoff weight of 1,000 kg this year as well.

Jiang Jun, senior strategic vice-president of Autoflight, told China Daily many clients have made inquiries about cooperation following the debut of V400 Albatross. “They asked us to provide solutions to deliver medicine to mountainous areas, metal products in mining zones, as well as heavy equipment transportation for communication infrastructure construction projects,” he said.

Jiang explained that large drones are suitable for warehouse-to-warehouse transportation and the cost would be lower than using trucks once they begin large-scale operation, especially on islands and in mountainous areas.

He believes the industry is on the fast track for development as related air traffic control is to be eased this year and the market is more ready to accept large drones. 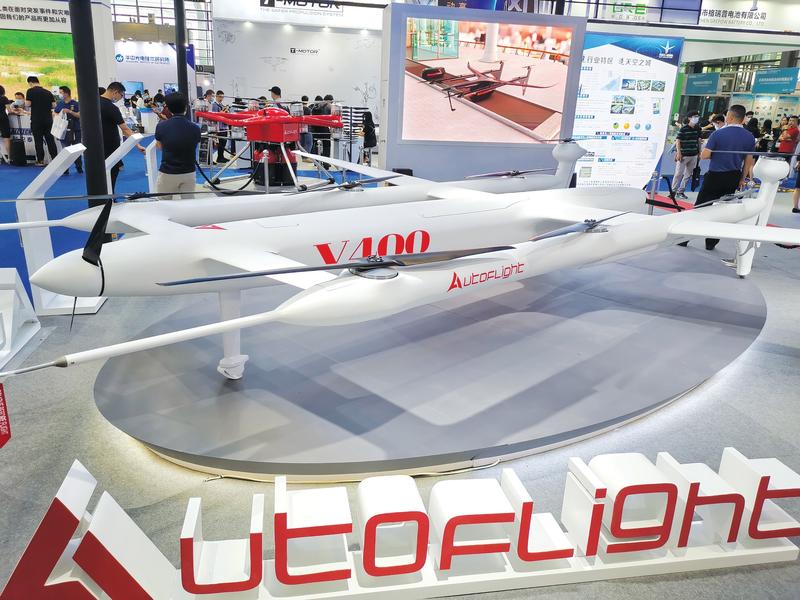 A large cargo drone, the V400 Albatross, on display at the Fourth Drone World Congress in Shenzhen on Sept 13. (CHAI HUA / CHINA DAILY)

Shenzhen-based logistics giant SF Express has made an even “bigger” move by sending a plane-size carrier FH-98 into the sky in August, marking the first application of large drones in China’s logistics business.

The UAV is designed to carry payloads of up to 1.5 metric tons and a maximum volume of 15 cubic meters — one of the largest of its kind in the country.

The FH-98 can fly a distance of up to 1,200 km at a speed of 180 kilometers per hour — long enough for cross-province missions. The pilot flight from the Ningxia Hui autonomous region to the Inner Mongolia autonomous region took about an hour on a route where land transportation is tough due to the complicated landscape of mountains, deserts and wetlands.

The company set up its UAV unit in 2017 and has so far tested small drones for delivery in multiple locations across China. In the fight against the coronavirus, its delivery fleet has made about 3,000 flights and transported more than 11 metric tons of materials.

Yang Daqing, a researcher at the China Society of Logistics, anticipated a wave of large drones to be used in the China market.

Power endurance and dynamic control are constraints in the market’s growth, he said, but recent technology advancement in battery and fifth-generation communication has ensured the safe and long-distance operation of unpiloted aircraft.

Yang pointed out that the shortage of cargo planes and pilots has contributed to the growing demand for large drones. 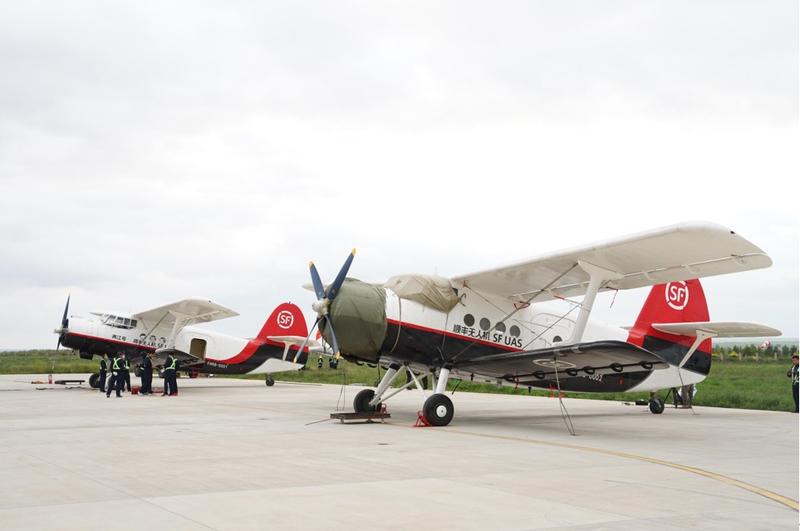 Besides cargo UAVs, the popularity of plant protection drones has also gone up by leaps and bounds this year, driven by a broader range of applications in the agriculture industry.

The company said this has been made possible through more than 57 million flights by some 48,000 drones carrying 450 million liters of pesticides and fertilizers.

Chen Tao, sales director of DJI’s agricultural equipment department, pointed out that drones’ agricultural application is expanding from protecting field crops to other categories, such as rice seeding on paddy land, tea tree protection, as well as fish and shrimp pond feeding.

Amid the pandemic’s detrimental impact, Chen said both the sales volume and working area of DJI’s plant protection drones have more than doubled this year, while overseas and domestic demand is still rising.

The drone could spray pesticides on about 12 hectares of farmland per hour, up 20 percent compared to the previous generation of UAVs.

In the entertainment domain, cluster drone performance in the night sky has been gaining traction in China.

A flying eagle spreading its wings, variable Chinese characters, a ballerina dancing to the music, or even a QR code. Looking up at the swarm of high-tech gadgets, many people may wonder how many drone drivers are behind the splendid show. The answer is surprising — just one, but the technology behind the entertainment form is unexpectedly complicated.

“Whether it’s several hundred or 1,000 drones, we only need one person to operate the system,” Qi Juntong, founder of Tianjin-based drone maker Efy Technology, told China Daily at the Fourth Drone World Congress in Shenzhen.

Many people know how drones operate from aerial photography applications, but Qi said the precision control requirements for cluster performance drones are much higher.

Cluster drones’ positions need to be calculated precisely to the level of centimeters, while photo-shooting drones can survive meter-level position errors, he said.

Qi sees exponential growth of the cluster drone performance market as drone formation shows are gaining popularity at scenic spots, amusement parks and anniversary celebrations in not only first-tier cities but also second- and third-tier towns.

“A dozen shows were booked during the National Day ‘golden week’, and it was so busy we had to transport our drones from one venue directly to another,” he said.

In addition, the technological advancement of 5G has substantially reduced the risks of traffic congestion, poor network stability and real-time control failure for long-distance projects, and expedited the wide application of drone cluster performance, Qi said.