S'pore to monitor workers at dorms with contact-trace tokens 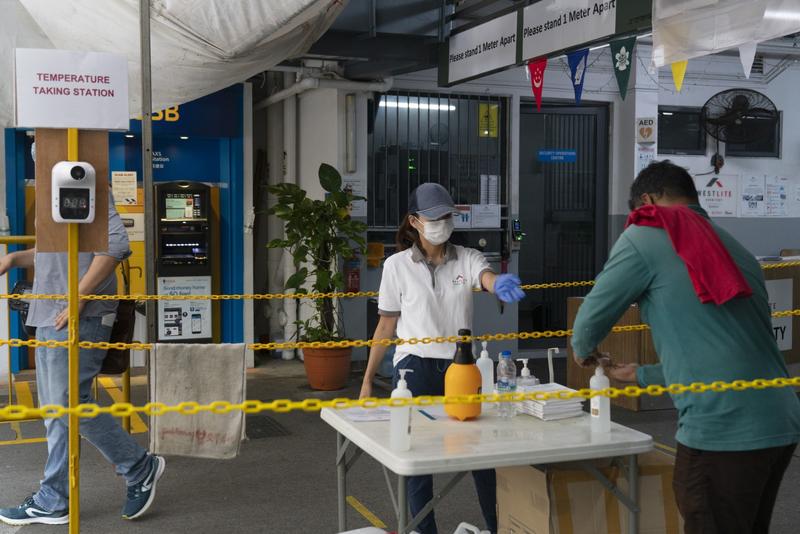 A worker uses hand sanitizer at the entrance to the Westlite Mandai worker dormitory in Singapore, on Aug 31, 2020.  (PHOTO / BLOOMBERG)

The country has rolled out the tokens to complement the tracing phone app to reach the maximum number of residents. With a goal of eventually reaching 100% of the population, Singapore’s tracing program is among the most ambitious in the world. Efforts by many countries to use mobile apps to fight the virus have mostly stalled or have been abandoned amid dismal take-up rates and privacy concerns.

Workers in the dorms, many of them immigrants from India, Bangladash and Malaysia, have accounted for the vast majority of the almost 58,000 cases in the city state.

Stallholders, stall assistants and cleaners working at 110 hawker centers and markets and more than 1,120 coffee shops, as well as food delivery personnel operating in the locality of these eating places can go for the voluntary testing due to their higher frequency of interactions with the public, said a joint news release on Thursday.

The testing operations will be progressively rolled out to different regions of Singapore before the end of the year.

As of Thursday, Singapore reported three new COVID-19 cases, with two imported cases and one case involving a patient residing in the dormitory who was detected through routine testing. The number of the city state's total cases has risen to 57,892. 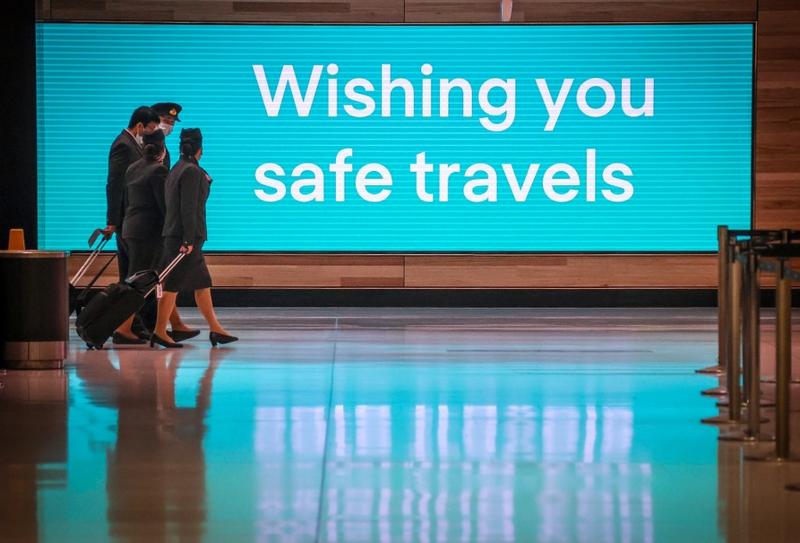 This Sept 29, 2020, photo shows Qatar Airlines flight crew members wearing face masks as a preventive measure against the COVID-19 novel coronavirus as they walk past an illuminated sign in the Sydney International Airport in Sydney. (DAVID GRAY / AFP)

All returned travelers have to undertake quarantine in hotels for 14 days. An additional 5,000 quarantine places will be available over the next six months under an agreement with the Northern Territory government to open up a facility near Darwin.

Meanwhile, several hundred passengers from the New Zealand city of Auckland are due to land in Sydney on Friday as part of a new trans-Tasman travel bubble amid a rapidly falling growth rate in cases at the epicentre of Australia’s coronavirus outbreak.

In the state of New South Wales, where three New Zealand flights will be landing on Friday, community transmission has crept up in recent days to double-digits, although the case load is modest compared to outbreaks in much of Europe and North America.

Travellers on the flights won't be required to quarantine in Sydney, Air New Zealand said, although the arrangements are not yet reciprocal, with New Zealand requiring arrivals to be in managed isolation for 14 days.

Bangladesh reported 1,527 new COVID-19 cases and 15 new deaths on Friday, bringing the total cases in the country to 386,086 and the total deaths to 5,623, the Directorate General of Health Services (DGHS) said.

The official data showed the total number of recovered patients in the country stood at 300,738 including 1509 new recoveries on Friday. 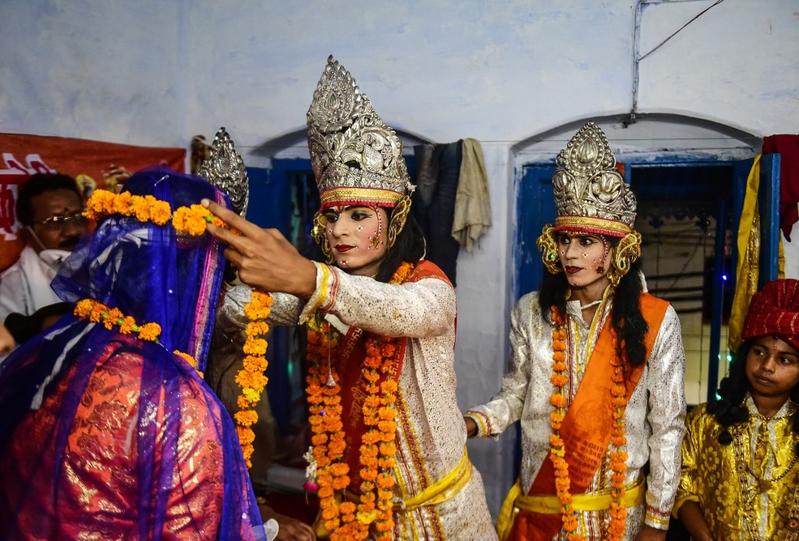 An artist dressed as Hindu God Rama (center) performs along with other artists during a traditional Ram Leela drama which narrates the life of Rama, in Allahabad on Oct 15, 2020. (SANJAY KANOJIA / AFP)

India reported 63,371 additional coronavirus cases on Friday, continuing an easing trend that has seen infections drop below 70,000 for five straight days. India, which now has a total of 7.37 million cases, has been on track to surpass the US as the world’s worst-hit nation. But COVID-19 is resurging in the US, with daily cases there climbing to match India’s while total US infections are approaching 8 million.

Indian government's focus has been on ramping up COVID-19 testing facilities across the length and breadth of the country. Till Thursday a total of 92,254,927 COVID-19 tests had been conducted, out of which 1,028,622 tests were conducted on Thursday alone, revealed the data from the Indian Council of Medical Research (ICMR).

Iran recorded 4,552 new coronavirus and 265 new deaths in the past 24 hours, down about 5% from record numbers seen earlier in the week. The health ministry said a total of 522,387 infections and 29,870 fatalities have been reported so far, as the country has seen and increase in virus numbers, including several new records, in the past two weeks. 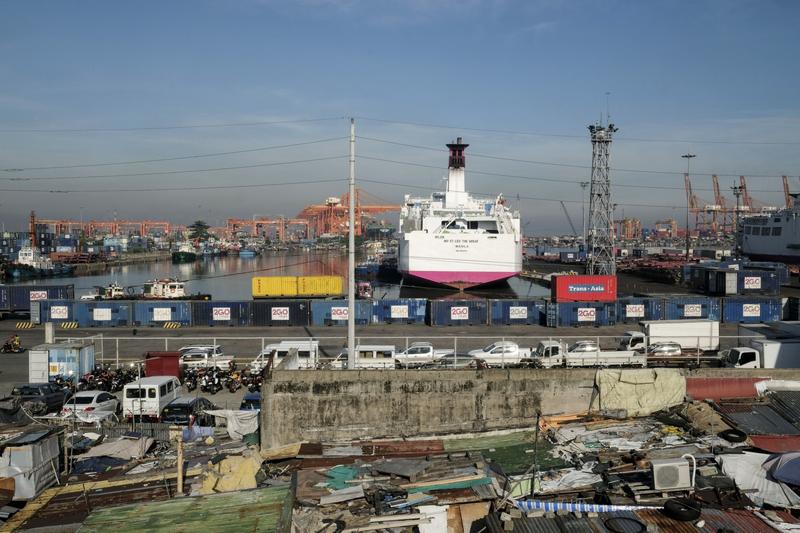 In this July 21, 2020 photo, passenger and cargo ships are docked at the North Port in Manila, the Philippines. (PHOTO / BLOOMBERG

The ministry also reported 65 more deaths and 3,356 new recovered cases, raising the death toll from the infectious virus to 10,086 and the total recoveries to 350,752 in the country.

A total of 2,568,776 tests have been carried out across the country since the outbreak of the disease in February, with 20,023 done during the day, according to the statement.

Israel's special cabinet for handling the COVID-19 decided on Thursday to partially lift a month-long lockdown on Sunday, by easing some of the restrictions.

The first phase of the exit plan will begin on Sunday amidst declining numbers of new infections, the Prime Minister's Office and the Health Ministry said in a joint statement.

Under the cabinet decision, the restriction limiting residents to a 1,000-meter radius of their homes will be lifted.

Kindergartens and businesses that do not attend clients will be reopened, but schools and other businesses would still be closed. Restaurants would be allowed to take only take-away orders.

Gatherings of more than 20 will still be prohibited and local lockdowns in "red" cities with high morbidity rates might be imposed, the government said.

Israel's tally of COVID-19 cases crossed the 300,000 mark on Thursday, despite a recent decline in the daily count of new infections.

Israel recorded 1,701 new COVID-19 infections on Thursday, pushing the tally of COVID-19 cases to 300,201, marking a third consecutive day of decrease in the number of new cases, the Israeli Health Ministry said.

The decline came after 1,848 new cases were reported on Wednesday and 2,621 new cases on Tuesday.

Japan's coronavirus infections are leveling off and a dramatic change in new patient numbers is not expected, domestic media reports cited Shigeru Omi, head of the government’s virus advisory panel, as saying Thursday.

People’s behavior is still shifting as many want to get back to normal life, but are also increasingly aware of situations where infection risk is high, he said. The island nation has recorded less than 1,000 infections per day for over a month. Cluster infection events still pose a risk, Omi warned.

Laos' National Taskforce Committee for COVID-19 Prevention and Control on Friday said it has been monitoring 2,621 people across the country over COVID-19 concerns.

Deputy Director General of the Department of Communicable Disease Control under the Lao Ministry of Health Latsamy Vongkhamsao, told a press conference in Lao capital Vientiane on Friday that some 1,870 people entering Laos through international border checkpoints on Thursday and the temperature of each person was checked before sending to quarantine center for 14 days.

A total of 2,621 people has been quarantined at 35 accommodation centers across the country, said Latsamy.

As of Friday, Laos has tested 59,448 suspected cases with 23 cases tested positive, and 22 patients have recovered.

Lebanon registered on Thursday the highest daily increase in the number of COVID-19 cases by 1,550 to 58,745, while the death toll went up by 2 to 501, the Health Ministry reported.

Mohamad Haidar, advisor to the health minister, said Thursday that public and private hospitals are adding beds to their emergency units to receive more COVID-19 patients amid a continuous increase in the number of infections.

There is one suspected historical case currently being investigated, which is not included in Friday's reporting numbers, according to the Ministry of Health.

The first imported case arrived from the Philippines via Hong Kong on Oct 3 and was taken to a managed isolation facility in Auckland. This person tested positive as part of routine day 12 testing and has been transferred to the Auckland quarantine facility, said a ministry statement.

The second imported case arrived from Peru via Mexico and the United States on Oct 10 and was taken to a managed isolation facility in Christchurch. This person tested positive as part of routine day 3 testing, the statement said.

The third and fourth imported cases both arrived from Hong Kong on Oct 11 and were taken to a managed isolation facility in Auckland. They tested positive as part of routine day 3 testing and have been transferred to the Auckland quarantine facility, it said.

The country's total number of confirmed cases of COVID-19 is 1,524, which is the number reported to the World Health Organization.

New Zealand's total number of active cases is 46, all imported cases. There are no active community cases of COVID-19, it said. 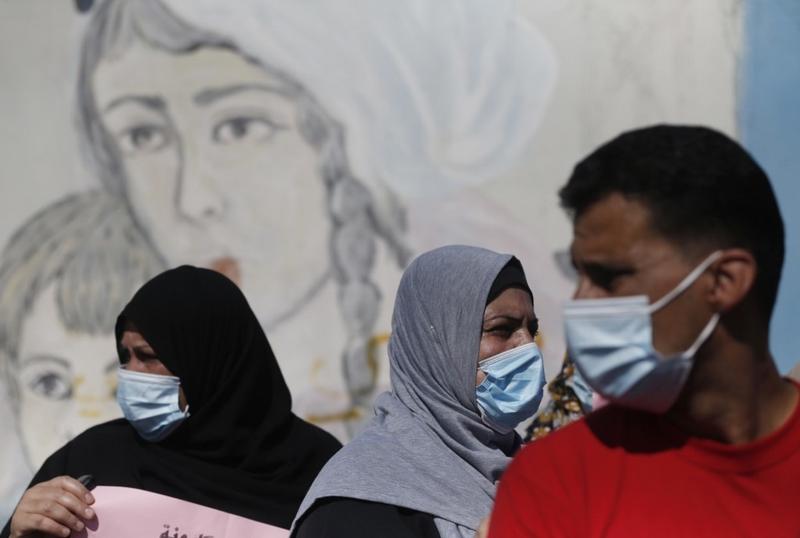 Palestinians wearing a protective masks amid the COVID-19 pandemic attend a rally to protest the reduction of the food basket provided by the United Nations Relief and Works Agency for Palestine Refugees in the Near East (UNRWA) in Gaza City, on Oct 14, 2020. (MOHAMMED ABED / AFP)

Palestine on Thursday recorded 442 new cases infected with the novel coronavirus, bringing the total number of infections in the Palestinian territories to 57,441.

Palestinian Health Minister Mai al-Kaila said in a press statement that 350 cases were reported in the West Bank, 11 in East Jerusalem and 81 in the Gaza Strip.

Meanwhile, the Palestinian health ministry recorded eight fatalities from the COVID-19, raising the total number of deaths to 471, the minister noted.

Palestine currently has 6,755 active cases, including 4,366 cases in the Gaza Strip, according to the minister 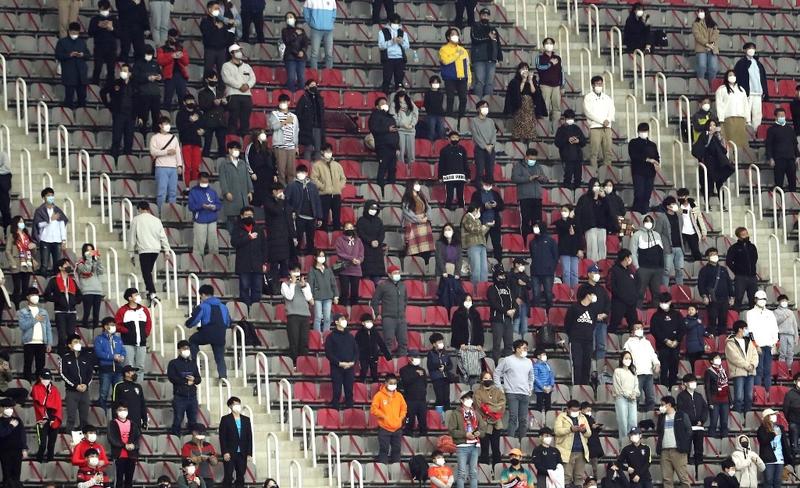 This Oct 12, 2020, photo shows spectators singing the national anthem during a friendly football match between the South Korean national team and the under-23 national team at a stadium in Goyang. (YONHAP / AFP)

Sri Lanka's Health Minister, Pavithra Wanniarachchi has signed a special gazette notification on the implementation of COVID-19 precautions, including wearing face masks, maintaining social distance and hand hygiene as the country has been facing a rise in new COVID-19 cases in recent weeks.

South Korea reported 47 new coronavirus cases in 24 hours, down from 99 a day earlier, according to data from the Korea Disease Control and Prevention Agency. The total number of confirmed cases there rose to 25,035.

The United Arab Emirates (UAE) on Thursday announced 1,398 new COVID-19 cases, raising the total confirmed number in the country to 111,437.

At the same time, 1,666 more patients recovered from the virus, taking the tally of recoveries in the UAE to 103,325, the Ministry of Health and Prevention said.

It also confirmed two more deaths, pushing up the country's death toll to 452. 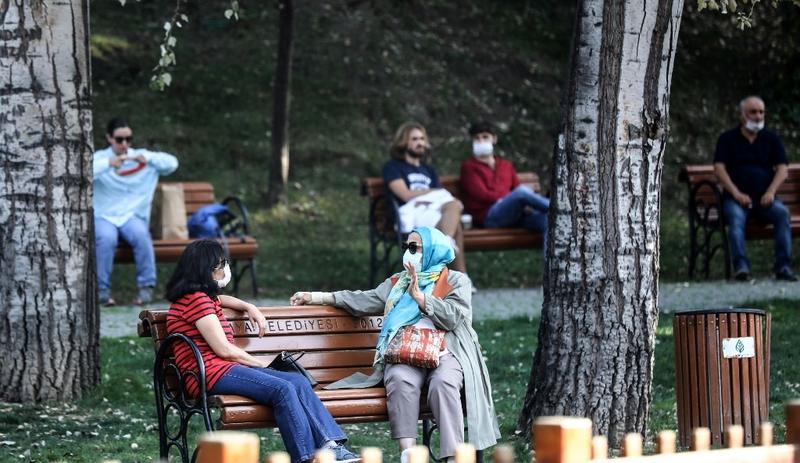 People wearing protective face masks against the spread of the novel corona virus, COVID-19, sit on benches in the Kugulu Park in Ankara on Oct 12, 2020. (ADEM ALTAN / AFP)

The Philippines is investigating COVID-19 outbreaks on ships that changed crews in Manila in a bid to avoid a ban on Filipino seafarers.

Stricter protocols in crew-change hubs may be put in place, depending on the probe’s results, Transportation Assistant Secretary Narciso Vingson Jr said in a statement Friday.

The investigation comes after infections were recorded among crew of Australia-bound bulk carriers Vega Dream and the Patricia Oldendorff, raising possibility of a ban on seafarers from the Philippines, which supplies a quarter of the world’s merchant marine workforce.

Vingson said the infections may have occurred before the government standardized testing in a new facility it opened in Manila’s port last month for arriving and departing Filipino seafarers. Prior, manning agencies were “operating on their own and may be lacking in monitoring,” he said.

The Western Australia Today reported on Oct 12 that Australian mining companies won’t use any seafarers from Manila, the epicenter of the Philippine outbreak. The Southeast Asian nation’s maritime agency has not received official notice of this move, said Luisito delos Santos, who heads its information service.

Vessels have been diverting to the Philippines to facilitate crew changes after the pandemic shut borders and limited flights.

The Philippines reported 3,139 new daily cases of the COVID-19 on Friday, pushing the total number of the confirmed cases in the Southeast Asian country to 351,750.

Meanwhile, 66 people died in the past 24 hours, taking the death toll to 9,080, the Turkish Health Ministry announced.