Farmers take road out of poverty in Fujian village

By Mo Jingxi and Hu Meidong

Editor's note: As China is set to complete the building of a moderately prosperous society in all respects at the end of this year, President Xi Jinping has noted that there are areas of weakness in realizing this goal. China Daily is publishing a series of stories to look at the country's efforts to tackle these weaknesses with targeted measures. 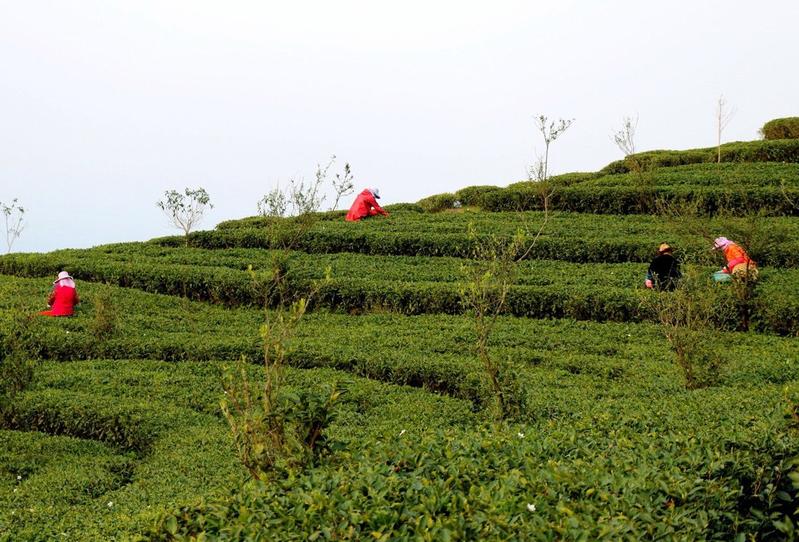 Wang Guangchao, 72, and his wife, Wu Shouju, 65, are considering selling their tea leaves using livestreaming as they see more and more people doing.

The couple opened a teahouse in their home in Xiadang, a village in the mountainous area of Shouning county in Fujian province, in 2016.

Every day, dozens of tourists from across the country visit their teahouse and listen to them talk about the village's dramatic changes over the years.

In the 1980s, the village lacked roads, running water and electricity. At the time, 36 percent of its residents lived below the poverty line with an annual per capita net income of less than 200 yuan (US$29.70).

Xiadang is one of the more than 120,000 villages in China lifted out of poverty in the nation's drive to finish building a moderately prosperous society in all respects by the end of 2020, ahead of the 100th anniversary of the Communist Party of China next year

In order to sell farm produce and purchase necessary items for their daily life, the villagers had to walk for more than 10 kilometers to nearby towns.

When the couple's two sons went to middle school in a town, all they could do was provide them with the most basic foodstuffs and 1 yuan in weekly spending money for each boy.

"In summer, the food we made for them, such as soybeans mixed with pickled Chinese cabbage, would go rotten very quickly, and then all they had left to eat was rice in boiled water," Wang said.

In 1989, the first highway was built linking their village with the outside world.

By 2019, thanks to the development of tea gardens and revolutionary-themed tourism in recent years, villagers in Xiadang had shaken off poverty and now have an annual per capita net income of 14,800 yuan.

Xiadang is one of the more than 120,000 villages in China lifted out of poverty in the nation's drive to finish building a moderately prosperous society in all respects by the end of 2020, ahead of the 100th anniversary of the Communist Party of China next year.

In an article published in June in the Qiushi Journal, the flagship magazine of the CPC Central Committee, President Xi Jinping noted that there are still some areas of weakness that need to be strengthened with prompt efforts in order to realize this goal, calling for targeted measures to tackle these weak links.

Xi, who is also general secretary of the CPC Central Committee, said that eradicating poverty is one of the main tasks to fix these weak links, emphasizing that the focus should be on areas of extreme poverty.

He urged prioritizing efforts to ensure safe housing, compulsory education and basic medical care for the rural poor, adding that effective measures should be taken to guard against a return to poverty.

Poverty relief work is always high on President Xi Jinping's agenda, and he has spent time visiting impoverished regions during almost every one of his 30-plus inspection tours nationwide

Now the elderly couple's small teahouse in Xiadang earns them an annual income of around 30,000 yuan.

"We really appreciate General Secretary Xi for helping to build our village's first road. Otherwise, there would have been no way forward for our lives at the time. With our agricultural produce being sold in other areas, we started the very first step of walking out of poverty," said Wang, whose house is near the village's first road.

In 1989, when Xi was Party secretary of Ningde prefecture in Fujian, he made his first visit to Xiadang after taking a three-hour ride by car and walking on mountain roads for more than two hours. The trip was aimed at helping to solve problems that hindered the village's development. After his visit, the local government allocated 720,000 yuan for Xiadang to build a road and a power station.

He made two more visits to Xiadang－when the village was hit by flooding in 1989 and during an inspection tour in 1996 as deputy Party chief of Fujian.

In Xi's view, if areas of rural China－particularly impoverished areas－are left behind, a moderately prosperous society will not emerge. Poverty relief work is always high on his agenda, and he has spent time visiting impoverished regions during almost every one of his 30-plus inspection tours nationwide.

During a trip to Fuping county, an impoverished region in Hebei province, after becoming general secretary of the CPC Central Committee in 2012, Xi stressed that the most arduous task facing China in completing the building of a moderately prosperous society was in rural areas, especially in poverty-stricken regions.

Emphasizing that common prosperity is the fundamental principle of socialism with Chinese characteristics, he called on local Party and government organs to fulfill their responsibilities well in order to quickly bring villagers out of poverty.

READ MORE: 2020 to have 'milestone significance'

Once China lifts all its rural poor above the poverty line this year, it will meet the United Nations 2030 Agenda for Sustainable Development's goals and targets for poverty reduction 10 years ahead of schedule.

Despite the effects of the COVID-19 pandemic this year, Xi said in March that the task of lifting all rural residents out of poverty this year must be fulfilled on time as it is a solemn promise made by the CPC Central Committee.

He made the remark at a symposium on securing a decisive victory in poverty alleviation.

The main task of the symposium was to mobilize all resources to win the battle against poverty, and ensure that the target of eradicating poverty was met as planned in order to build a moderately prosperous society in all respects.

According to Ou Qingping, deputy head of the State Council Leading Group Office of Poverty Alleviation and Development, the country's top anti-poverty body will focus this year on supervising poverty alleviation work in the remaining 52 counties labeled as "impoverished". That will ensure that all registered poverty-stricken households there are lifted out of poverty on time.

In these counties, about 1.2 million impoverished people have been relocated to more habitable locations and another 870,000 people who are at risk of returning to poverty have been offered targeted assistance, Ou said at a news conference in August.

The top priority will then be solving the issues that hinder the sales of agricultural produce, further promote poverty alleviation through consumption and improve the monitoring and assistance mechanism to prevent a return to poverty, he said.

Jhala Nath Khanal, former prime minister of Nepal and leader of the Communist Party of Nepal, said in an article published in People's Daily that China's near completion of eradicating extreme poverty benefited from the CPC's leadership and its philosophy of putting people first.

Khanal, who has made multiple visits to China since the 1990s, said that Xi spent a large amount of energy and efforts in China's poverty relief work, which have helped improve the living standards of China's impoverished people and are quite admirable.