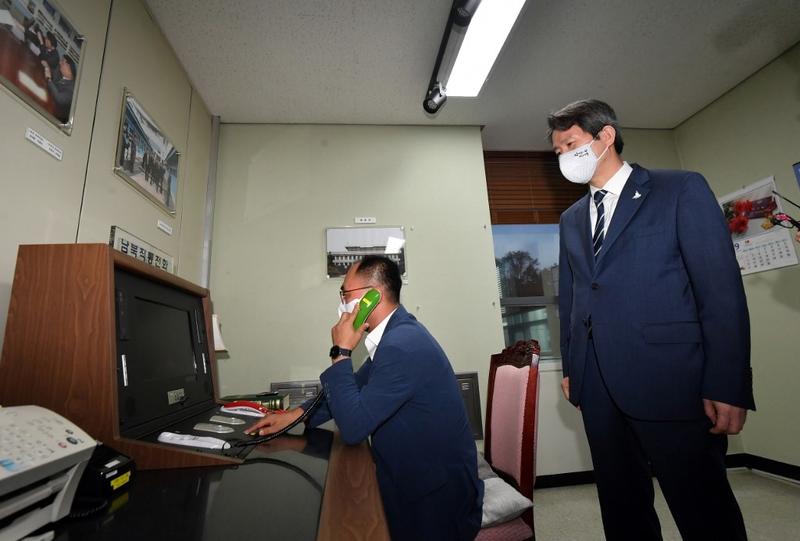 South Korean Unification Minister Lee In-young (right) looks at the inter-Korean hotline during a visit to the south side of the truce village of Panmunjom in the Demilitarized Zone (DMZ) dividing the two Koreas on September 16, 2020. （PARK TAE-HYUN / AFP / KOREA POOL）

The visit by Lee came ahead of the second anniversary of a summit, held between ROK President Moon Jae-in and top DPRK leader Kim Jong-un in Pyongyang on Sept 19, 2018

"I hope that consultation channels, including the South-North joint liaison office, can be restored as early as possible and (ROK and the DPRK) can resume frank and candid dialogue," Lee said during his first visit to the border village of Panmunjom since he took office in July.

The visit by Lee came ahead of the second anniversary of a summit, held between ROK President Moon Jae-in and top DPRK leader Kim Jong-un in Pyongyang on Sept 19, 2018.

"The promise should be fulfilled and the agreements can be completed through implementation," Lee said.

To restart the "time of the South and the North," the minister said the ROK government will begin with "a small approach" to the humanitarian and the exchange and cooperation areas which Seoul and Pyongyang can do immediately.

By doing it, ROK will turn it into the time of faith and trust, Lee noted.

Moon and Kim held three summits in 2018, agreeing to completely denuclearize the Korean Peninsula, permanently achieve peace on the peninsula, stop all hostile acts near the inter-Korean border and increase exchange and cooperation.

All inter-Korean hotlines were restored, and a joint liaison office was set up in the DPRK's border town of Kaesong in 2018 for the round-the-clock communication.

However, the inter-Korean ties have been stalled since the second summit between Kim and US President Donald Trump ended without agreement in February 2019 at the Vietnamese capital of Hanoi.

The DPRK severed all inter-Korean communication channels and destroyed the joint liaison office this year in protest against anti-DPRK leaflets across the border released by ROK civic groups.