By Earle Gale in London 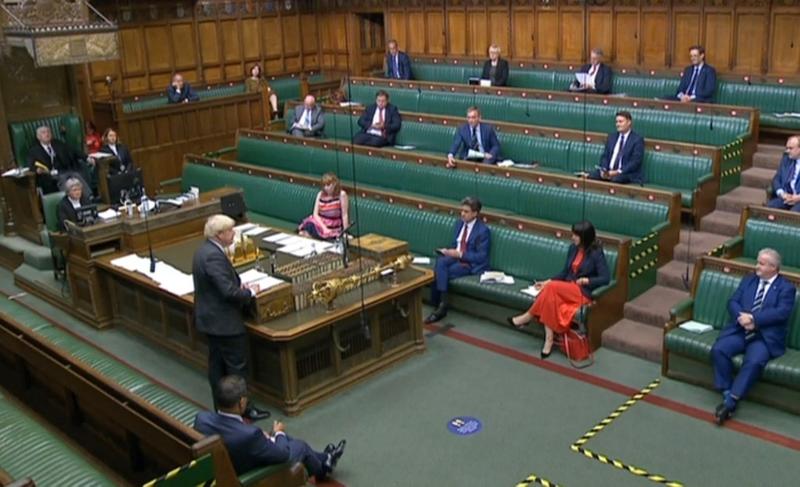 A video grab from footage broadcast by the UK Parliament's Parliamentary Recording Unit (PRU) shows Britain's Prime Minister Boris Johnson speaking as he opens the debate into the Government's proposed Internal Markets Bill, in the House of Commons in London on Sept 14, 2020. (PHOTO / PRU / AFP)

Several British politicians, including lawmakers from Prime Minister Boris Johnson's ruling Conservative Party, have said a proposed bill that would give the government the power to break international law risks seriously damaging the nation's reputation.

The bill, which allows the govt to override parts of the Brexit withdrawal agreement that the UK reached with the EU last year, has been criticized by five ex-prime ministers

The warnings were made before, during, and after a five-hour debate in the House of Commons on Monday night that the government won by 340 votes to 263, a comfortable margin that belies the controversy surrounding the Internal Market Bill.

House of Commons committees will now debate the proposed legislation in detail before it returns to the main chamber for another vote.

The bill, which allows the government to override parts of the Brexit withdrawal agreement that the United Kingdom reached with the European Union last year, has been criticized by five former prime ministers.

The fact that the Conservative Party has 364 lawmakers in the 650-seat Parliament meant the government was never in danger of losing the vote but, with two Conservative MPs voting against the bill and around 30 abstaining, the episode will have embarrassed the government.

Roger Gale, one of those who voted against the bill, said it would diminish the nation's standing.

"I think that this is damaging our international reputation for honest and straight dealing at a time when we are about to embark on a series of trade negotiations," he said on the BBC's Newsnight program. "I took a view that you fight this tooth and nail at every step."

He predicted other Conservative Party MPs will join the revolt at the next stage.

Fellow Conservative MP Andrew Mitchell said it would cause "incalculable damage to our reputation all around the world".

And the BBC reported that Sajid Javid, a former chancellor of the exchequer, said he will vote against it at the next stage, if it is not improved.

William Hague, a former leader of the Conservative Party, wrote in the Daily Telegraph newspaper it amounts to "a serious foreign policy error" that would have "a lasting and damaging effect on our international reputation and standing, diminishing our ability to exert our influence and protect our interests".

But the government said the bill is needed to ensure the free flow of goods and services between England, Northern Ireland, Scotland, and Wales after the UK stops following EU rules at the end of the year.

And it insisted it will only be needed if the UK and the EU fail to agree a free-trade deal.

Johnson vowed he has "absolutely no desire" to use its powers.

"It's a protection, it's a safety net, it's an insurance policy, and it's a very sensible measure," he told MPs.

Home Secretary Priti Patel, who supported the bill, said on Radio 4's Today program that the government continues to work hard to "settle on our future relationship" with the EU and ensure the bill is not needed.

Sky News said that, if the bill clears the House of Commons as expected, it will be debated in the House of Lords, where it is likely to face even more opposition.