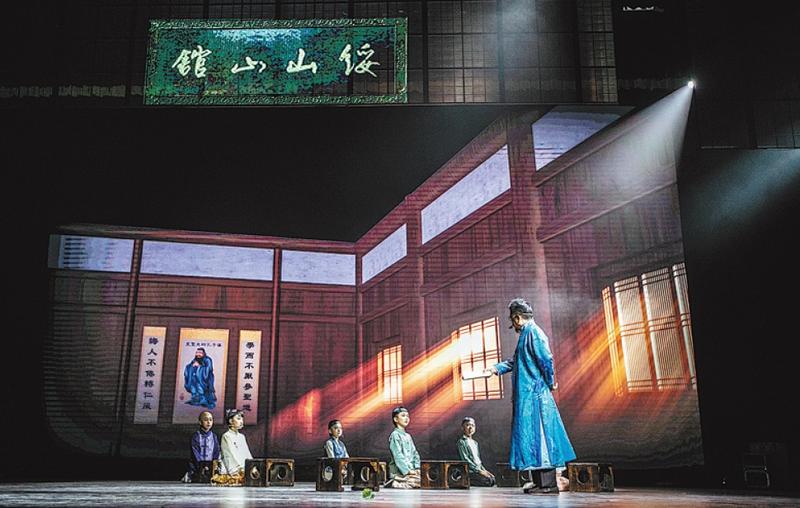 Musical Shaonian Guo Moruo, based on Guo's early life, premieres in Shawan town, Sichuan province, on Sept 18 and will run until Oct 2 before embarking on a national tour. (PHOTO PROVIDED TO CHINA DAILY)

When musician Shen Qing studied at Leshan No 1 High School in Southwest China's Sichuan province in the mid-1980s, he heard stories about Guo Moruo (1892-1978), a celebrity alumnus of the school, whose statue stands at its entrance.

Born in Shawan, a small town of Leshan city, with the name Guo Kaizhen, he became a commanding figure in the Chinese intellectual history, making enormous contributions to literature, archaeology, art and translation, among other areas.

A major part of the musical features his hard work and devotion to knowledge, which are important and related to today’s younger generation

The school, with its name written in Guo's calligraphy, has now set up an exhibition hall to recount the great man's life story and showcase his achievements.

"He was everywhere in the school and I read his legendary stories as a teenager. Because we share the same hometown, I naturally felt close to him," recalls Shen, 50, who moved to Beijing and launched a full-time career as a singer-songwriter in 1990.

Last year, Shen was approached by the local government of Leshan to write a musical based on Guo's early life in Shawan before 1905, when he left his small town to pursue further education at the age of 12.

The two-hour, four-act musical, titled Shaonian Guo Moruo, or Youngster Guo Moruo, will be premiered at Shawan, Leshan, on Sept 18 and will run until Oct 2 with five performances, before touring nationwide.

The musical aims to inspire the younger generation with Guo's stories and boost tourism of the serene, isolated town, which is located along the Dadu River. Besides Shen, the creative team members also include directors Chen Jun and Wen Pei, both veterans of theatrical productions, and Xu Li from the China National Theater for Children.

After writing pop songs for decades, Shen, who made a name during the early 1990s with his catchy, soothing ballads, has written eight songs for the musical. He collected local folk songs performed by fishermen and combined the Leshan dialect with Mandarin while writing lyrics. He also wrote the musical's script.

To better understand Guo, he traveled back to his hometown earlier this year and visited memorials and Guo's former residence.

"The most impressive things about Guo's former residence are the family mottoes that are inscribed everywhere, on wood pillars and tablets, which have been passed down for generations of the Guo family," Shen says. "Those mottoes showed that his family honored traditional Chinese virtues, such as hard work, kindness and loyalty. Guo's father used to set up a classroom in the courtyard, a proof that education was highly valued in his family."

Guo's family were Hakka people from Fujian province, who moved to Sichuan during the 17th century. The eighth child of his family, Guo learned classic Chinese literature and ancient cultural tradition from his private tutor, Shen Huanzhang. As a teenager, he was also exposed to modern books and magazines by his eldest brother, Guo Kaiwen. Guo Moruo followed in his brother's footsteps, leaving for Japan to study medicine in 1914, where he began to learn foreign languages and literature. Guo Moruo published his first anthology of poems, The Goddesses, in 1921, laying the foundation for "new-style poetry" in China and achieving immediate success. He co-founded a literary association called "the Creation Society" in Shanghai, which hailed the romantic spirit and promoted modern vernacular literature.

Guo Moruo, fluent in Japanese, German and English, was also a prolific translator, whose translations include the works of German philosophers Friedrich von Schiller and Friedrich Wilhelm Nietzsche, Leo Tolstoy and Ivan Turgenev of Russia, Percy Shelley and H.G.Wells of Britain, and Upton Sinclair of the United States.

"Through his early life in Shawan, I learned that he read lots of books of various kinds. His teacher Shen Huanzhang once asked him: 'How to define a genius?' Guo Moruo answered: 'It's a result of diligence'," recounts Shen Qing.

"A major part of the musical features his hard work and devotion to knowledge, which are important and related to today's younger generation," adds the songwriter.

Aside from personal and academic achievements, Guo Moruo also held many important government positions, such as the roles of first president of the Chinese Academy of Sciences, chairman of the China Federation of Literary and Art Circles, and vice-chairman of the Standing Committee of the National People's Congress and Chinese People's Political Consultative Conference.

"When I read the book about his youth, I was touched by his gratitude to his mother, who had taken good care of the family and accompanied the children as much as possible," says Shen Qing. "It is good advice for parents of today, who, busy with their work, ignore the importance of quality family time. Therefore, we contrived some plot points in the musical to help remind parents to spend more time with their children."

There are nine amateur child actors in the musical performing alongside professional singers.

Li Xiang, a tenor from China National Opera House, plays the role of Guo's father, a businessman, who believed in education and valued traditional Chinese culture.

"He was a strict father and kept the tradition of educating his children through the values espoused by family mottoes. Nowadays, however, it's a pity that family mottoes have been neglected by modern Chinese families," says Li, 38, who graduated from the Central Conservatory of Music in Beijing and joined the China National Opera House in 2005.

The tenor also mentions that during the field trips before the musical's creation, he was attracted by the natural scenery of Shawan and loves the local food as well as making friends with local people, who are "warm, straightforward and sincere".

"We want to portray Guo Moruo's life before he became a celebrity with his encyclopedic knowledge and artistic talent. The local culture of Shawan, the food, and his family members, all contributed to his growth," Li says.