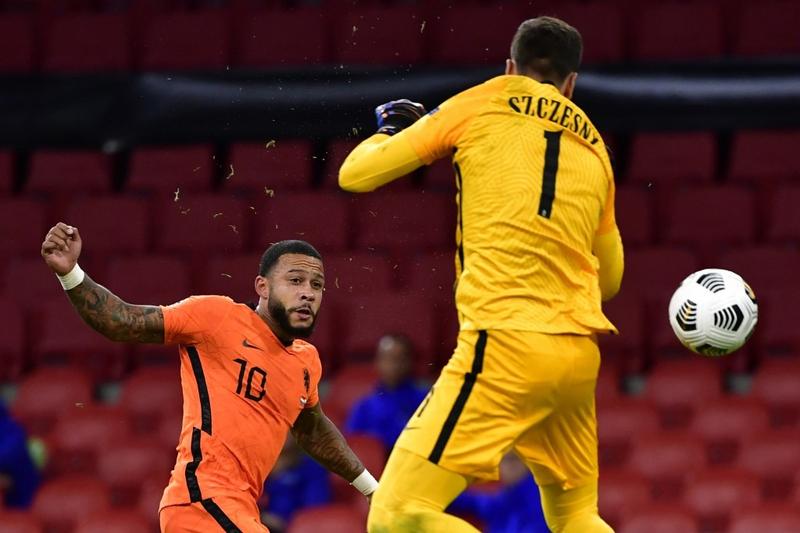 Dutch's forward Memphis Depay (left) fights for the ball during the UEFA Nations League football match between Netherlands and Poland at the Johan Cruijff Arena stadium, in Amsterdam, on Sept 4, 2020. (JOHN THYS / AFP)

Olympique Lyonnais on Tuesday poured cold water on reports that their Dutch international forward Memphis Depay is on the brink of a 30-million euro (US$35.54 million) move to Barcelona.

Memphis Depay is under contract at Lyon until next year, having joined them from Manchester United three years ago

Dutch media reported on Tuesday that the Catalan club, where former Netherlands coach Ronald Koeman recently took over, were on the brink of signing the 26-year-old striker.

Yet Lyon president Jean-Michel Aulas said the Spanish giants had told him Depay was too expensive for them.

“The president of Barça (Josep Maria Bartomeu) told me on Sunday that Barça was suffering a lot from the COVID-19 crisis and have no possibility of making an offer,” Aulas tweeted on Tuesday (@JM_Aulas).

Depay is under contract at Lyon until next year, having joined them from Manchester United three years ago.

He helped the French club to the semi-final of the Champions League last month and scored a hat-trick as Lyon kicked off the new Ligue 1 campaign with a 4-1 home win over Dijon on Aug 28.