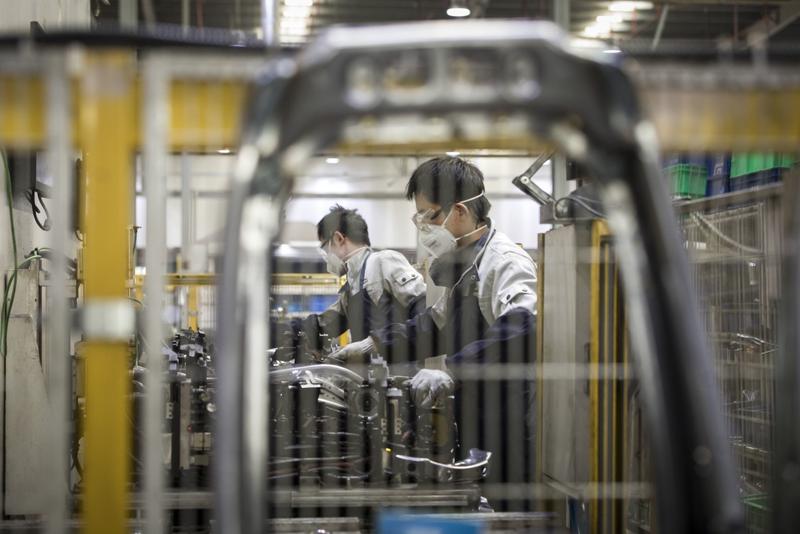 Employees wearing protective face masks work on a production line during at a factory in Shanghai, China, on Monday, Feb 24, 2020. (QILAI SHEN / BLOOMBERG)

China’s largest corporation unveiled Wednesday a factory it’s been operating under wraps for the past three years on the outskirts of its hometown of Hangzhou, churning out apparel for clothing merchants on its Taobao and Tmall marketplaces.

Dubbed Xunxi, the so-called smart or connected factory is designed to showcase Alibaba’s newest line of business, offering data analytics and back-end technology to manufacturers so they can customize and fine-tune factories in response to consumer demand.

Dubbed Xunxi, the so-called smart or connected factory is designed to showcase Alibaba’s newest line of business, offering data analytics and back-end technology to manufacturers so they can customize and fine-tune factories in response to consumer demand

“This allows traditional manufacturers to improve profitability and reduce inventory levels while still being able to meet these personalization needs,” said Alain Wu, chief executive officer of Alibaba-subsidiary Xunxi Digital Technology Co Xunxi’s factory floor is equipped with cutting and sewing machines and conveyor belts that can be tracked remotely via smartphone, according to the company.

Alibaba is betting that its years of observing consumer behavior will be useful to the country’s producers, at a time Beijing is championing what it calls its “Industrial Internet” of smart factories. Xunxi -- which means fast rhino -- is the fruition of what billionaire founder Jack Ma called “new manufacturing” in 2016.

It’s closely related to Alibaba’s “new retail” strategy of merging offline and online shopping: newer outfits like the Freshippo grocery chain have grown into a US$12 billion business, contributing a fifth of total revenue in the June quarter.

While the country houses some of the world’s most advanced plants -- which crank out everything from iPhones to electric vehicles -- smaller manufacturers are struggling to adapt to changing consumer needs in a slowing economy. Alibaba’s starting point is apparel but it eventually aims to help more manufacturers parse data, automate logistics and maintain just-in-time inventory, much as it already does for Chinese convenience chains and big-box retailers.

Upstart Pinduoduo Inc has lured small-town buyers away with cheaper bargains, while JD.com Inc has ventured beyond its traditional strength in consumer electronics into groceries, after COVID-19 spurred more online shopping. Shares in Alibaba gained roughly 30 percent so far this year, while both JD’s and Pinduoduo’s more than doubled.