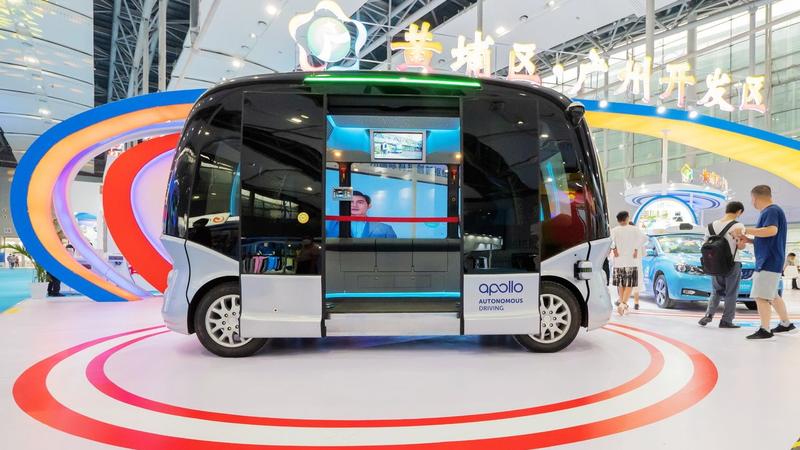 An Apollo autonomous bus is displayed during an exhibition in Guangzhou, Guangdong province, in August. (LI ZHIHAO / FOR CHINA DAILY)

Self-driving technology is expected to witness large-scale commercial application in the next five years, according to Robin Li Yanhong, chairman and CEO of internet search giant Baidu Inc.

Traffic congestion will be greatly alleviated and there will be no restrictions on vehicle purchase and use in the first-tier cities of China within five years, as autonomous driving technology becomes more popular, said Li at the Baidu World 2020, the company's annual flagship technology conference, in Beijing on Tuesday.

Li said the rate of traffic accidents will also be greatly reduced. "The intelligent transformation of the industry will bring conveniences to people's lives and promote economic development," he said.

According to Li, intelligent infrastructure based on the vehicle-road coordination system is expected to improve traffic efficiency by 15 to 30 percent, thus bringing 2.4 percent to 4.8 percent absolute economic growth.

Traffic congestion will be greatly alleviated and there will be no restrictions on vehicle purchase and use in the first-tier cities of China within five years, as autonomous driving technology becomes more popular, said Li at the Baidu World 2020, the company's annual flagship technology conference, in Beijing on Tuesday

The company will carry out in-depth strategic cooperation with China FAW Group Corp, the State-owned carmaker, in the fields of self-driving, artificial intelligence and digitalization. It has fully opened Apollo Go Robotaxi, its self-driving taxi service, in Changsha, Hunan province, Cangzhou, Hebei province and Beijing.

"Autonomous driving is definitely the future development direction of the automobile industry. It not only solves traffic safety problems, but also greatly improves the efficiency of transportation, brings about economic benefits and liberates people from repetitive driving," said Jiang Zheng, a self-driving expert at China's GAC research and development center.

Jiang said some countries are trying to promote implementation of relevant policies and regulations related to self-driving technology.

China is planning to realize the mass production of vehicles capable of conditional autonomous driving and commercialization of highly autonomous vehicles in certain circumstances by 2025, according to a blueprint issued by the National Development and Reform Commission, the Ministry of Industry and Information Technology and nine other ministries.

Road tests for self-driving vehicles are available in more than 20 provinces and cities in China. Companies such as SAIC Motor, BMW, Didi Chuxing and DeepBlue Technology have obtained authorization for passenger-carrying tests.

Baidu is one of several Chinese technology firms that have launched autonomous taxi services to the public in the country, in an attempt to bolster the large-scale commercial use of such cutting-edge technology. Didi Chuxing, China's largest ride-hailing platform, announced in June the opening of its on-demand robotaxi service for passengers in Shanghai.

Intelligent vehicles with fully autonomous functions may account for 10 percent of the new vehicles this year and self-driving vehicles will likely be part of people's daily lives in 2030, said Yang Diange, dean of the automobile engineering department at Tsinghua University.