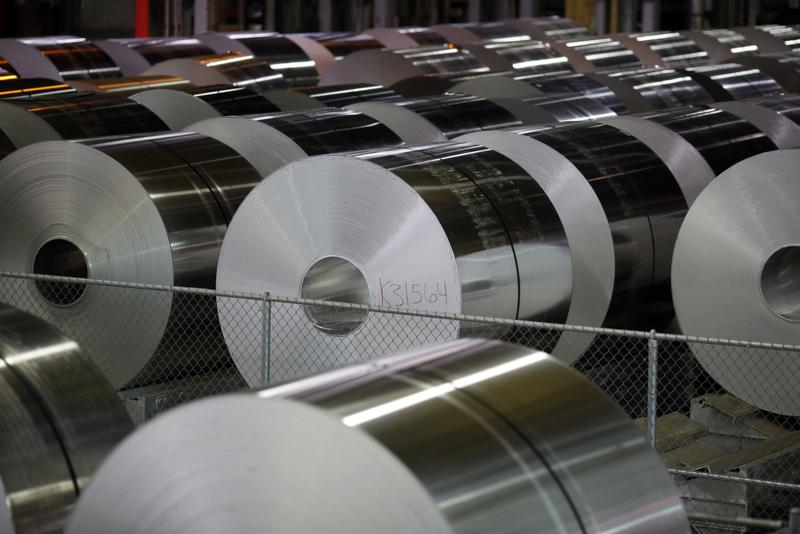 In this Jan 24, 2017 file photo, rows of aluminum coils sit on the floor of the Arconic Inc manufacturing facility in Alcoa, Tennessee, US.  (PHOTO / BLOOMBERG)

The US announced the removal of aluminum tariffs it slapped on Canada last month, after being threatened with retaliatory duties.

The 10 percent tariff on non-alloyed, unwrought aluminum was lifted a month after the Trump administration reimposed them on Canada, citing a “surge” of imports coming from the country. During the summer, US Trade Representative Robert Lighthizer had expressed concern about recent struggles by American aluminum producers.

Should tariffs be reimposed on our aluminum exports in the future, Canada will retaliate with perfectly reciprocal dollar-for-dollar tariffs as we have done in the past. We will always stand up for our workers and our industry.

While the USTR announced the removal of the tariff, it said it “expects” shipments from Canada will be no greater than 83,000 tons in September and November and no greater than 70,000 tons in October and December, effectively signaling a quota. But Canada has not yet made a commitment to a volume limit.

Deputy Prime Minister Chrystia Freeland told journalists in a press conference that Canada would drop the counter tariffs it threatened as retaliation, but left the door open for future measures if the US imposed duties. USTR said it would reimpose the 10 percent tariff retroactively if actual shipments exceed 105 percent of the expected volume for any of the months.

“Should tariffs be reimposed on our aluminum exports in the future, Canada will retaliate with perfectly reciprocal dollar-for-dollar tariffs as we have done in the past,” Freeland said. “We will always stand up for our workers and our industry.”

ALSO READ: Canada vows to hit back US after reimposes aluminium tariffs

The Trump administration’s decision to reverse course in a matter of weeks comes in the shadow of President Donald Trump’s re-election efforts, in which major polls show him trailing Democratic nominee Joe Biden in key battleground states. The tariffs increased domestic aluminum prices amid a shortage of beverage cans in North America, heightening concerns that an increase in the raw material could fall on the shoulders of domestic brewers and soda companies, and eventually consumers. 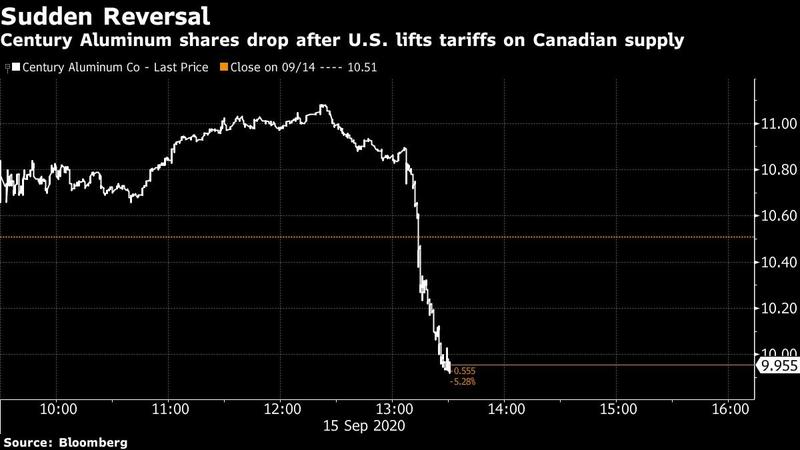 Shares of Century Aluminum, the second-largest US producer with significant production in the country, slumped 11 percent to US$9.33, reversing an earlier 5.4 percent gain.

“After consultations with the Canadian government, the United States has determined that trade in non-alloyed, unwrought aluminum is likely to normalize in the last four months of 2020, with imports declining sharply from the surges experienced earlier in the year,” the US Trade Representative’s office said in a statement.

A senior Canadian government official stressed the USTR announcement was a US decision to drop tariffs.

“What American manufacturers need now is certainty that these tariffs won’t make another reappearance,” Myron Brilliant, EVP and head of international affairs, US Chamber of Commerce, said in an emailed statement. “Setting aside these threats once and for all will allow American job creators to focus on economic recovery.”

Ball Corp, the biggest aluminum can producer in the world, last month said demand in North America continued to outstrip supply and accelerated meaningfully in Europe and South America.

ALSO READ: WTO to investigate US steel and aluminum tariffs

Lockdowns have forced restaurants and bars, which rely heavily on sales of beer from kegs, to shutter, meaning consumers are stocking up on 12-packs. Makers of aluminum can sheet have seen demand gain as people drink more at home.

Alf Barrios, the chief executive of Rio Tinto Aluminum, the largest producer in Canada, said in an emailed statement that the decision is a positive step that ensures the North American supply chain will remain strong amid challenging global conditions.

The tariffs have been the focus of an industry debate for months. The American Primary Aluminum Association, which represents Century Aluminum and Magnitude 7 Metals, had sought the tariff in May, saying a rise in Canadian metal had caused prices to collapse. The Aluminum Association of the US, which represents Alcoa Corp, Rio Tinto and dozens of other aluminum-parts makers, argued that imports were virtually unchanged since 2017.