What do you think when you look at an old painting? Maybe you consider its history, maybe the stories of the people featured in the frame, or the message delivered by the artist?

"A truly great painting with hundreds of years of history carries a sense of motion within it, whether in the gestures of the people portrayed in it or the emotion expressed," says Zhu Lexian, director of the documentary studio within Tencent Penguin Pictures.

"However, normally, the paintings don't actually move and we try to make it happen," Zhu adds.

That's right. Zhu and his team make art that moves. People act out the images in the paintings and bring them to life. This is living art, one of a kind.

For any of the viewers, who have wondered about what was happening in those ancient Chinese paintings, the show provides an imaginative glimpse with humor and a connection to contemporary life.

In an online program, Chinese Paintings' Adventure, real actors bring to life some artworks, such as Xihu Yinqu Tu by Qian Xuan of Song Dynasty (960-1279), which depicts a reclusive poet, his disciple and a crane appreciating plum blossoms, and the Portrait of Yunli, Prince Guo, believed to be the work of Mangguri (1672-1736), both of which are housed at the Palace Museum. (PHOTO PROVIDED TO CHINA DAILY)

Premiered on Aug 19, the 30-episode show, with each episode lasting around five minutes, has based its content on 14 famous ancient Chinese paintings, spanning from the Five Dynasties and Ten Kingdoms (907-960) to the Qing Dynasty (1644-1911).

"Our goal is to popularize ancient Chinese paintings among the viewers and to make art education fun, simple and easy to comprehend. We want them to learn the history of, and the stories behind, the paintings in an interesting way," says Zhu, the program's executive producer.

The company released a seven-episode docudrama last year titled War of Seven Kingdoms, which introduced the history of the Spring and Autumn Period (770-476 BC) and the Warring States Period (475-221 BC). It was a huge hit.

The first episode of the program, Chinese Paintings' Adventure, features Court Ladies Preparing Newly Woven Silk by Tang Dynasty (618-907) painter Zhang Xuan－the existing copy of which is now housed in the Boston Museum of Fine Arts. The painting provides a precious insight into the women working in the ancient royal court.

To make the painting come alive, the show has 12 actresses play the 12 characters depicted in the painting. These include women pounding silk with wooden poles and sewing and ironing freshly-woven silk.

In an online program, Chinese Paintings' Adventure, real actors bring to life some artworks, such as Xihu Yinqu Tu by Qian Xuan of Song Dynasty (960-1279), which depicts a reclusive poet, his disciple and a crane appreciating plum blossoms, and the Portrait of Yunli, Prince Guo, believed to be the work of Mangguri (1672-1736), both of which are housed at the Palace Museum. (PHOTO PROVIDED TO CHINA DAILY)

The actresses also have conversations while working. They complain about the demanding job, talk about the different kinds of work assigned by the boss and make fun of one another's techniques.

"I learned about this painting from a textbook in school. The women in the painting are so vivid when they start to talk," commented one fan named Yu Guanghan on micro-blogging platform Sina Weibo.

"The actresses look exactly like the women in the painting. They talk and joke just like we do while working in the office, which is very interesting," commented another fan, Ma Da. "Though the conversation may not be real and was written by the scriptwriters, it's fun to watch."

According to Zhu, so far, the show has received over 26 million views online, which is beyond his expectations.

"It shows that the audience loves this creative way of introducing ancient Chinese paintings," says Zhu.

The show's viewers are mostly people aged from 18 to 24, Zhu says. To appeal to the younger audience, scriptwriters of the program tried to connect the people depicted in the ancient Chinese paintings with contemporary life.

For example, from the famous paintings by Su Hanchen, viewers are offered an insight into the lives of children during the Song Dynasty (960-1279). One of the paintings, titled Jiaoyin Jiqiu Tu, or Children at Play in Summer－currently housed at the Palace Museum in Beijing－captures the lovely spirit and appearance of children playing a ball under the shade of a palm tree. Their mother is looking at them with a smile on her face. 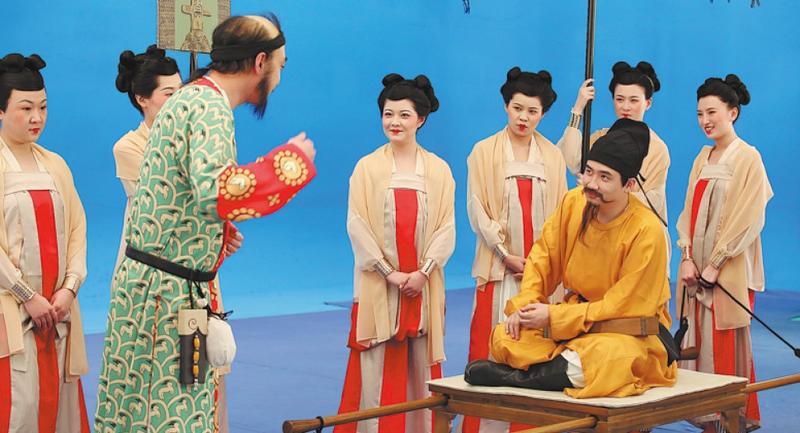 Actors bring the paintings to life by imagining the conversations that might have taken place between the featured characters. (PHOTO PROVIDED TO CHINA DAILY)

The actress playing the role of the mother not only keeps her children company but urges them to finish their homework.

"The mother in the painting is characterized as a mother, who wants her children to play outside and, at the same time, feels the need to get her children to do their homework as soon as possible. This conversation between a mother and her children is commonly seen nowadays."

Adding modern elements that contemporary people can relate to in their own lives has turned out to be "an easy way for the audience to remember the ancient paintings".

According to Zhu, the creative team started to prepare for the show in July last year. They researched many ancient Chinese paintings and spent lots of time working on the costumes, makeup and scripts.

History of the paintings is also vital as each episode of the show opens and ends with the historical background of the featured artwork.

He notes that the second season of the show may shift its focus to paintings portraying natural scenery and works that are larger in scale. One subject under consideration is the masterpiece Along the River During the Qingming Festival by 12th-century painter Zhang Zeduan, currently housed at the Palace Museum in Beijing.

The 5.28-meter scrolled painting gives a panoramic portrayal of flourishing urban life, covering all social classes, in Bianliang (today's Kaifeng in Henan province), which was the capital of the Northern Song Dynasty (960-1127).