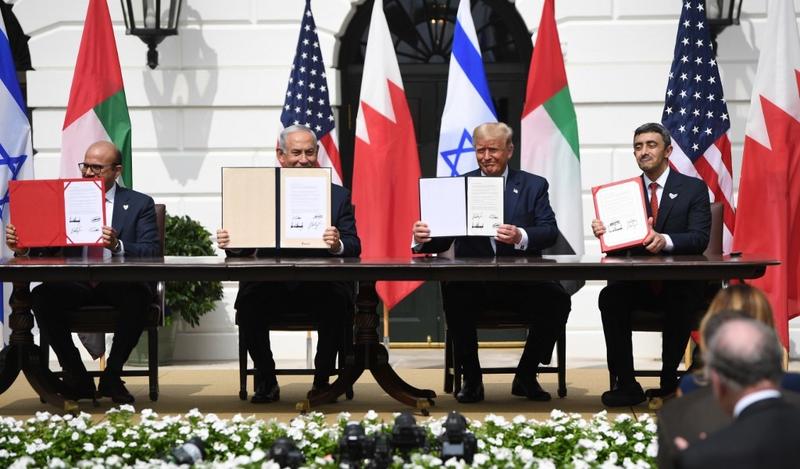 (From left) Bahrain Foreign Minister Abdullatif al-Zayani, Israeli Prime Minister Benjamin Netanyahu, US President Donald Trump and UAE Foreign Minister Abdullah bin Zayed Al-Nahyan hold up documents as they participate in the signing of the Abraham Accords where the countries of Bahrain and the United Arab Emirates recognize Israel, at the White House in Washington, DC, Sept 15, 2020. (SAUL LOEB / AFP)

WASHINGTON  - The United Arab Emirates and Bahrain signed agreements on Tuesday to establish formal ties with Israel, becoming the first Arab states in a quarter century to break a longstanding taboo, in a strategic realignment of Middle East countries against Iran.

The deals, denounced by the Palestinians, make them the third and fourth Arab states to take such steps toward normalizing relations since Israel signed peace treaties with Egypt in 1979 and Jordan in 1994

US President Donald Trump hosted the White House ceremony, capping a dramatic month when first the UAE and then Bahrain agreed to reverse decades of ill will without a resolution of Israel’s dispute with the Palestinians.

The deals, denounced by the Palestinians, make them the third and fourth Arab states to take such steps toward normalizing relations since Israel signed peace treaties with Egypt in 1979 and Jordan in 1994.

Meeting Netanyahu earlier in the Oval Office, Trump said, “We’ll have at least five or six countries coming along very quickly” to forge their own accords with Israel.

Later Trump told reporters a third Gulf Arab state, Saudi Arabia, would strike an agreement with Israel “at the right time.” The Saudi cabinet stressed in a statement the need for a “just and comprehensive solution” to the Palestinian issue.

Saudi Arabia is the biggest Gulf Arab power. Its king is custodian of Islam’s holiest sites and rules the world’s largest oil exporter. Despite its own reluctance, the kingdom’s quiet acquiescence to the agreements was seen as crucial.

‘Change the course of history’

The ceremony provided Trump with valuable imagery as he tries to hold on to power in a Nov 3 presidential election. Flags of the United States, Israel, the UAE and Bahrain were in abundance.

The back-to-back agreements mark an improbable diplomatic victory for Trump. He has spent his presidency forecasting deals on such intractable problems as North Korea’s nuclear program only to find achievements elusive

“We’re here this afternoon to change the course of history,” Trump said from the White House balcony.

The back-to-back agreements mark an improbable diplomatic victory for Trump. He has spent his presidency forecasting deals on such intractable problems as North Korea’s nuclear program only to find achievements elusive.Trump called the deals “a major stride in which people of all faiths and backgrounds live together in peace and prosperity” and declared that the three Middle East countries “are going to work together, they are friends.”

Bringing Israel, the UAE and Bahrain together reflects their shared concern about Iran’s rising influence in the region and development of ballistic missiles. Iran criticized both deals.

All three of the Middle East leaders hailed the agreements and Trump’s role in glowing terms, with Netanyahu saying it gave hope to “all the people of Abraham.”

But the UAE and Bahraini officials both sought to reassure the Palestinians that their countries were not abandoning them or their quest for statehood in the West Bank and Gaza Strip, despite the Palestinian leadership having decried the deals as a betrayal of their cause. 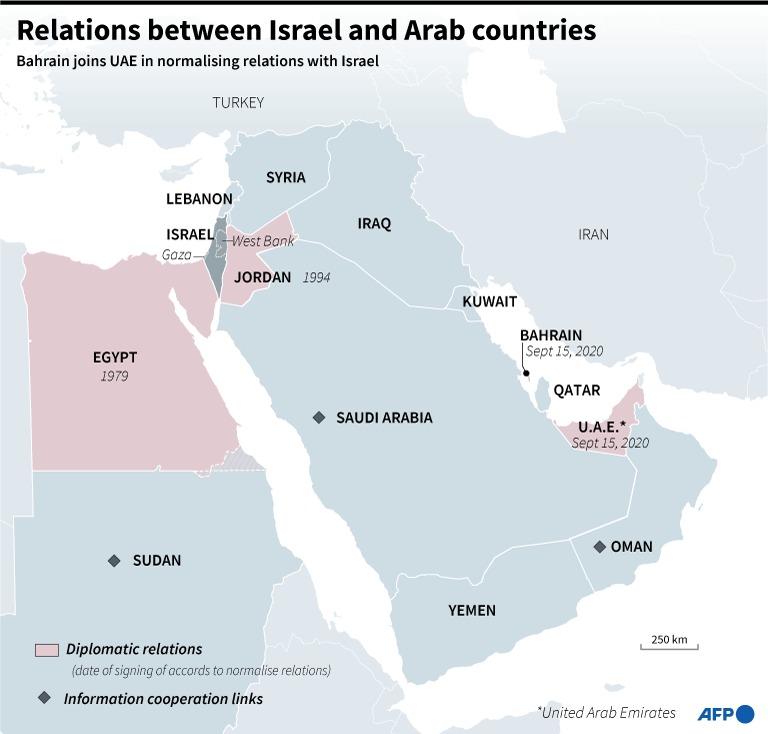 In a sign that regional strife is sure to continue while the Israeli-Palestinian conflict remains unresolved, Palestinian militants fired rockets from Gaza into Israel during the ceremony, the Israeli military said.

“This is not peace, this is surrender in return for the continuation of the aggression,” read a tweet posted on the Twitter account of the Palestine Liberation Organization.

With Trump seeking four more years, the accords could help shore up support among pro-Israel Christian evangelical voters, an important part of his political base.

Another target of the White House plans, in addition to Saudi Arabia, is Oman, whose leader spoke with Trump last week. Oman sent its ambassador to Tuesday’s ceremony, a senior US official said. No Saudi representative attended.

Meeting the Emirati foreign minister before the ceremony, Trump thanked the UAE for being first in the Gulf to agree on normalizing ties with Israel and left little doubt the Iran issue was overhanging the event. 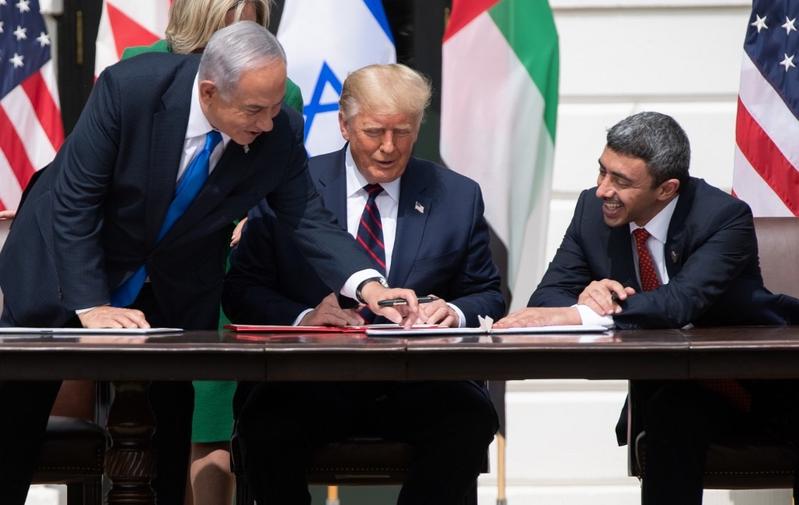 Israeli Prime Minister Benjamin Netanyahu(L), US President Donald Trump, and UAE Foreign Minister Abdullah bin Zayed Al-Nahyan(R)smile as they participate in the signing of the Abraham Accords where the countries of Bahrain and the United Arab Emirates recognize Israel, at the White House in Washington, DC, Sept 15, 2020. (SAUL LOEB / AFP)

Trump predicted that Iran, under heavy US sanctions, would want to reach a deal with Washington, which has been trying to get it to renegotiate an international nuclear accord. Tehran shows no sign of budging.

Israel’s pact with the UAE, titled “Treaty of Peace, Diplomatic Relations, and Full Normalization,” was more detailed and went further than the Bahraini document, declaring peace between countries that never fought a war against each other.

Both documents cited the need to justly resolve the Israeli-Palestinian conflict but neither specifically mentioned a two-state solution.

In a nod to the coronavirus, the White House encouraged but did not require participants to wear masks. It was left to the leaders whether to shake hands, and they did not do so in public. Most people in the crowd did not wear masks.

Some differences remain despite warming ties. Trump said on Tuesday he would have no problem selling advanced stealth F-35 fighter jets to the UAE, which for years has sought to obtain them. Israel, which has the F-35, objects to such a sale.

Frustrated by the Palestinians’ refusal to take part in Trump’s Middle East peace initiative, the White House has sought to bypass them in hopes they will see the deals with the UAE and Bahrain as incentives, even leverage, for peace talks.

Speaking to Fox News hours before the ceremony, Trump predicted the Palestinians would eventually forge peace with Israel or else be “left out in the cold.”

The Palestinian leadership has long accused Trump of pro-Israel bias and denounced the Arab rapprochement with Israel, even though Netanyahu agreed, in return for normalization with the UAE, to suspend a plan to annex parts of the occupied West Bank.

Although Israeli-Palestinian negotiations broke down in 2014, some Gulf Arab states and several other Arab countries have long had quiet, informal contacts with Israel.