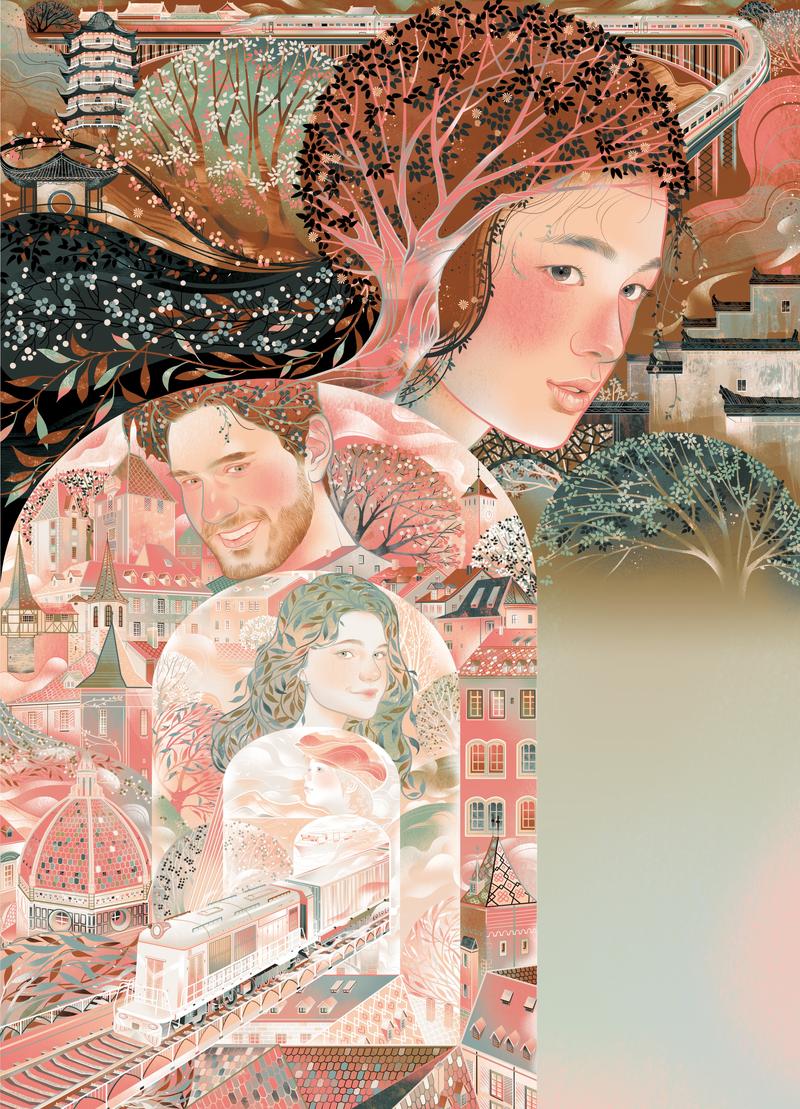 Italian trader Nicola Sangiovanni has kept himself busy transporting European food and beverages to the bustling metropolis of Chongqing in China in recent years.

During the COVID-19 pandemic, he has been able to continue doing business thanks to rail freight services between China and Europe.

“When COVID-19 spread across the world — with flights halted, borders shut and companies facing the prospect of missing contract deadlines — China-Europe freight trains helped us make up for lost time,” he said.

Amid the outbreak, Sangiovanni has sent 10 container loads of wine from the Italian city of Genoa to Chongqing on freight trains traveling to the city from Europe via Xinjiang Uygur autonomous region, every two months.

These trains provide “fast, low-cost and convenient transportation”, he said.

“The China-Europe rail freight link has helped our business return to normal and I think it could also help boost trade,” he said.

Claudia Vernotti, director of ChinaEU, a business-led association in Brussels, the Belgian capital, said rail freight has become the preferred means of transporting goods between Europe and China during the pandemic.

Global air and sea freight capacity fell in the first seven months of this year because of restrictions imposed at airports, ports and national borders to contain the outbreak, she said.

Reduced cargo flights have resulted in the cost of such services rising two to three-fold compared with rates last year, while transit times have lengthened, she added.

China-Europe rail freight services, launched in 2011, are considered a significant part of the Belt and Road Initiative aimed at boosting trade between China and other countries and regions.

According to China State Railway Group, from March to July, the services from Chinese cities to Europe set a number of records.

In July, China-Europe freight trains made 1,232 journeys, the highest monthly figure ever, and a rise of 68 percent year-on-year. 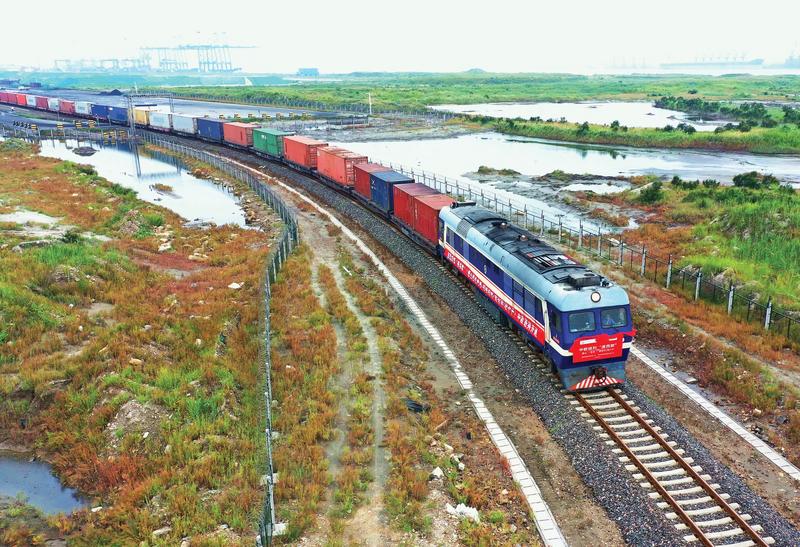 A train leaves the Caofeidian Port in Tangshan, Hebei province, on Aug 26. It will travel to Europe via Xi’an, Shaanxi province. (YANG SHIYAO / XINHUA)

In the first seven months of this year, 6,354 trips were made by these trains, a year-on-year rise of 41 percent. They transported 574,000 standard cargo containers, up 46 percent compared with the same period last year.

Vernotti said: “These trains are a better fit for goods that need to be transported faster than by sea, and are cheaper than air freight. I believe the China-Europe rail freight link has great development potential and will play a crucial role in reviving global trade and business ties as a safer and greener form of logistics.”

Since March 21, when the first batch of medical supplies to combat COVID-19 was sent by rail from Yiwu, Zhejiang province, to Madrid, the Spanish capital, China-Europe freight trains have contributed greatly to the global fight against the virus.

By the end of July, the trains had transported 4.97 million items of medical supplies weighing a total of about 39,000 metric tons, according to official figures.

“The trains have transported a great deal of urgently needed anti-epidemic material,” he said. “At the end of February, we also opened the freight services to overseas individuals to help them transport personal items.”

In the first seven months of this year, 585 journeys starting in Zhengzhou, capital of Henan, were made by freight trains to Europe, with a total cargo value of US$2.34 billion, a year-on-year rise of just over 18 percent. The total weight of the cargo was 364,700 tons, up by nearly 32 percent year-on-year.

“Moreover, without these trains, far more damage would have been caused to the global supply chain, and the shortage of anti-epidemic materials in countries along the route would have been more severe,” he said.

Wang Tao, general manager of Henan Curry Supply Chain Management, said that in April alone, he booked two trains, each with 43 standard cargo containers, for a local factory to send medical supplies from Zhengzhou to Hamburg, Germany, and to Moscow, the Russian capital.

Wang, whose main line of work is international logistics, said his business has been severely affected by the pandemic, and many of his clients now favor rail services instead of sending goods by sea or air.

“Ships, which are slower than trains, have been frequently delayed or halted during the pandemic. Our products were once stuck in a port for more than a month, upsetting our overseas retailers, as they were unable to receive the products on time,” he said. 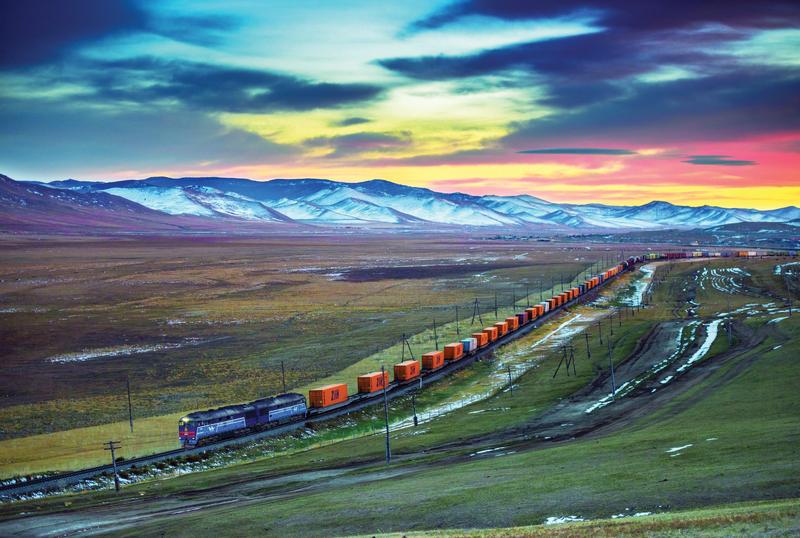 A freight train from Zhengzhou, Henan province, travels on the grassland of Inner Mongolia toward Europe. (PHOTO PROVIDED TO CHINA DAILY)

Wang added that it takes 34 to 40 days to transport goods from Zhengzhou to Hamburg by ship, but only 16 to 18 days by rail, and the latter services are also reasonably priced.

“From March to July, the volume of rail freight to Europe we arranged for clients was double that for the same period last year, while shipping and air volumes were down by nearly 50 percent last year,” he said.

Axel Mattern, joint CEO of the Port of Hamburg Marketing, said he has also witnessed a surge in the frequency and volume of goods carried by China-Europe freight trains this year.

Some 200 such trains running from Chinese destinations to Hamburg are available for bookings.

“Despite the COVID-19 pandemic, rail traffic between China and Hamburg remained steady and even rose in January and on into March and April. The volume of imported and exported goods is picking up and we are also making new connections with inland ports in China,” Mattern said.

He added that Hamburg is “China’s Gateway to Europe”, as it is an important port for Chinese goods to reach the continent before they are distributed to destinations in countries such as Spain, Italy, France and the Czech Republic.

Last year, the Port of Hamburg handled about nine million TEUs (20-foot equivalent units) of freight and more than 136 million tons of cargo. Some 2.7 million TEUs were from China.

Mattern said global shipping capacity this year has been greatly reduced and air traffic largely halted due to the pandemic. As a result, many customers have chosen rail freight services as an alternative mode of transportation.

Rail freight has also been an effective way to transport medical supplies, such as face masks, to help European countries fight the outbreak, he said.

He added that rail and shipping freight businesses have now started to pick up, especially those in China and elsewhere in Asia, as many countries throughout the world have eased coronavirus restrictions to rescue their economies.

Although rail freight still lags behind its marine counterpart in terms of the quantity of goods being transported, it “definitely plays an important role” in boosting economic ties and trade between China, Germany and other European countries, he said.

“The signs are quite good. Our port is busy and we are getting more trains and ships. The economic forecast, especially for Sino-German business relations, is very good, according to reports from many institutions.”

A new line is operating between the Guangdong-Hong Kong-Macao Greater Bay Area in southern China and the German city of Duisburg. The first train on the line, carrying electronic products, machinery and textiles, departed from Shenzhen, Guangdong province, on Aug 18. Five days later, it left China through the Alataw Pass, a major rail port in Xinjiang.

On Aug 26, Luoyang city, Henan, also launched its first China-Europe rail freight service when a train loaded with tractors left for Barnaul, Russia — a journey of about 20 days.

Cui Hongjian, director of the Department of European Studies at the China Institute of International Studies, said economic development worldwide after the pandemic will depend considerably on market efficiency and global industrial supply chain security.

China-Europe freight trains, which have shown great stability and potential during the outbreak, could meet the requirements of such development, Cui said.