One thing director Christopher Nolan’s latest cinematic extravaganza, Tenet, does brilliantly is lay to rest the claims that a black actor could never play James Bond. For all its time shifting algorithms and inverted action, Tenet is a Bond film; a “thank you” to theoretical physicist Kip Thorne doesn’t make it sci-fi.

Tenet is precisely the kind of big budget, big screen-ready film exhibitors need right now. It starts with a considerable bang: a (maybe) CIA squad is retrieving its asset and a crucial artifact under cover of a terrorist action at the opera. It is propulsive, tense, laser-focused action, and raises hopes for what’s to come. Sadly, the following 135 minutes don’t quite live up to that standard because it needs to tell a story. That is not Nolan’s strongest suit.

In a nutshell: the pretentiously dubbed the Protagonist (BlacKkKlansman’s John David Washington, Denzel’s son) teams up with mysterious intelligence type Neil (Twilight’s Robert Pattinson, continuing to put that breakout role in his past) to find the maker of a temporal super-weapon that could destroy humanity. Handsome man, great suits, globetrotting, preventing WWIII… It’s a Bond movie!

Following the oddly compact Dunkirk, it’s no surprise Nolan was keen to return to the lofty ideas and movie dynamics that made his work so highly anticipated. Tenet is loaded with all manner of physics nuggets, cerebral concepts and clever historical references (google Sator Square) that make it more puzzle box than immersive, IMAX cinematic experience. Interstellar’s biggest flaw is also its lack of emotion, despite its overt sentimentality. 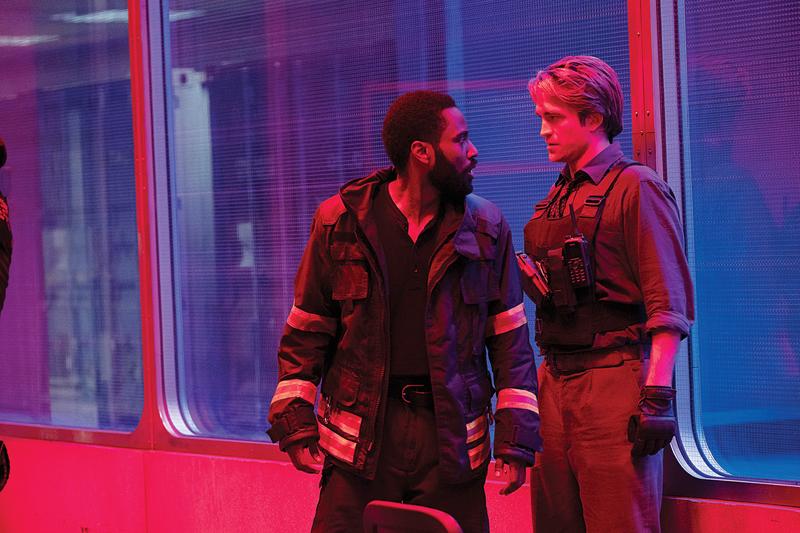 The same happens here. If villain Andrei Sator’s (Kenneth Branagh) dysfunctional relationship with his art appraiser wife Kat (Elizabeth Debicki, Widows) was supposed to inject the film with a shred of humanity, it missed the vein. That balancing act, between technicality and affecting narrative, is one Nolan has yet to master on a level with, say, Steven Spielberg. His work has an icy veneer, and it’s unsurprising that his “warmest” films — The Dark Knight, The Prestige — were co-written with his more nuanced brother Jonathan (Westworld, Person of Interest). Nolan is a great filmmaker but, at best, a modest storyteller.

Nonetheless to disregard Nolan’s aptitude for jaw-dropping visuals and ambitious concepts is to be willfully contrarian. The opera house extraction is just a start: the already famous 747 set piece, a lusciously red-washed hostage negotiation and an airport infiltration fight do-over are, in a word, stellar.

For those who enjoy grappling with temporal paradoxes there’s plenty to chew on. But there are just as many frustrating “what’s going on?” moments. The less said about the frequently unintelligible Bane-style vocalizations the better, although Nolan has, again, assembled a faultless cast that includes regular Michael Caine, Himesh Patel (Yesterday), Martin Donovan (Ant-Man), Clemence Poesy (Harry Potter), Dimple Kapadia (Dil Chahta Hai) and Aaron Taylor-Johnson (Nocturnal Animals), who come very, very close to selling the on-screen ludicrousness.

Might it benefit from a second viewing? Perhaps, but great films shouldn’t require one in order to be understood. Tenet is ultimately a film you look at clinically and admire for its technical prowess, but not one you necessarily love.