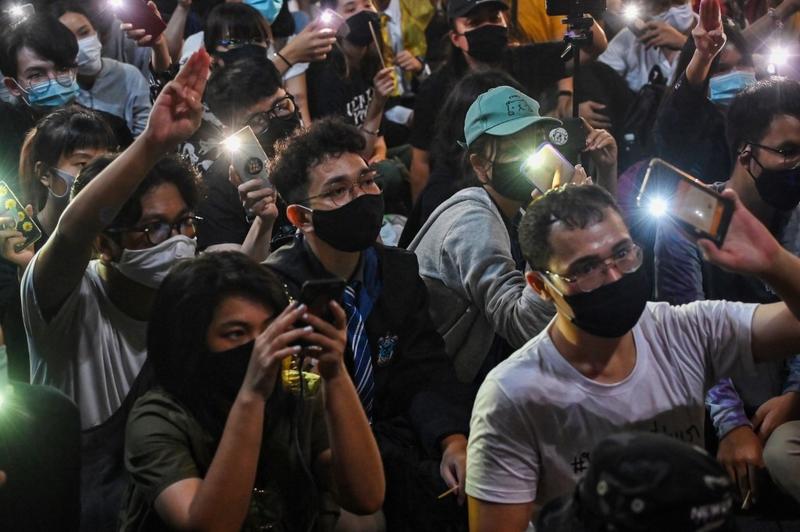 A protester in a wizard robe sits amidst a crowd as they sing along to a protest song during a Harry Potter-themed anti-government rally at the Democracy Monument in Bangkok on August 3, 2020. (LILLIAN SUWANRUMPHA / AFP)

BANGKOK - Thai police have summoned five organizers of student-led protests against the government, saying they had violated a coronavirus emergency decree that forbids large gatherings, police told Reuters on Wednesday.

The five organizers were “summoned for questioning and to hear the charge of breaching the emergency decree,” police lieutenant colonel Athich Donnanchai, deputy director of Nanglerng police, told Reuters

Among those called for questioning was human rights lawyer Anon Nampa, who on Monday had demanded reforms of Thailand’s powerful monarchy, a highly sensitive topic.

Police said, however, Anon, 35, was being summoned over an earlier protest in July outside the army headquarters.

That demonstration was among a series of near-daily, student-led rallies around Thailand since mid July that have demanded the resignation of Prime Minister Prayuth Chan-ocha and amendments to a military-drafted constitution they say maintains army influence over the political system.

The five organizers were “summoned for questioning and to hear the charge of breaching the emergency decree,” police lieutenant colonel Athich Donnanchai, deputy director of Nanglerng police, told Reuters.

Asked about his summons, Anon in a text message said the decree “is a law to gag and stop activism”.

The government last month said the emergency decree in place since March would only be used as a measure against the coronavirus and from August onwards said it would not be used to prevent political rallies.

Six protest leaders or political activists in two different provinces were summoned last month for breaching the emergency decree, among other alleged offenses.

Anon was separately the subject of an official complaint on Wednesday that asked police to take action against him for breaches of the emergency decree and of the constitution, concerning his remarks about the monarchy.

Defaming the monarchy is punishable by up to 15 years in prison under Thailand’s strict lese majeste law, which Anon had also criticized.

Police said they were looking into what took place at Monday’s protest, where Anon was a key speaker.

Army chief Apirat Kongsompong made no direct reference to the protests in remarks at a military academy on Wednesday, but in a speech that mentioned the coronavirus, he took a swipe at “nation-haters”, a term used increasingly to describe opponents of the Thai establishment.

“Hating the nation, hating one’s own country, this a disease that is not curable,” he told military cadets.