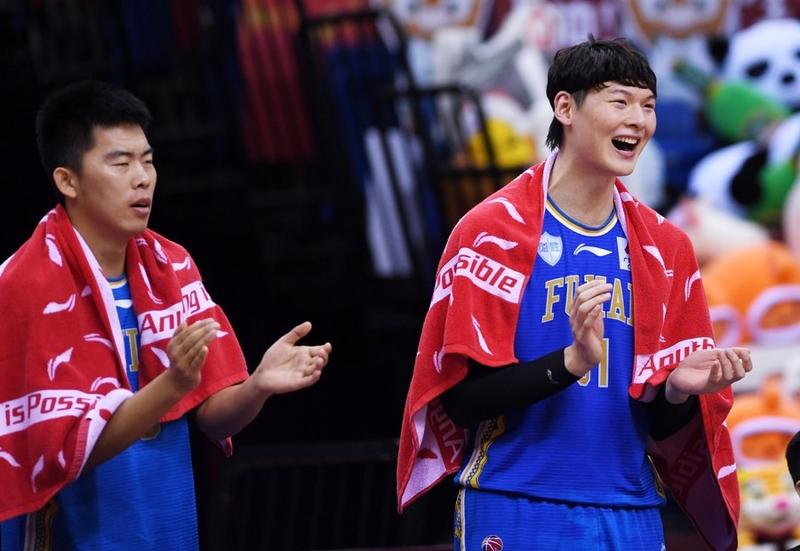 Wang Zhelin (right) and Wang Runfeng of the Fujian Sturgeons celebrate during the round of 12 match against the Zhejiang Lions at the 2019-2020 Chinese Basketball Association (CBA) league playoffs in Qingdao, east China's Shandong province, July 31, 2020. (PHOTO / XINHUA)

QINGDAO - The Fujian Sturgeons defeated the Zhejiang Lions 132-119 in the playoffs of the Chinese Basketball Association (CBA) here on Friday, while the Qingdao Eagles joined them to qualify for the quarterfinals after overcoming the Shandong Heroes 129-120 in a local derby.

Zhejiang managed to tie the game 81-81 in the third quarter, but Ty Lawson led Fujian to launch an 11-2 run to regain a seven-point advantage

The Sturgeons grabbed a 68-61 lead in the first half, with forward Chen Linjian burying seven three-pointers out of eight.

Zhejiang managed to tie the game 81-81 in the third quarter, but Ty Lawson led Fujian to launch an 11-2 run to regain a seven-point advantage.

Lawson finished a three-point play in the last quarter to enlarge the margin to 10 points, keeping the game beyond the reach of Zhejiang.

"This is a big achievement for us. The guys invested a lot of effort on the court, and we will continue with our dream," said Fujian coach Aleksandar Kesar.

"Our players went all out today and throughout this season. I hope the young guys have become more experienced. We will come back next year," said Li Chunjiang, coach of Zhejiang.

The veteran guard took the center stage in the second half, as he contributed 13 points and five assists in the third quarter to help Shandong cut the deficit to four points for a brief period.

Wang Qingming hit a three-pointer with 50 seconds remaining, and Lin Weihan made a layup from a steal to secure the victory for Qingdao.

Fujian will face the Beijing Ducks, while Qingdao's opponents will be defending champions the Guangdong Southern Tigers in the quarterfinals on August 2.