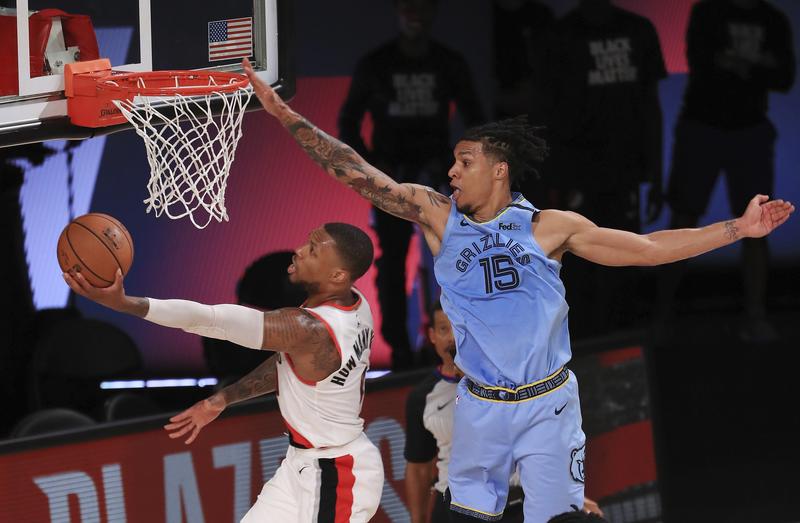 CJ McCollum scored 33 points, Damian Lillard added 29 and the Portland Trail Blazers overwhelmed the Memphis Grizzlies in overtime Friday to win, 140-135, in the first Orlando-area seeding game for both teams.

Ja Morant led a breakaway off of a defensive rebound in the closing seconds, but got tangled with a defender and was unable to get off a shot

Portland (30-37) built a first-half lead then surged ahead 75-62 in the third quarter before a 22-6 Memphis run pushed the Grizzlies (32-34) ahead. The Trail Blazers played from behind for much of the fourth quarter, but remained within striking distance.

Two 3-pointers from Carmelo Anthony in the final 1:23 gave Portland the lead, including a 124-122 advantage with 37.5 seconds remaining. Brandon Clarke, who scored 21 points for Memphis off the bench, responded with a game-tying basket.

Ja Morant led a breakaway off of a defensive rebound in the closing seconds, but got tangled with a defender and was unable to get off a shot.

Morant, the Grizzlies’ leading scorer on the season at just under 18 points per game, finished with 22 points Friday. He had only two points on 1-of-5 shooting at halftime, but came to life to lead the third-quarter run.

Morant scored seven consecutive points over one stretch, capped with a spectacular dunk off a lob from Clarke. Morant returned the favor to Clarke in the fourth quarter with one of his 11 assists, but Clarke was hit with a technical foul on the ensuing celebration.

The technical marked a critical turning point. Memphis went ahead by seven points on the dunk, but Portland began a 12-4 run over the next 2:21. Neither team led by more than two points for the remainder of regulation.

That changed in overtime. McCollum knocked down a 3-pointer, followed immediately by another from Gary Trent Jr. for three of his 17 points off the bench. Trent went 4 of 5 from 3-point range for the game and McCollum went 3 of 6 on an afternoon in which the Trail Blazers went 13 of 30 from deep.

Jaren Jackson Jr., who matched McCollum’s game-high 33 points, went 6 of 15 from 3-point range. However, Memphis shot just 13 of 41 from outside as a team.

The Grizzlies came into the NBA bubble in the Orlando area with a 3 1/2-game lead for the No. 8 seed in the Western Conference playoff race. Portland was one of three teams just behind Memphis for the final postseason berth.