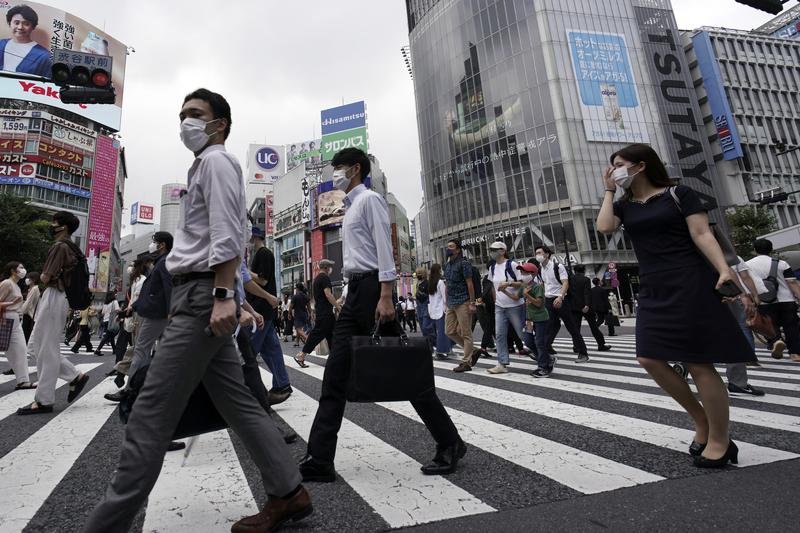 It was the second day in a row that the number of cases in the capital rose by more than 400.

Though Tokyo Governor Yuriko Koike has said the city could declare its own state of emergency, the central government says there is still no need to do so nationally despite a record spike in several cities around the nation.

Japan’s stately traditional kabuki theatre resumed performances on Saturday after a five-month break due to the novel coronavirus, with musicians in masks, actors farther apart on stage and only half the usual number of seats.

The re-opening of Tokyo’s famed Kabukiza Theatre, which called off performances from March due to the spread of the coronavirus, came even as new cases have spiked to record highs around the country. 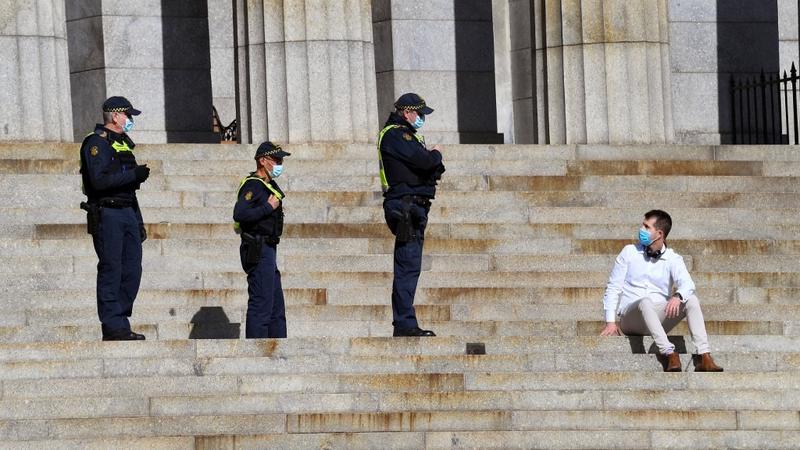 Protective Services officers speak to a man sitting on the steps of the Shrine of Remembrance in Melbourne on July 31, 2020. As greater Melbourne passed the halfway point of a lockdown initially intended to last six weeks, the state of Victoria - of which Melbourne is the capital - recorded over 600 new cases, leaving Premier Daniel Andrews to flag harsher restrictions in a bid to cut the infection rate. (WILLIAM WEST / AFP)

Australia’s second most populous state, Victoria, reported 397 cases of the new coronavirus on Saturday, down by more than a third from Friday, but authorities said they are considering further restrictions as numbers remain worrisome.

Three people died from factors related to COVID-19 in the 24 hours to early Saturday, Victoria Premier Daniel Andrews said. This brings the state’s deaths in the pandemic to 116 and Australia’s tally to 201.

Victoria, where the capital Melbourne is under a reimposed six-week stay-home order, had prided itself early in the pandemic on a tough approach to social distancing. Now the state accounts for about 60 percent of Australia’s 17,300 cases.

On Thursday, the state, where wearing face masks is now mandatory, reported a record 723 infections and 13 deaths. Victoria reported 627 new infections and eight deaths on Friday.

Andrews had warned this week that Melbourne’s lockdown restrictions could be extended past the initial mid-August end date and further social-distancing measures taken if daily case numbers remained high.

Neighbouring New South Wales, Australia’s most populous state, reported 17 cases of COVID-19 and one death on Saturday - the state’s first death in more than a month.

Brunei reported no new cases of COVID-19 on Saturday with the national tally of cases standing at 141.

It marked the 86th consecutive day without new cases.

According to Brunei's Ministry of Health, no active cases are being treated at the National Isolation Center.

Currently 497 individuals are undergoing mandatory isolation at the monitoring centers provided by the government, as they arrived in the country after traveling abroad.

There have been three deaths resulting from COVID-19 in Brunei and a total of 138 patients have recovered.

The ministry said 2,012 more people were discharged from hospitals, bringing the total number of recovered patients to 67,919.

The virus has spread to all the country's 34 provinces.

The Iraqi Health Ministry on Friday recorded 3,346 new COVID-19 cases, the highest daily increase since the outbreak of the disease, while a health official confirmed that the authorities will return to partial curfew after the Eid al-Adha holiday.

The new cases brought the total nationwide infections to 124,609, as the ministry's health teams and institutions have used over 1,000,000 testing kits so far, the ministry said in a statement.

It also reported 70 fatalities during the day, raising the death toll to 4,741, while 1,888 more patients recovered, bringing the total number of recoveries to 87,434.

Riyadh Abdul-Amir, head of the ministry's public health department, said in a press release that the health situation in the country is serious, but the authorities will apply the full curfew only in this week, which covers the Eid al-Adha holiday, and afterward will return to the partial curfew. 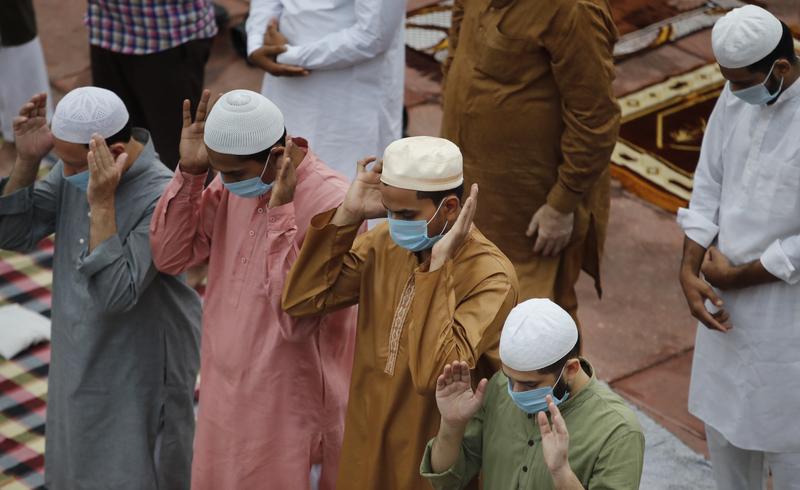 India recorded the highest ever single-day spike of 57,118 of fresh COVID-19 cases on Saturday, taking the total tally to 1,695,988, according to the federal health ministry's latest data.

This is the third consecutive day when fresh COVID-19 cases have increased by more than 50,000.

India on Friday extended the ban on international flights till Aug 31, said an official statement.

However, travel will take place under the "travel bubbles" which the country has created with some countries like Germany, the United States and France, added the statement.

A statement issued by the Director General of Civil Aviation (DGCA) said, "The government has decided to extend the suspension on the scheduled international commercial passenger services to/from India up to August 31.  However, the restriction shall not apply to international cargo operations, and flights specifically approved by the DGCA."

It further stated that to allow gradual movement of passenger traffic during the COVID-19 pandemic, transport bubble agreements have been signed with the United States, France and Germany.

A total of 183 COVID-19 cases were reported over the past 24 hours, bringing the national tally to 3,621, said Libya's National Center for Disease Control on Friday.

Up to 618 recoveries and 74 deaths from COVID-19 have so far been reported, the center said.

New Zealand reported two new cases of COVID-19 in managed isolation facilities on Saturday, said the Ministry of Health in a statement.

The new cases were females in their 20s and arrived from Pakistan via Dubai on July 27. They were in managed isolation facilities upon arrival and had been transferred to the quarantine facility in Auckland, said the ministry statement.

The total number of confirmed cases of COVID-19 in New Zealand was now 1,212, which was the number the country reported to the World Health Organization.

The total number of active cases in New Zealand's managed isolation and quarantine facilities was 22, unchanged from Friday, it is said, adding that there was currently no one receiving hospital-level care for COVID-19.

Meanwhile, 242 more recovered from the virus, bringing the total recoveries to 107,377, while the death toll increased by three to 174, according to a ministry statement quoted by QNA.

The ministry attributed the increase in coronavirus infections to gatherings and visits as well as ignoring the preventive measures such as staying at home and social distancing.

South Korea reported 31 more cases of the COVID-19 as of 0:00 am Saturday local time compared to 24 hours ago, raising the total number of infections to 14,336.

The daily caseload stayed above 30 for two straight days due to imported cases and small cluster infections.

Of the new cases, 23 were imported from overseas, lifting the combined figure to 2,419. The imported cases grew in double figures for 37 straight days since June 26.

No more death was confirmed, leaving the death toll at 301. The total fatality rate stood at 2.10 percent.

Singapore will provide an additional S$320 million (US$233 million) of support for firms in the construction, marine shipyard and process sectors, the government said Saturday. That’s on top of a S$1.36 billion aid package announced in June.

Under the new measures, the payment of foreign worker levies will be waived until September and then only gradually reintroduced.

More than a million Philippine doctors and nurses, saying the country was losing the fight against COVID-19, urged President Rodrigo Duterte on Saturday to reimpose strict lockdown in and around Manila.

In the largest call yet from medical experts to contain the virus, 80 groups representing 80,000 doctors and a million nurses, warned of a collapse of the healthcare system from soaring infections of the new coronavirus without tighter controls in the capital and nearby provinces.

The number of coronavirus disease (COVID-19) cases in the Philippines surged to 98,232 after the Department of Health (DOH) reported 4,963 new cases on Saturday, making a record daily increase for the third consecutive days.

The DOH said that the number of recoveries further rose to 65,265 after it reported 93 new recoveries.

The death toll also increased to 2,039 after 17 more patients died.

Healthcare workers, including microbiologists, infectious disease and public health experts, paediatricians and nurses, called for a two-week lockdown in the capital and provinces south of it until mid-August.

The capital region and nearby provinces account for two-thirds of the Philippine economy, among the fastest-growing in Asia before the pandemic.

The 61-year-old man died Friday afternoon at a hospital in Danang city, where Vietnam last week detected its first domestically transmitted coronavirus infections in more than three months, the ministry said in a statement.

The country, which has recorded 558 coronavirus infections since its first cases were detected in January, reported its first coronavirus death earlier on Friday.