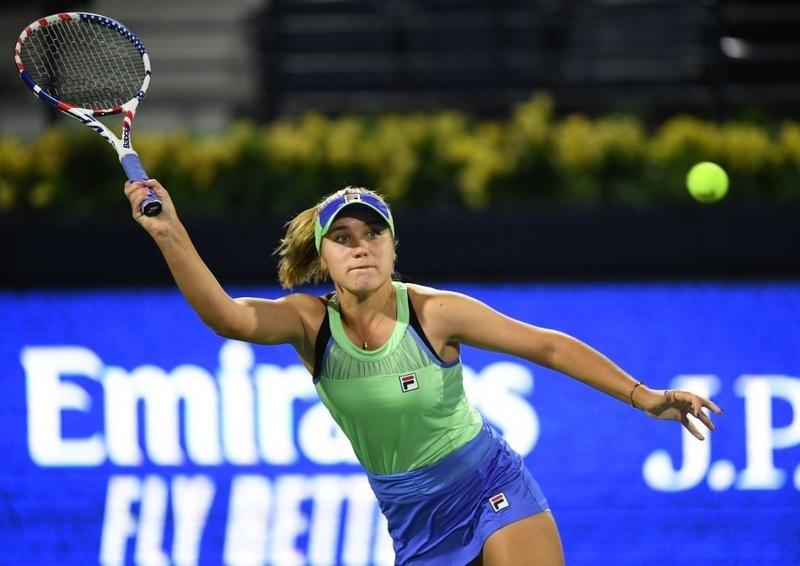 Sofia Kenin of the US returns the ball to Kazakhstan's Elena Rybakina during the WTA Dubai Duty Free Tennis Championship, at the Dubai Tennis Stadium in the United Arab Emirates, on Feb 18, 2020. (KARIM SAHIB / AFP)

MUMBAI - The COVID-19 shutdown could not have come at a worse time for Australian Open champion Sofia Kenin but the American says she has made full use of the mini off-season and is raring to go when the professional circuit restarts next month.

The 21-year-old lifted her first Grand Slam trophy in Melbourne at the start of the year and then added a WTA title in Lyon, days before the circuit came to a halt due to the novel coronavirus pandemic.

“I did not expect that, it was a huge shock,” Kenin said in a phone interview from the Greenbrier resort in West Virginia, where she is playing in the World TeamTennis event.

“I would say it was a disadvantage, because I was playing really well and I had a great two weeks and it was very memorable. So obviously it was very upsetting with what happened with this whole virus thing.

Kenin has signed up for the Western & Southern Open in New York, which was relocated from Cincinnati because of COVID-19, before the US Open starts on Aug 31

“I was just celebrating the moment after winning my first Grand Slam. I thought it was going to be about playing more tournaments, create more experiences, play lot more matches and see all my fans.”

The professional tours have been suspended for five months since early March but Kenin did not let it affect her mentally.

“I was working on different aspects of my game. My serve, getting more power in my shots,” the world number four said. “I’ve worked (hard) during this mini off-season, I would say. I have been practising every day.

Kenin has signed up for the Western & Southern Open in New York, which was relocated from Cincinnati because of COVID-19, before the US Open starts on Aug 31.

Australian world number one Barty has opted to skip the Grand Slam as she was not comfortable travelling to the United States amid the pandemic.

“I would love to play her again deep in tournaments. It’s unfortunate she can’t come,” Kenin said of Barty, whom she defeated in Melbourne in the semi-final.

Kenin has also kept herself match-fit, playing an exhibition event in the United States before making her debut this year in the WTT, which was one of only a few live sports events to welcome fans in North America amid the outbreak.

Her team, Philadelphia Freedoms, finished at the top of the regular standings with the semi-finals and final scheduled for the weekend.

At the WTT, Kenin also had the chance to rub shoulders with childhood idols Kim Clijsters and Venus Williams, with whom she has pictures as a small girl.

“It’s been a really good experience, the WTT. We are having good match play, a lot of competition,” Kenin said, adding that she felt safe with the strict health protocols in place.

“Definitely the match play is going to help me when the tour starts. It’s already over 10 matches I have played... it’s about feeling the pressure again and starting off strong.”