By Yang Feiyue in Beijing and Shi Ruipeng in Nanning 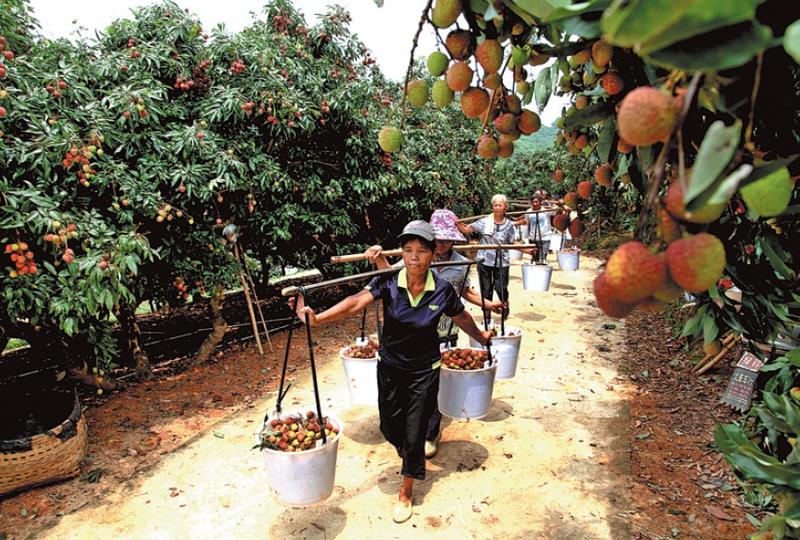 Farmers harvest litchi, hanging abundantly from trees, in Pubei county, Guangxi Zhuang autonomous region. The region has focused on the development of distinctive agriculture to improve conditions in its rural areas. (PHOTO PROVIDED TO CHINA DAILY)

Farmers were picking mulberry leaves in the field and feeding them to silkworms in Changda village, Guangxi's Qingxiu district in May. This was symbolic of the changes that have taken place.

"The land here was deserted in the past," says Fan Lichao, an official in the village.

I’m full of expectations about my new life in future. I know it takes persistent efforts to walk longer on the road toward prosperity

Nearly all the young people had left to work in the cities. Half of the village's farmland was unattended.

The local government began to develop mulberry trees and silkworm industries a few years ago to boost growth.

This resulted in a mulberry tree plantation, covering an area of 20 hectares, and 2,000-square-meter silkworm houses being built.

Rural residents can get land rent, and they have been encouraged to work at those facilities.

Liang is happy that she can work near her home, since she can take care of her children and the elderly at the same time.

A total of 16 rural households have engaged in the silk industry, and Fan says the local government plans to scale up the mulberry tree and silkworm facilities to involve more villagers.

In Jinhua town, about a 30-minute drive away, farmers are weeding and trimming the golden camellia trees. The town has evolved into a leisure agriculture demonstration zone.

It has helped more than 700 rural households increase income, including 50 poor families from Changda village. Each family has received 2,000 yuan annually in the past three years.

Guangxi has focused on the development of distinctive agriculture to improve conditions in its rural areas. So far, a novel agriculture management and technical support system has taken shape.

More than 7,000 modern distinctive agriculture demonstration facilities have been set up and are running across the region, according to the provincial Department of Agriculture and Rural Affairs.

A total of 220,000 poor rural households were engaged in the special industries by 2019.

In Shangdong village, Pingnan county of southeastern Guangxi, Pan Risheng has not just got back on his feet by growing Orah mandarin but picked up agriculture management skills that enabled him to become a farming leader among villagers.

Pan's family was already struggling to make ends meet in 2015 and things got worse when they had to pay for the medical costs after his father suffered a stroke in 2018.

Pan then approached the village government and found a job at the orange plantation, where the local authority was developing a digital orchard.

Trimming and watering trees, and taking care of fertilization and weeding have since been part of his daily routine.

In 2019, an Orah mandarin facility covering an area of more than 46.7 hectares was established. Every Orah mandarin tree carries a QR code that gives information on its age and fertilization date.

Pan then began to learn fruit cultivation from technicians and how to run the information management from planting to harvest and sales after he finished the field work. The orchard has introduced an advanced water and fertilizer irrigation system, whose operations are fully computerized.

Pan can now receive 3,000 yuan a month, which he says is way more than what he got doing farming work at home before.

After tasting the benefits, Pan took the initiative to encourage more local households to join the orchard. He also provided them with free plantation technique consultations.

The orchard produced 130,000 kilograms of oranges this year, and every household can get more than 20,000 yuan, says Pan Yanli, an official in Shangdong village.

At present, a tea-oil trees project is also under construction in the facility to make the best use of the land.

"I'm full of expectations about my new life in future," Pan Risheng says."I know it takes persistent efforts to walk longer on the road toward prosperity."