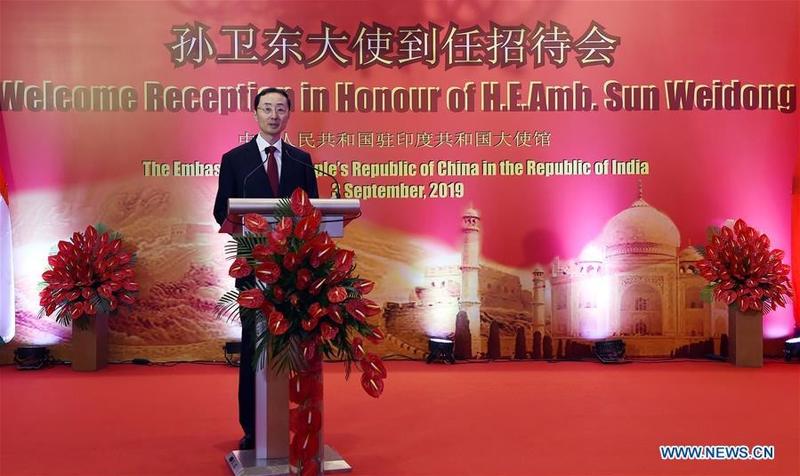 NEW DELHI - Chinese Ambassador to India Sun Weidong said on Thursday China's basic policy towards India remains unchanged, urging the two sides to work together to bring bilateral relations back on the track of sound and steady development.

Sun noted that in the current era, the basic national conditions of China and India as the two largest developing neighbors remain unchanged

At a webinar on "China-India Relations: The Way Forward " held by the Institute of Chinese Studies (ICS) based in New Delhi, Sun noted that in the current era, the basic national conditions of China and India as the two largest developing neighbors remain unchanged.

"These three 'unchanged' are our basic judgment of the current China-India relations," he said. "It is based on this judgment that China's basic policy towards India remains unchanged."

Both sides should grasp the fundamental interests of the two countries and their peoples, stick to friendly cooperation and properly handle differences to bring the bilateral relations back to the normal track, said the Chinese envoy.

Elaborating on several key issues on bilateral relations, Sun said firstly, China is committed to peaceful development, and it is not a "strategic threat" to India.

Secondly, China firmly upholds its sovereignty and will never engage in aggression or expansion, he said.

Sun said China-India relations today are hard-earned and should be cherished all the more.

Describing the bilateral relationship as "an exquisite craft glass," the ambassador said "so much effort and wisdom by a lot of people are needed to make this glass, but it will only take a few seconds to break it."

"China-India relation has reached a critical juncture now," he said. "A little carelessness may risk breaking the glass."

"At this moment, the two sides should handle the relations cautiously, calmly and rationally, conform to the international trend, always look forward and move forward, and resolutely avoid the whirlpool of suspicion and confrontation caused by miscalculation of the situation," he said.

The webinar, chaired by Ashok K. Kantha, ICS director and former Indian ambassador to China, was attended by about 200 senior diplomats, scholars and media representatives.