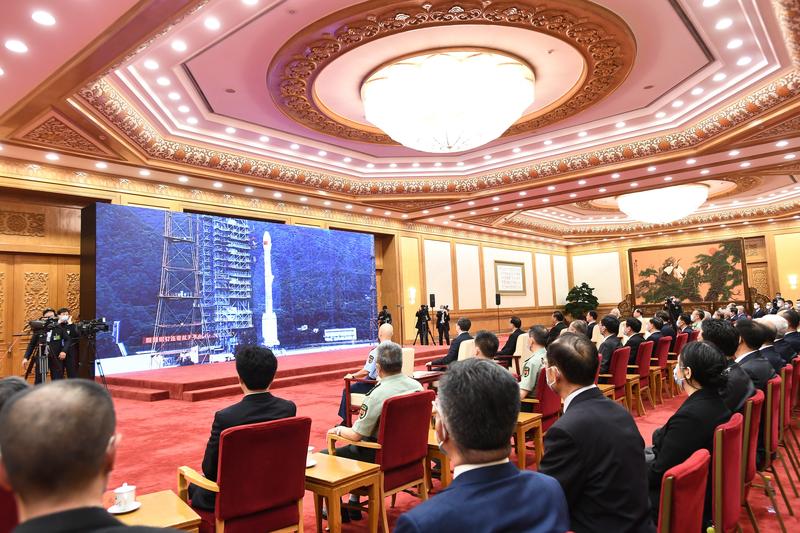 The completion and commissioning ceremony of the BeiDou Navigation Satellite System (BDS-3) is held at the Great Hall of the People in Beijing, capital of China, July 31, 2020. (PHOTO / XINHUA)

Xi, who is also general secretary of the Communist Party of China Central Committee and chairman of the Central Military Commission, declared the completion of the global navigation and positioning system's third-generation network at a ceremony at the Great Hall of the People in Beijing.

This is a new milestone in China's space industry and also a major achievement in the country's efforts to boost science, technology and innovation, experts have said.

Beidou is the country's largest space-based system and one of four global navigation networks, along with the United States' GPS, Russia's GLONASS and the European Union's Galileo.

More than 300,000 scientists, engineers and technicians from more than 400 domestic institutes, universities and enterprises have been involved in Beidou's development and construction. Dozens of distinguished scientists from the Chinese Academy of Sciences and the Chinese Academy of Engineering have taken part in the program, project leaders said.

In late June, the final satellite to complete Beidou's third-generation network was lifted by a Long March 3B carrier rocket at the Xichang Satellite Launch Center in Sichuan province and was placed into a geostationary orbit about 36,000 kilometers above the Earth.

After in-orbit tests over the past month, the satellite, the 59th in the Beidou family and 30th in the third-generation series, has recently started its formal operations, according to the China Satellite Navigation Office.

Since 2000, a total of 59 Beidou satellites, including the first four experimental ones, have been launched from Xichang on 44 Long March 3-series rockets, with some of them having retired.

Beidou began providing positioning, navigation, timing and messaging services to civilian users in China and other parts of the Asia-Pacific in December 2012. At the end of 2018, it started offering basic global services.

Now, there are 30 third-generation Beidou satellites in three types of orbit — 24 in medium-Earth orbits, three in inclined geosynchronous satellite orbits and three in geostationary orbits.

1989 -- The concept of the experimental system is demonstrated and verified by two Chinese communications satellites operating in orbit.

February 1994 -- The government approves and starts the research and development of a space-based navigation and positioning system, aiming to mitigate the country's heavy reliance on foreign networks. The system is named "Beidou".

December 2012 -- Beidou starts providing positioning, navigation, timing and messaging services to civilian users in China and other parts of the Asia-Pacific.