Mild or severe symptoms may persist among patients 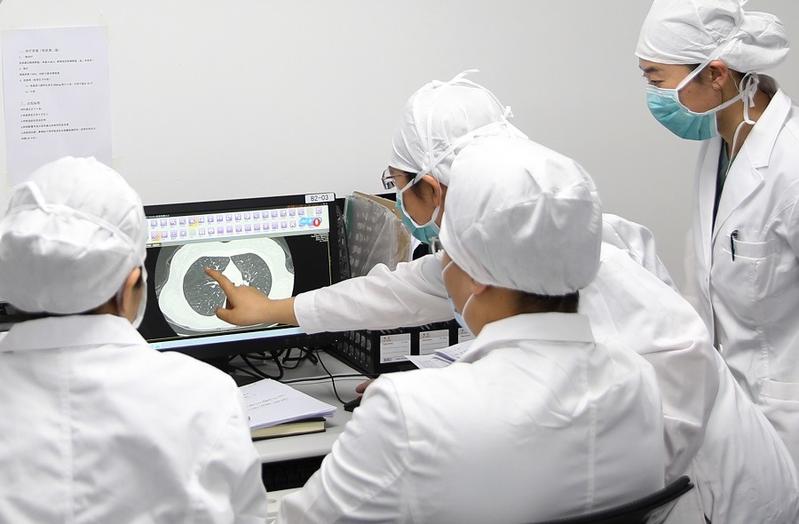 Doctors check a CT scan image of a COVID-19 patient at Xiaotangshan Hospital in Beijing, on March 30, 2020. (ZOU HONG / CHINADAILY)

As she left a hospital in Wuhan, Hubei province, on Feb 15, Ouyang Jianglin was struggling.

Recovering from a severe infection of COVID-19, she coughed and had to pause frequently on her way to a bus taking her home for a period of quarantine.

Before being hospitalized, the 67-year-old Wuhan native rarely exercised and had hypertension. In the hospital, she was on oxygen therapy and could swallow food only with a gulp of water, as she was too weak to swallow normally.

Her son, Ye Xianwei, said: "Surviving her ordeal knocked the wind out of her. She had a slight fever for a week after leaving the hospital, her stamina dropped noticeably and she often felt tired after doing daily tasks such as cooking."

The more encouraging a candidate drug is, the more careful doctors and public health officials should be when giving it to the public

Ye said that after five months in which his mother underwent two checkups, her health greatly improved, apart from occasional tightness in the chest. Computerized tomography scans also detected small hazy areas in her lungs.

"She still needs to stop frequently to catch her breath if she goes for a walk while wearing a face mask," Ye said. "Doctors said they don't recommend that she takes additional drugs, and have advised more rest. The good thing is that she does not have any scarring of the lungs, which is a serious condition."

Lung scarring, known as pulmonary fibrosis, is a chronic and progressive disease in which the air sacs of the lungs stiffen and become scarred, making it difficult to breathe. There is no cure, but the condition can be slowed via therapy, according to the British Lung Foundation.

Last month, a healthy woman in her 20s in the United States became severely infected with COVID-19, experiencing irreversible lung damage. She later became the country's first patient with the disease to undergo a successful double-lung transplant.

The case added fuel to the ongoing debate about the potential long-term effects of COVID-19. A considerable number of convalescents have reported prolonged symptoms, including coughing, fatigue and losing their senses of taste and smell, according to the World Health Organization.

The medical consensus worldwide is that it is still too early to talk about the long-term consequences of COVID-19, as the pandemic has been raging for less than a year and researchers are constantly learning about the coronavirus.

However, in recent weeks, researchers have begun to see ways in which mild or severe symptoms of the disease may persist among patients, both young and old. These include lasting damage to the lungs, the possibility of triggering diabetes, kidney and liver dysfunctions, and damage to the brain or nervous system.

However, only a limited amount of data, which is inconclusive, is available to medical professionals. As a result, scientists are calling for more vigilance and for research into whether such longterm symptoms are part of the recovery process or the disease itself. 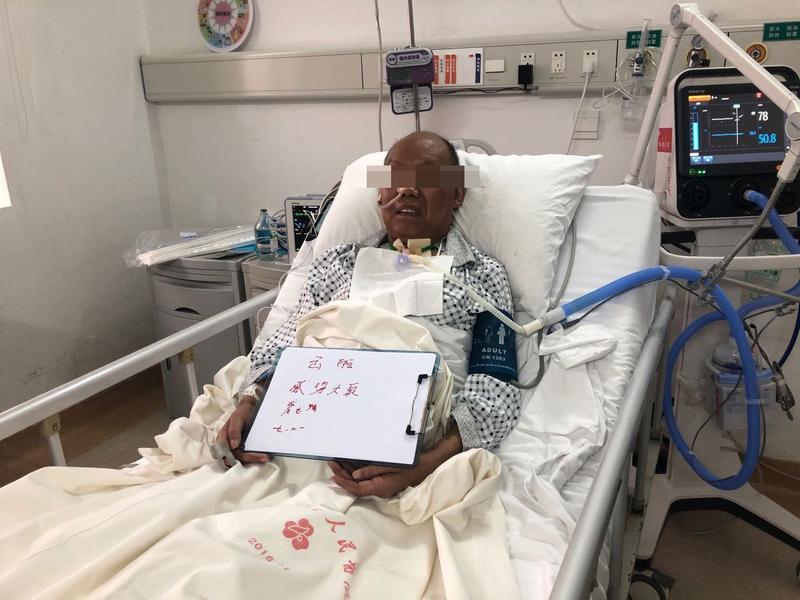 Cui Zhiqiang, a COVID-19 patient who recovered from the disease after receiving a double-lung transplant, was discharged from hospital in Wuhan, Hubei province, on July 21, 2020. (PHOTO PROVIDED TO CHINA DAILY)

According to experts, one of the reasons the long-term effects of COVID-19 are so hard to define is the disease's ability to infect a number of major organs, leading to a range of related symptoms.

The experts suggest that this might be partly due to the virus' ability to enter cells by binding to their ACE2 receptors, which are present in many parts of the body.

However, new research points to other receptors possibly acting as alternative routes into cells, according to a study published last month in the journal Stem Cell Reviews and Reports.

Moreover, COVID-19 infection alone usually isn't enough to kill a patient, said Rikard Holmdahl, a senior immunologist at the Karolinska Institute in Stockholm, Sweden. "The leading cause of death is the immune overreaction in the lungs," he said.

Holmdahl added that in some patients, especially severe cases, the body's immune system may go into overdrive and indiscriminately attack the virus and healthy cells in a potentially fatal condition known as a cytokine storm.

If such an attack occurs in the lungs, it will lead to a type of failure called acute respiratory distress syndrome, or ARDS, resulting in low blood oxygen levels in the body and a high chance of death, he said.

Zhang Jinsan, a medical and biology professor at Wenzhou Medical University in Zhejiang province, said once a cytokine storm occurs, it can create a "positive feedback loop" where the more cells the body's immune system destroys, the stronger the immune reaction becomes, damaging more cells in the process.

Due to the compound effects of a viral infection, overactive immune system and organ complications, Zhang said it is difficult to distinguish between the damage caused directly by the virus and that resulting from other complications. "Without knowing the cause of the symptoms, we can't say what issues will emerge, or the best way to tackle them," he added.

Shen Yong, a neurology professor at the University of Science and Technology of China in Hefei, Anhui province, said the coronavirus can attack cells lining the inside walls of blood vessels, which may lead to inflammation, blood clots and high blood pressure.

"I would not be surprised if the virus can cause neurodegenerative diseases by damaging blood vessels in the brain, but this hypothesis requires further research," he said.

This month, a study of 43 cases in the United Kingdom published in the journal Brain found that some COVID-19 patients may experience neurological damage such as strokes, inflammation of the brain and cognitive decline, raising the possibility of the virus having chronic neurological consequences.

Zhang said scientists still know surprisingly little about how the virus affects the body. "My advice for my children is to avoid becoming infected in the first place. There are simply too many unknowns surrounding this pathogen and its long-term effects. It is better to be safe than sorry," he added. 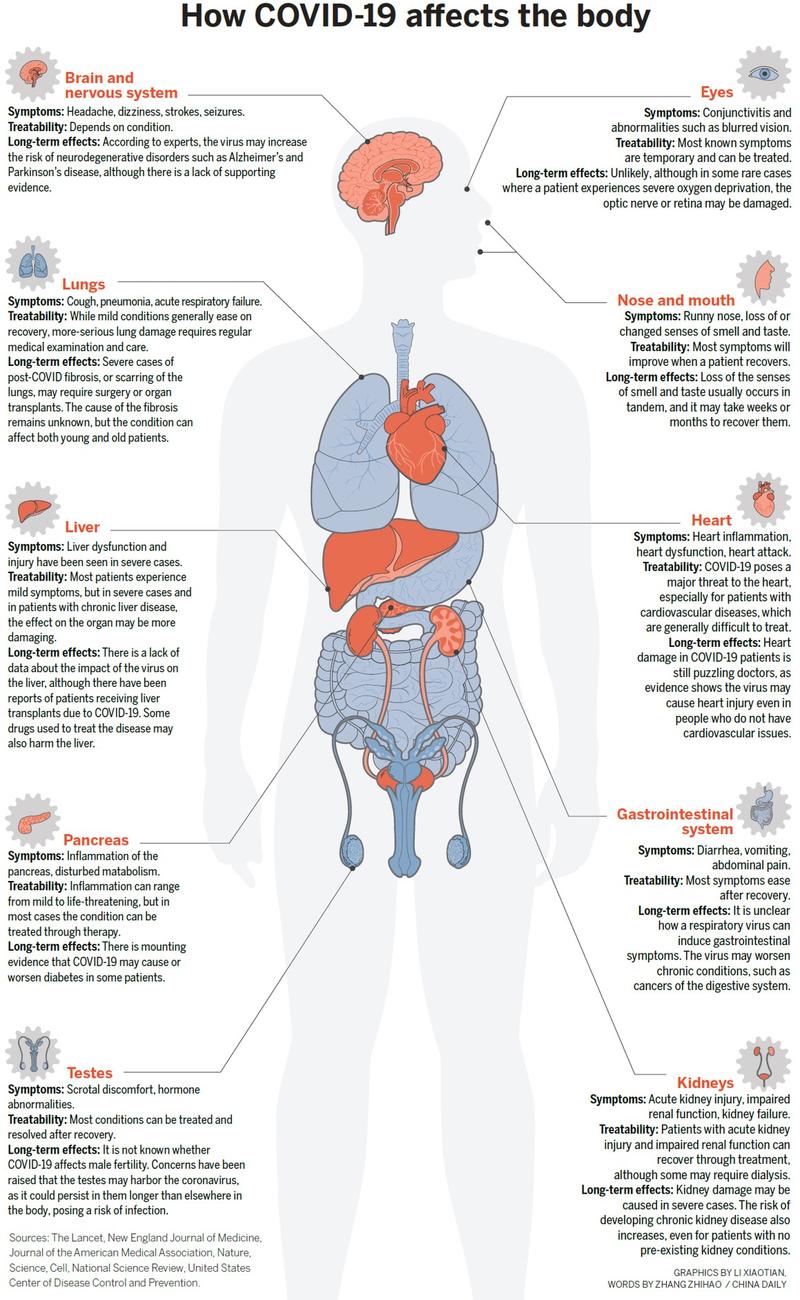 Yi Fan, a doctor from Wuhan, contracted the virus, which left his skin darkened, while treating patients at the start of the outbreak. He has been known fondly by netizens as the "dark-faced angel", although recent photos show that his skin color has much improved.

For his peers, Yi's case serves as a reminder that COVID-19 requires scrupulous care.

During a media briefing in May, Duan Jun, a senior intensive care physician at the China-Japan Friendship Hospital in Beijing, said the skin darkening was due to a combination of the antifungal drug Polymyxin B and liver damage, which caused iron to build up in the blood.

Mao Yonghui, a senior nephrologist at Beijing Hospital who treated severe cases of COVID-19 in Wuhan, said medical workers must take the adverse effects of medication into account, as many of the powerful drugs being used can damage the liver, kidneys and gastrointestinal system.

"Most of the drugs' side effects can be mitigated through careful use and meticulous monitoring," she said. "The long-term consequences of the virus are puzzling enough, so the last thing we want is for the treatment to have any long-lasting effects."

According to the World Health Organization, no effective drugs are currently available to combat COVID-19. However, some potential candidates have recently received a considerable amount of hype and endorsement from the media and politicians. These drugs include the experimental antiviral remdesivir and dexamethasone, a steroid.

The journal Science reported that the US government recently stockpiled enough supplies of remdesivir for three months. The UK and Japan have made dexamethasone part of the care for patients in critical condition after a preliminary study found that the steroid could reduce mortality by about one-third for those on ventilators, the report said.

However, Mao said an apparent lack of reporting on the adverse effects of the drugs, which can pose long-term health risks if not taken properly, remains a concern.

"The more encouraging a candidate drug is, the more careful doctors and public health officials should be when giving it to the public," she said. "But we know such rationality is in short supply, especially during a pandemic."

The adverse effects of remdesivir in treating COVID-19 remain unclear, as the drug is still being developed. However, evidence of risk to the liver and kidneys has been reported and is under intense scientific scrutiny, according to studies published in The Lancet and New England Journal of Medicine.

A Beijing orthopedist, speaking on condition of anonymity, said he was deeply concerned when the UK and Japan rushed to approve dexamethasone as a standard treatment for critically ill COVID-19 patients, based on early evidence.

"Dexamethasone, prednisone and methylprednisolone were among the corticosteroids (steroid hormones produced in the adrenal cortex or made synthetically) widely used by doctors during the SARS epidemic. High-dosage patients experienced bone tissue death, diabetes, psychosis and other chronic conditions," he said.

In January, a clinical guideline released by the WHO advised against the routine administering of corticosteroids to treat viral pneumonia and ARDS－two conditions caused by COVID-19. The advice was based on studies of the drugs' long-term side effects on SARS patients. However, the guideline also stressed that studies had notable design flaws and should be treated with a degree of skepticism.

The Beijing orthopedist said: "I believe that when pulling critically ill patients away from death's door, all options should be on the table, including dexamethasone, which is a cheap and accessible drug. The key is administering it with extreme care and caution."

In China, the national guideline on COVID-19 care states that patients can receive three to five days of treatment with corticosteroids based on their symptoms, but the daily dosage cannot exceed 1 milligram to 2 milligrams per kilogram of body weight. Meanwhile, the immunosuppressive effect and delayed viral clearance－the time in which a virus can no longer be detected in blood tests－caused by the steroids must be accounted for.

In an open letter published in The Lancet in late February, five Chinese doctors said the benefits and harm caused by using corticosteroids must be considered carefully. Dosage should be low-to-moderate, and the duration must be less than seven days.

The letter stated:"Corticosteroid treatment is a double-edged sword. We oppose the liberal use of corticosteroids and recommend short courses of those used prudently for critically ill patients with COVID-19." It added that further research is needed to "promote a more solid foundation for treatment recommendations".

Despite these warnings, the Beijing doctor said he feared that calls for caution could be ignored during the pandemic."Time and time again, we see early research claiming that some readily available drug is effective against COVID-19, but the next thing you know is that people are taking the drugs irresponsibly and suffering the consequences," he said.

"We have seen it with hydroxychloroquine (used to prevent and treat malaria), and now we may see it again with dexamethasone. However, the difference is that dexamethasone is relatively less-examined in treating COVID-19, and may pose serious long-term side effects.

"I hope history does not repeat itself. I certainly don't want to treat another patient with avascular necrosis (hip bone tissue death) because corticosteroids were overused to treat COVID-19."

Liu Kun in Wuhan contributed to this story.