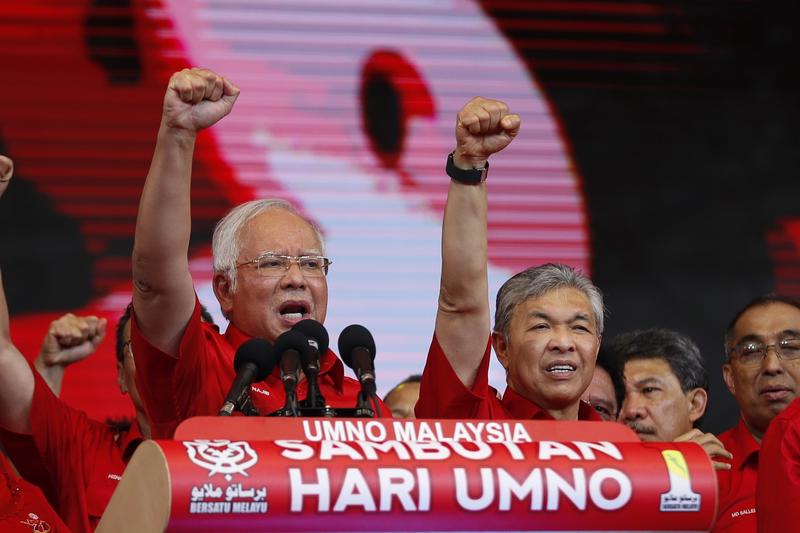 KUALA LUMPUR - The biggest party in Malaysia’s ruling coalition withdrew from a political alliance with the prime minister on Thursday, two days after its former leader and premier Najib Razak was sentenced to jail over the multi-billion dollar 1MDB scandal.

UMNO makes up the largest bloc in the coalition, which has only a two-seat pariliamentary majority.

UMNO president Ahmad Zahid Hamidi told a news conference the party would quit the Perikatan Nasional coalition and strengthen its partnership with the Islamic party PAS, also in the coalition.

When asked if the move was linked to Najib’s conviction, Ahmad Zahid told reporters it was “up to you to interpret”.

Political analysts said UMNO’s move made it easier to force elections, in which it might do better than in 2018, when it lost power amid anger over the scandal at state fund 1Malaysia Development Berhad (1MDB).

“They are no longer constrained within the coalition, which means the lawmakers can walk off at any time... the government could collapse at any time,” said Ibrahim Suffian of independent pollster Merdeka Center.

UMNO joined up with Muhyiddin’s Bersatu party and others five months ago after the collapse of the coalition that had ousted Najib on an anti-corruption platform.

Najib was sentenced to 12 years and a nearly US$50 million fine for abuse of power and found guilty of six other charges in the first of dozens of verdicts he faces. He denies wrongdoing and his punishments have been delayed pending appeal.

Aside from the cases, party members had become increasingly unhappy to play second fiddle despite being the biggest party in the coalition, a source close to the UMNO party leadership said.

UMNO leaders, including Najib, have been pushing for a snap election and believe they can win an election without Muhyiddin, political experts say.

“Muhyiddin’s position has been weakened. If we have an election, his party will most likely be wiped out,” said Oh Ei Sun, a senior fellow with Singapore’s Institute of International Affairs.

Separately Muhyiddin faces another test to his premiership. The opposition-run state of Sabah on Malaysian Borneo called on Thursday for a snap state election after attempts by the prime minister’s allies to win control.