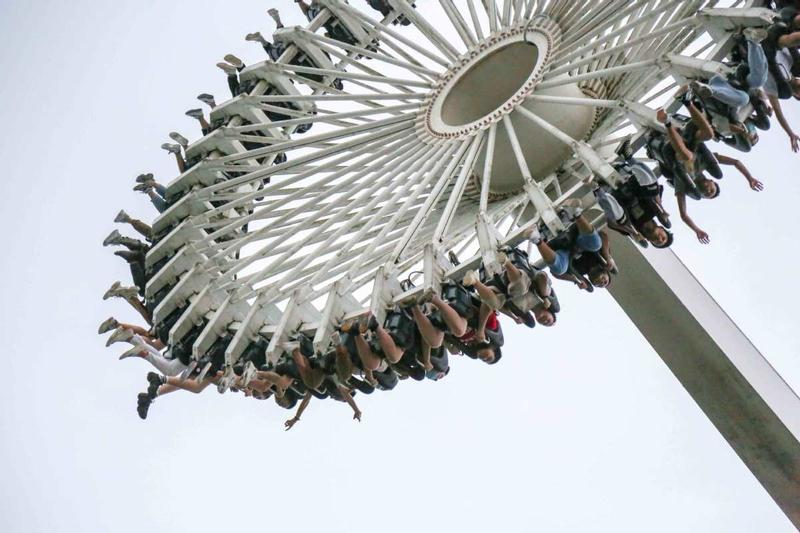 Tourists ride a big swing hammer at an amusement park in Shanghai this month. (PHOTO PROVIDED TO CHINA DAILY)

They are designed to bring happiness and excitement. However, they occasionally have accidents in which people lose their lives, are paralyzed or break bones.

They are expected to bring quick profits from low outlay, but some operators have been left with heavy financial burdens after paying large amounts of compensation in the wake of tragic accidents.

They are new recreational facilities, such as inflatable houses, bouncy castles and "air trampolines", whose numbers have risen nationwide in recent years in an increasingly wide range of styles.

Experts have said the rapid development of the recreational facility sector poses challenges for authorities. They need to ramp up supervision in an appropriate and timely manner to prevent accidents, especially minor ones, at facilities, many of which are not covered by national safety standards, laws or regulations.

The experts have also noted a lack of safety awareness among both operators and customers.

They added that although government supervision should focus on ensuring that operators adhere strictly to safety measures, customers also need to learn about potential problems because it will be almost impossible to avoid accidents if they ignore instructions intended to help minimize risks at such facilities.

Recently, the sector has made headlines as a result of accidents at venues across the country.

In a case that went viral on the internet, a candidate for a master's in medical sciences was left as a wheelchair user after she was "catapulted" from a 2-meter-deep inflatable trampoline fitted with a jump air pillow bag.

In May, the student－known only as "Qiqi"－from Xuzhou, Jiangsu province, visited the venue with her cousin and boyfriend. The object of the attraction, called "The Human Body Bomb", is for players to be launched into the air as their companions jump from an elevated position and land on the taut surface.

However, as the two men landed, Qiqi was "blasted off" as if she were doing a backward somersault, as an online video shows.

Although Qiqi landed in an enclosure full of soft, air-filled plastic balls, she hit them headfirst, and quickly realized she could not move.

After being rushed to a hospital, Qiqi was diagnosed with paraplegia, meaning she had lost all sensation and control of the motor functions in her lower body. 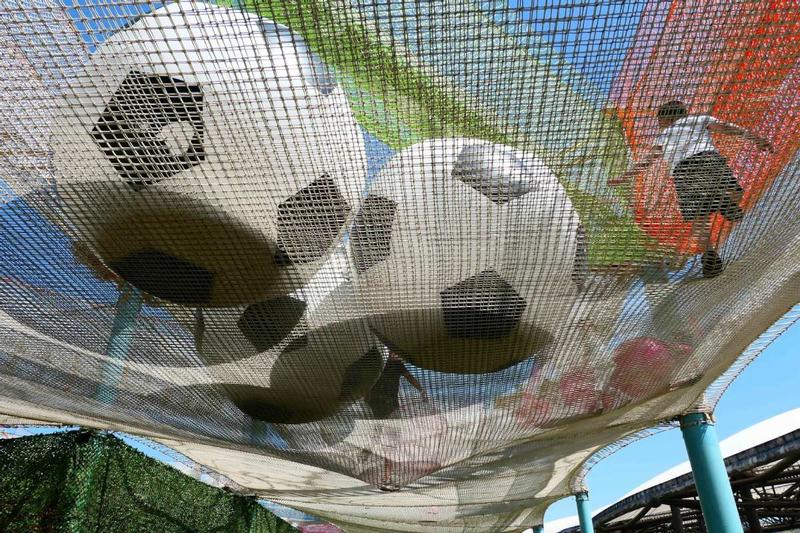 Children play on a trampoline in Beijing in May. (HE LUQI / FOR CHINA DAILY)

While the local government quickly established a special team to investigate the accident, there is no indication how it will be handled, which is a typical loophole in regulation of the sector, experts said.

Before they entered the trampoline venue, the three friends were asked to sign a disclaimer in the event of injury. They didn't read the document, and workers at the venue didn't explain any of the details in the disclaimer, which Qiqi signed on behalf of all three members of her party, according to media reports.

There is a warning sign in the facility, reminding users that they must follow the instructions of staff members, remove all jewelry and other accessories and warm up before using the equipment.

However, quoting a national standard for gymnasiums and sports grounds, Guo Fanglai, a police officer involved in the investigation, said the workers responsible for the equipment did not have the legally required qualifications.

"The venue has a business license, and the attraction had passed all relevant quality tests," Guo told China Central Television.

The investigating team said that in China there are no laws or regulations to determine whether inflatable attractions that are popular with regular customers, not professional sportspeople, should be classified as gyms or sports venues.

A male executive at the venue, surnamed Yang, said the employees had received three days' tuition from trainers dispatched by the manufacturer, but the venue owners had no idea where they could obtain the relevant qualification certificates.

Li Meng, a tourism industry researcher with the Shanghai Academy, a government think tank, said the accident offered a microcosm of the problems in the recreational facility sector, which "has flourished in recent years" because of the low entry threshold for operators.

Such businesses can be opened anywhere there is enough space to accommodate the facilities. "Quick profits can easily be made," Li said, adding that the venues are popular because they cater to a rising interest in action games and activities.

Despite the sector's growing popularity, government supervision has failed to keep up with its rapid development, and venues constantly introduce new equipment to widen the range of attractions, he said. 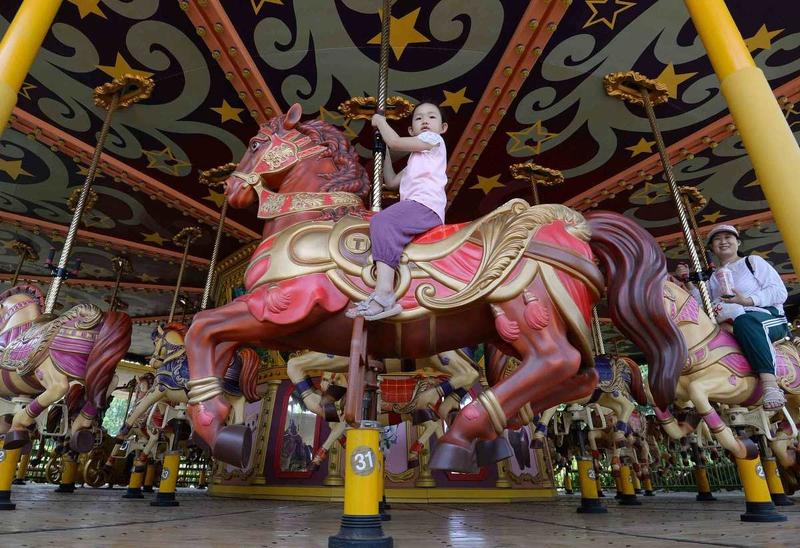 A girl and her mother ride a carousel in Handan, Hebei province, in June. (HAO QUNYING / FOR CHINA DAILY)

In China, recreational attractions that can move at a speed of 2 meters per second or faster, and those that operate at a height of 2 meters above ground level, fall into the category of "special equipment" if they are used for commercial purposes.

They are subject to the same strict government supervision as industrial pipelines and other major items of infrastructure.

Li said that while big facilities are managed well, there are some problems with supervision of smaller venues.

"Many smaller facilities are poorly regulated, and it may be unclear which national standard they should comply with. As a result, they are not really subject to safety supervision," he said.

He added that while it is normal for government supervision to lag sometimes, it is essential that authorities impose temporary measures to address safety hazards in the sector.

One viable solution would be to make the current standards, laws and regulations inclusive enough to cover emerging recreational facilities.

In this way, no matter how rapid the market development, there would be a base level that would allow the relevant authorities to fulfill their supervisory duties, Li said.

He called for improved coordination of different government bodies to supervise the sector.

Currently, in addition to the emergency management authority, which oversees safety management, and the administration for market regulation, which is responsible for quality control at venues, the culture and tourism authority is involved in supervision of the sector, which is considered part of the tourism industry, he said.

Unfortunately, the three bodies don't cooperate well in supervising the sector in many areas of the country, he added. 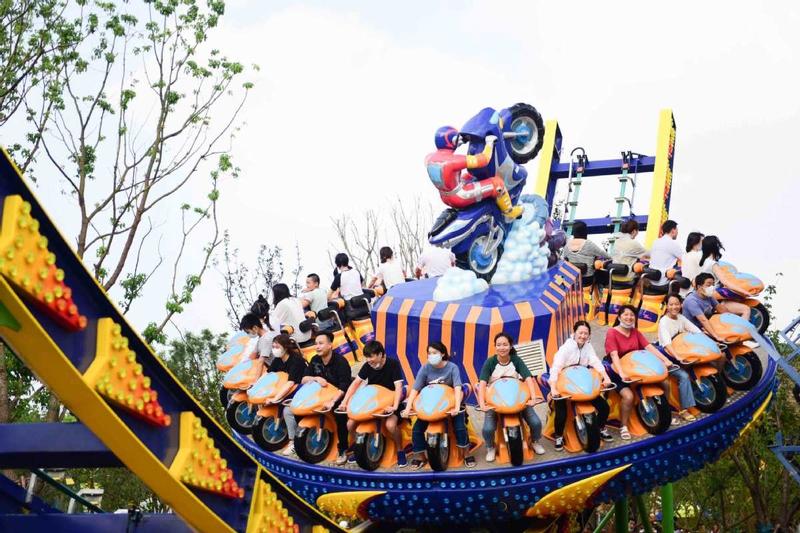 The national authorities have attempted to close the loopholes.

For example, in late 2018, the State Administration for Market Regulation issued a special safety specification to address the high number of accidents at such venues, which are popular with children.

The specification came into effect on July 1 last year.

Zhang Yong, an expert with the national technical committee on the standardization of ropeway and recreational facilities, told industry newspaper China Quality Daily that safety is a red line that must never be crossed in the management of recreational facilities, and national standards will help to regulate the development of the sector, guide improvements and ensure safety.

"In recent years, as inflatable recreational attractions have become bigger in size, which has been a trend in the sector, the risks have also increased sharply," he said.

Reducing susceptibility to strong winds is key for such facilities.

In March 2016, for example, a strong wind carried an inflatable attraction 100 meters in Zhengzhou, Henan's capital, resulting in one child being killed and 39 injured.

While introducing strict standards to fix these attractions, the specification also included emergency response measures, set height limits for customers and specified the maximum number of people allowed to use such attractions at the same time.

The entry threshold for manufacturers of inflatable recreational facilities used to be low, but the specification promoted regulated sectoral development, Zhang said.

Meanwhile, in September, the Work Safety Committee of the State Council, China's Cabinet, published a circular that further clarified the duties of different government bodies in the management of recreational facilities and demanded concerted efforts and joint law enforcement to ensure safety.

It also ordered different government bodies to jointly punish venues where serious accidents have occurred as a result of human failure and those that have failed to rectify faulty equipment.

The move is aimed at increasing the cost of violation, it said. 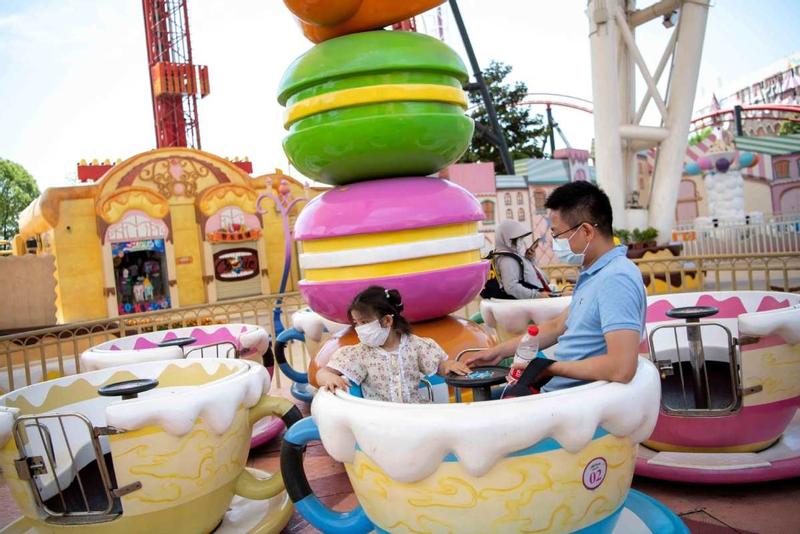 A father and daughter take a Tilt-A-Whirl ride in Wuhan, Hubei province, in May, after the amusement park resumed operations following the easing of a citywide lockdown in response to the COVID-19 pandemic. (XIONG QI / XINHUA)

Zhang Min, a lawyer with the Anhui Pinhan Law Office in Hefei, capital of Anhui province, has been following cases related to recreational facilities for several years.

He said operators have a legal obligation to adhere to safety standards, or they will bear legal liability for any accidents that occur.

In some cases, operators have asked customers to sign documents absolving the venue of liability, but "such disclaimers are legally invalid", Zhang Min said.

Under Tort Liability Law and judicial interpretations of personal injury compensation by the Supreme People's Court, if victims of accidents at recreational facilities can prove that the operators failed to honor their safety responsibilities, the owners will have to pay compensation, he noted.

Venue operators must provide customers with both written and oral warnings of the risks, he added.

However, quoting certain other laws, including the General Principles of the Civil Law, he said operators will bear lower legal liability if they can prove that customers also made mistakes that resulted in accidents.

Generally, the laws are more favorable to customers, who are considered more vulnerable, he added.

Though some customers are to blame for accidents due to a lack of safety awareness, Zhang Min called on authorities to roll out more measures to improve venue supervision.

"It's almost impossible for authorities to regulate players, but the venues for recreational facilities are usually in fixed locations, so measures introduced to improve supervision are often more effective," he said.

There have been many cases in which venue operators have been ordered to bear the main responsibility for accidents, which could be a good lesson to remind such businesses to improve their safety management awareness. If not for such cases, operators might never read relevant rulings or examine cases, he said.

For example, a local court ordered the operator of an inflatable trampoline in Yucheng county, Henan province, to pay more than 300,000 yuan (US$42,960) compensation to the family of a boy who was killed when the attraction was blown over by strong winds.

"This could be a pertinent solution to address low safety management awareness in the sector and further help to prevent accidents," he said.