Hajj pilgrimage in the age of coronavirus is unlike any before 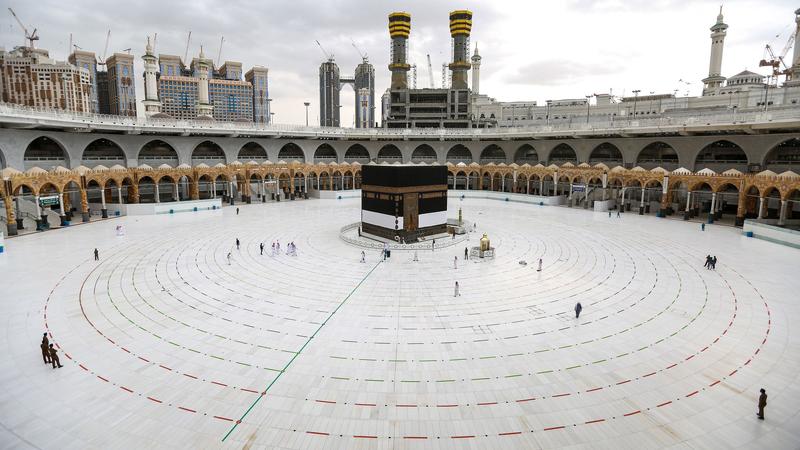 Social distancing markers surround the Kaaba, Islam's holiest shrine, at the center of the Grand Mosque in Mecca, ahead of the annual Muslim Hajj pilgrimage, on July 28, 2020. (PHOTO / AFP / GETTY IMAGES / BLOOMBERG)

Holy water will be consumed from single-use bottles. Pilgrims will get sterilized pebbles to throw at pillars symbolizing the devil. And instead of jostling shoulder to shoulder, worshipers will circle Mecca’s grand mosque with 1.5 meters of space between them.

Normally, religious tourism -- of which hajj is only a part -- brings in revenue equivalent to about 2.7% of Saudi Arabia’s gross domestic product

This year, Islam’s annual hajj pilgrimage — which starts on Wednesday — will be unlike any other.

Saudi Arabia has dramatically downsized the ritual because of the coronavirus pandemic, with authorities testing pilgrims and cutting their numbers from the usual 2 million to around 1,000. As a result, this year’s pilgrims will be among a lucky few, selected through an online vetting system open only to residents of the kingdom.

“It’s such beautiful moment for me,” said Faridah Binti Bakti Yahra, a 39-year-old Indonesian mother of three, who was so surprised by the call telling her she’d been chosen that she thought it was a scam. “I couldn’t believe it was true.”

Hajj is one of the five pillars of Islam, obligatory once in a lifetime for all who are able. Pilgrims often save money for years and apply repeatedly for a spot.

Normally, religious tourism -- of which hajj is only a part -- brings in revenue equivalent to about 2.7 percent of Saudi Arabia’s gross domestic product. But the crowds of people from all over the world are also potential incubators of disease, so the government halted them at the start of the pandemic. Saudi Arabia’s coronavirus cases topped 270,000 this week, with daily new cases falling below 2,000 for the first time since early June.

“The main goal is that the pilgrims not be infected,” hajj minister Mohammad Benten said in an interview with Saudi television channel Al-Arabiya.

The hajj will be the first large-scale gathering in Mecca’s grand mosque in months. Only pilgrims between the age of 20 and 50 without chronic diseases were considered. Before traveling to Mecca, they observed a week-long home quarantine, followed by a four-day quarantine in a Mecca hotel -- receiving meals through room service and communicating with their neighbors over Whatsapp.

When they leave their rooms on Wednesday, they’ll be transported on half-empty buses, their possessions packed in identical navy blue suitcases. Usually, as part of the ritual, they would gather rocks to throw at three stone pillars -- a symbolic repelling of evil -- but this year, each pilgrim will be given a packet of sterilized pebbles.

They’re also wearing movement-tracking bracelets that connect to their phones via Bluetooth. Yahra laughed as she showed the white band on her wrist during a video call arranged by Saudi authorities; this year, pilgrims are only allowed to communicate with international media through government intermediaries.

More than 160 nationalities will be represented this year, with 30 percent Saudi and 70 percent foreign. Their costs are covered by the government.

Other pilgrims interviewed by Bloomberg asked not to be identified by their full names because of the rules about speaking to media.

Alfayik, a 26-year-old student from the Central African Republic, was so shocked he’d been chosen that he started “jumping and screaming.” He’d been applying for five years.

READ MORE: Over 2 million Muslims in Mecca for start of hajj pilgrimage

For Yahra, it’s particularly bittersweet. After spending a year and a half in Saudi Arabia, her family will return to Indonesia as soon as she finishes the hajj. Like many others during the economic downturn that’s accompanied the pandemic, her husband lost his job at an oilfield services company. The movers have already come to gather their belongings.

In addition to supplications she’ll make on behalf of friends and family, she has prayers of her own: for the pandemic to end, for her daughters to have a good future, for her husband to find work again.

“I feel like it’s a blessing for me before I leave Saudi for good,” she said of the pilgrimage. “It’s difficult for us.”