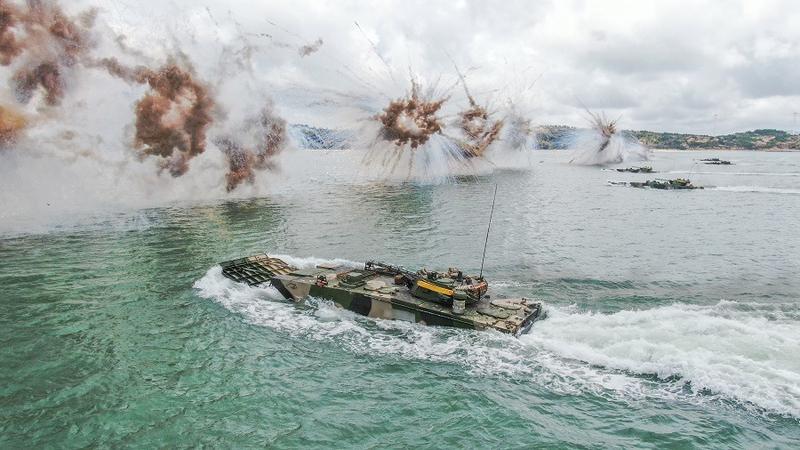 The Sixth Company of the 74th Army Group of the People's Liberation Army is known as the "hard-boned Sixth Company".

The nickname was bestowed on the company because its 80-plus year history has seen it produce many heroes who fought bravely and made the ultimate sacrifice.

Even in today's peaceful times, the officers and other ranks live by the spirit of the hardships endured by their predecessors and continue to forge a "hard-boned" company.

For example, in 2013, squad leader Yang Shulin fell from a 5-meter-high ladder during an exercise and smashed his right arm against a rock.

Instead of quitting, Yang switched his firearm to his left hand, gritted his teeth and completed the moves fluently before consulting a medic. He was diagnosed with a comminuted fracture, meaning the bone had broken into several fragments.

More recently, Zhao Song, the company commander, had a 3-centimeter-long steel pin implanted in his left wrist after a fall during a training session. He now regards the pin as a part of his body.

In 2018, the 31-year-old captain from Hebei province was demonstrating a rope-climbing move to his troops when he grabbed the rope with one hand and turned to face them. However, rainfall had made the rope very slippery. Zhao fell from a height of 4 meters and used his left hand to try to break his fall. The impact broke his wrist, which was subsequently encased in plaster. 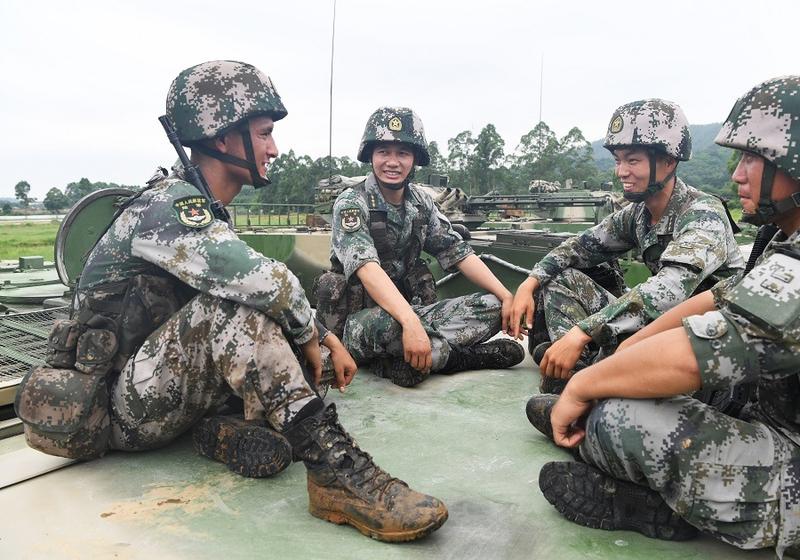 When the plaster was removed, Zhao was told that his wrist would have to remain in tight bandages for three months. Unable to stand the restriction to his movement, he removed the bandages before the appointed date and immediately started training again.

A few months later, the brigade issued a notice asking for volunteers for physical fitness assessments. Zhao signed up without hesitation, despite many colleagues attempting to dissuade him. He then devised a rigorous personal training plan that involved running 45 kilometers a week and doing at least 100 pullups every day.

At first, he could only raise a 0.5 kilogram dumbbell with his injured arm, but after practicing for some time, he began to do pullups on a horizontal bar. Fearing that his arm would ache during exercise, he bound it in a resistance band and wrapped his left wrist in a tight bandage to prevent the steel pin from moving during long-distance runs.

In the end, he not only passed the assessment, but also became the first member of the brigade to be classified as achieving a very high level of fitness.

This harsh training routine has become a habit. Every morning, Zhao gets up an hour before his comrades so he can run 8 km and complete 200 pullups with a 15 kg weight tied around his waist.

Although the steel pin prevents him from bending his wrist as freely as he would wish, he has accepted the fact and calls himself "the running steel wrist" on his social media account.

"Actually, I feel my bones have become harder since the injury," he said.

When he joined the company in 2008, Zhao's fitness level was assessed as one of the poorest in the squad even though he stood 190 centimeters tall and weighed 70 kg.

However, after his squad leader related many stories of heroism and spoke about the company's honored history, Zhao began to better understand the spirit the company has revered throughout the years.

He was also impressed by his comrades' determination and perseverance. In response, he pushed himself to train harder and harder and become the best of the best. 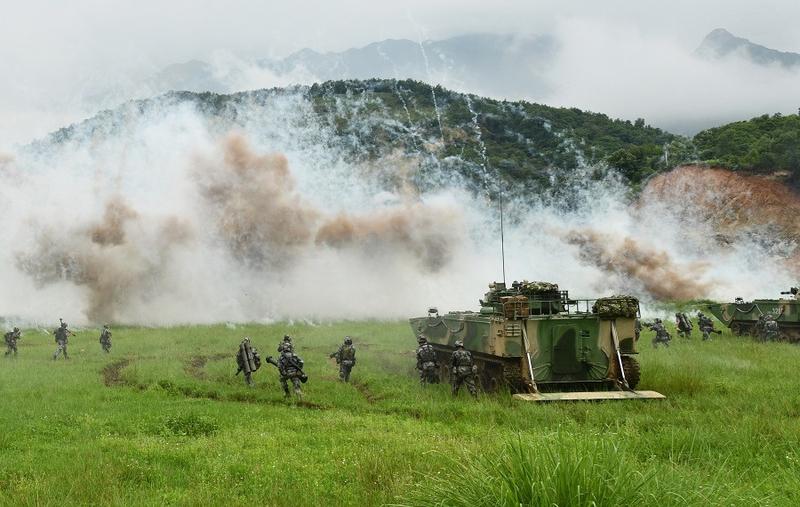 The company was formed in Hebei province in March 1939, and initially it comprised 14 soldiers from the Red Army. Since then, it has taken part in 161 battles in several conflicts, including the Chinese People's War of Resistance Against Japanese Aggression (1931-45), the War of Liberation (1946-49) and the War to Resist United States' Aggression and Aid Korea (1950-53).

Despite that, Chen Feng wasn't overly impressed by the honors when he joined the company in 2017. "They were just words and numbers, after all. To me, it was more like, 'OK, so this is our company's history'. Nothing more," he recalled.

At the time, the company had just moved its base from Hangzhou, capital of Zhejiang province, to Huizhou, Guangdong province. Only later, when a new history exhibition hall was built, did Chen begin to feel differently and change his view.

At the entrance of the hall sits a sculpture made from 161 bullet cases and artillery shells, which represent the 161 battles in which the company has fought.

The hall is also home to a bayonet that was wielded by war hero Liu Sihu, who single-handedly fought off a dozen enemy soldiers during a siege in 1948. The bayonet's rusty tip is slightly bent as a result of the number of times Liu stabbed his opponents.

A large painting hangs on a wall, displaying a cruel battle in 1948 during the War of Liberation, when 127 of the company's soldiers sacrificed their lives, leaving just 13 men to defend the base until victory was assured.

"I was deeply touched when I came here and saw these heroic scenes," said Chen, who comes from a wealthy family in Dongguan, Guangdong province. His father, who owns a machinery company, wanted Chen to gain some life experience by serving in the military for two years and then return home.

"I had some knowledge about the military. I knew life here could be very difficult, but it was much harder than I had expected," Chen said.

He had thought a pass in all subjects would be sufficient, but his squad leader demanded outright excellence.

"He always told us that excellent results are just the starting point, and only breaking records counted. There is no peak－just keep going upward, so the training can only become harder and harder," he said.

Accustomed to a comfortable urban life, Chen was daunted by the intensity of the training. He wanted to quit training, but his squad leader, Lin Xinxiang, told him: "If you can't endure the hardship, then don't stay in the sixth company. No soldier in the sixth company is unable to bear this hardship."

Chen said: "I was greatly touched by his words. I felt that I had joined this heroic company, so I should fight for more honor instead of lagging behind."

He set himself small goals, such as trying to overtake the person in front of him during runs. Every time, he ran harder and faster to overtake the runner at the front, and eventually he led the pack.

Last year, his progress earned him a potential spot to represent the company in a parade at Tian'anmen Square to celebrate the 70th anniversary of the founding of the People's Republic of China.

As a soldier with zero experience of formation training and daunted by the high rate of elimination, Chen trained even harder. "I never thought I could endure that much hardship," he said. His efforts ensured he won a coveted spot and was part of the parade. 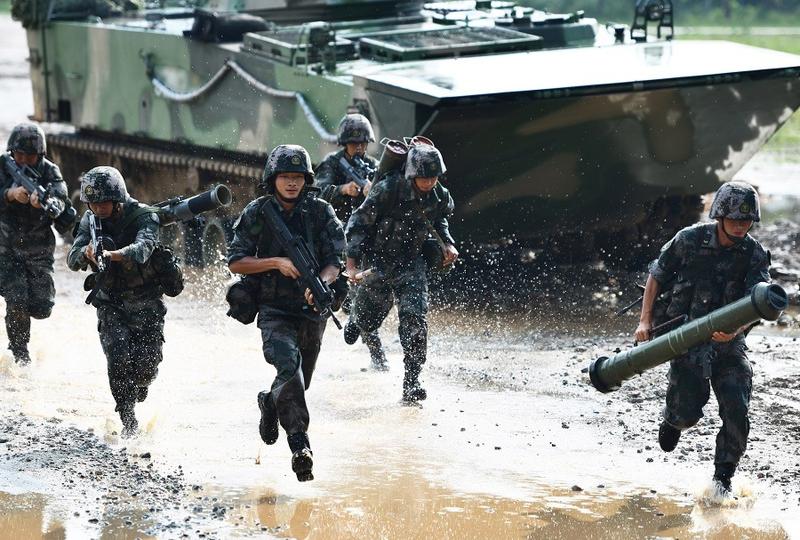 Soldiers from the unit, aka the "hard-boned company", land on a beach during an exercise. (ZHANG YONGJIN / FOR CHINA DAILY)

Chen said the company has three driving forces: the mentality to defeat all enemies; the tenacity to deal with all obstacles; and the stamina to stick things out until the very end. In the past, these attributes were manifested on the battlefield, but today they are integrated into daily training drills, contests and each soldier's will to surpass expectations.

In 2017, the company was invited to join the Lingnan Top Soldier competition, a military contest covering the Army Group in Lingnan (which encompasses the provinces of Guangdong and Hainan, plus the Guangxi Zhuang autonomous region).

Having just settled in Guangdong, the company was the underdog and faced unfamiliar activities, opponents, terrain and climate.

Wang Yicun, a squad leader, said the only way to win the games would be to train around the clock.

Every day, the soldiers got up at 5am and ran for 3 km. During the day, each soldier carried a 25-kg rucksack and did cross-country runs of 8 to 15 km along unfamiliar routes, and then ran 10 km fully armed before doing strength training in the evenings.

In 2018, Wang Donglin, one of the company's squad leaders, won through several tough selection rounds to compete in the Safe Environment competition at the International Army Games in Russia.

The Safe Environment competition is highly technical and involves radiation and chemical defense, so seven of the nine participants were members of a chemical defense brigade. The 25-year-old Wang Donlin, a member of an infantry regiment, was one of only two nonspecialists selected.

Though he had a fragment of loose cartilage in his right knee, Wang Donlin chose to cover up the condition during training, simply pressing the cartilage back into position every time it protruded.

Many examples of such endurance abound in the company's history. Although it has been many decades since it has been involved in combat, the officers and soldiers are like arrows on bowstrings, ready to shoot at any time.

Rucksacks sit on every bed in the dormitory at all times. Each contains essential materials for field operations, so the soldiers are ready to set out at a moment's notice.

To encourage the soldiers to inherit the fighting spirit of their predecessors, each squad and platoon is named after a war hero.

Lin Kang, a 28-year-old squad leader who has served in the PLA for 10 years, said life in the company can be tough, but the physical hardship is similar to that in any other company. Instead, the pressure comes from being a member of such an exulted unit and the weight of expectation associated with that status.

"Wherever we are deployed people expect more from us because we are from the sixth company. That means our standards must be higher and we must appear straighter, more forceful and energetic," he said.

"We subconsciously force ourselves to meet all expectations."