A full life at home 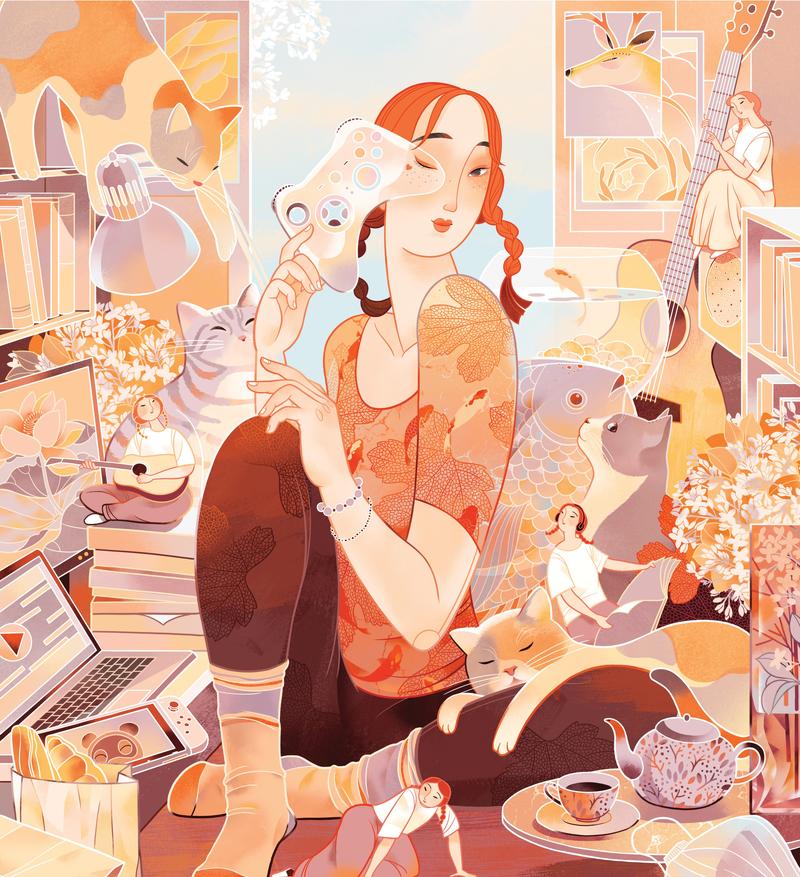 As governments worldwide impose lockdowns in an attempt to contain COVID-19, life indoors has become a “new normal” in many countries, including China.

An increasing number of people have decided to stay at home to pursue hobbies with a determination bordering on obsession.

However, Song Laixin, a graphic designer in Beijing, was well accustomed to such a lifestyle long before the coronavirus pandemic emerged.

The 27-year-old describes herself as an otaku — distinguishing herself from others, particularly those who love being outdoors.

The Japanese word refers to people who become engrossed in hobbies, particularly anime and manga. The former is a style of Japanese film and television animation, while manga refers to Japanese comic books and graphic novels, typically aimed at adults as well as children.

Most otaku are millennials, who become obsessed with a particular aspect of popular culture to the detriment of their social skills. As a result, the term has also become synonymous with the word homebody, used to describe someone who prefers to stay at home for long periods and refuses to go out.

“As an otaku, staying at home is normal for me,” Song said, adding that the most important quality in living such a lifestyle is to spend as much time at home as possible to enjoy being alone and socially isolated.

Many people would shy away from the thought of being holed up at home for months on end, not even going out to shop for groceries or attend a family event, but Song is among the millions of otaku who revel in solitude.

“The longest I’ve ever stayed at home was three months — and that was before the COVID-19 outbreak,” she said.

“When I feel hungry, I just go to the delivery app on my phone. Sometimes, I suddenly decide to cook, but I order the ingredients online.

“I do not have fixed hours, so I usually work three to five hours a day when I have a project to complete. When I don’t have any work, I watch a movie or TV show, or just lie down and do nothing, apart from enjoy being home alone.

“In today’s world, which is so technologically advanced, you can easily function without ever leaving home.”

For Song, home is not only a place to eat and rest, but also her office and entertainment venue.

She said it has been difficult for her family and friends to understand the lifestyle she has chosen.

“My friends, who know that I prefer to stay at home chatting with them by instant messenger rather than going out, have gradually stopped inviting me to social activities,” she said.

Song added that some of her friends started to become curious about her lifestyle during the pandemic. They wanted to know how otaku entertain themselves at home for long periods without getting bored.

“Self-quarantining gives you so many choices. I tell my friends they can go fishing in their fish tanks, complete a jigsaw puzzle, learn a language or computer programming, do yoga and meditate,” Song said.

“Being at home doesn’t mean we are uninterested in the world, as we have our own hobbies and interests. However, we are not usually interested in aimless social interaction and don’t want to waste our time casually chatting with others.”

During the pandemic, many people have found it easy to live solitary lifestyles, as social distancing is practiced to contain COVID-19. 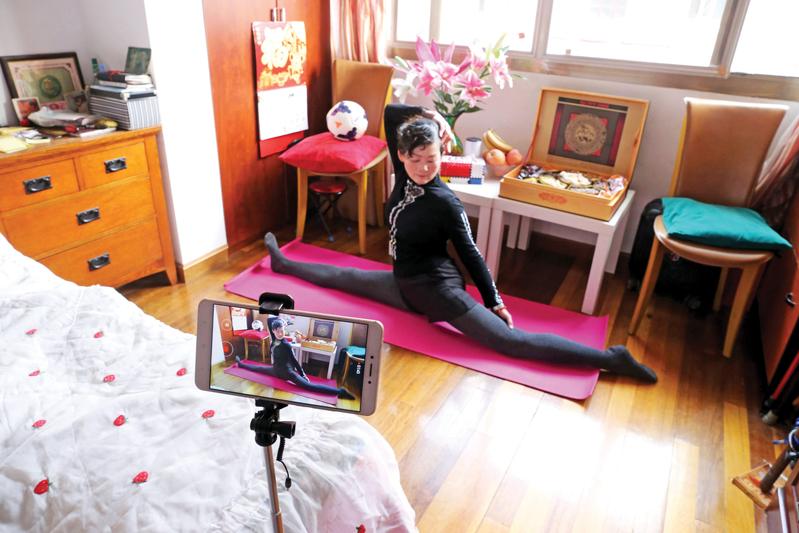 A 63-year-old shares her indoor exercise sessions on the internet. (CHEN YUYU / FOR CHINA DAILY)

Millennials — adults in their 20s and 30s —who have been under lockdowns in major cities worldwide including Beijing, Tokyo and New York, face the prospect of further isolation after the outbreak, but experts said this generation is best-prepared for such hardships.

In the 1980s, many young people in the United Kingdom were known as “couch potatoes”, as all they did after work was lie on a sofa, eat junk food and watch TV. More than 30 years later, a new generation still finds it hard to get off the couch, and even out of the house, despite being aware of the health risks posed by leading a sedentary lifestyle.

In Italy, such people are known as pantofolalo, the Italian word for slippers. A media survey in the country found that 57 percent of Italians prefer to stay at home reading, cooking, surfing the internet, watching TV, or even exercising.

In South Korea, more people — young and old — are taking to life at home.

In late 2016, a report by the South Korean Ministry of Culture, Sports and Tourism showed output in the country’s cultural content industry that year reached US$3 billion. The online games industry, which is highly popular among South Korean homebodies, contributed US$1.5 billion of this total, ranking second in the world.

In the United States, more young people are also staying at home.

In 2018, a study published in the journal Joule found that people aged 18 to 24 spent 70 percent more time at home than the US population in general. Another survey that year, conducted by the marketing research company Mintel, showed that those in this age group preferred to drink at home, as they said going out required too much effort. Only 15 percent of baby boomers said they wanted to adopt such a lifestyle.

In China, the number of otaku surpassed 400 million last year, underscoring a steady growth trend, according to big data intelligence services provider QuestMobile. Those in the 25 to 34 age group accounted for more than 40 percent of homebodies.

Although “homebody culture” was initially popular in Europe and the United States, China has seen exponential growth in internet users, especially among Generation Z — those born between 1995 and 2009.

Opinions differ on the issue. In the book Shutting Out the Sun: How Japan Created its Own Lost Generation, by US journalist and author Michael Zielenziger, homebodies are described as dreamers and artists who choose to withdraw from a fast-paced life that left them exhausted.

According to professionals, including psychologists, developmental disorders such as Asperger’s syndrome or other antisocial personality conditions may contribute partly to the decision to stay at home.

Xu Yongjun, a professor of information management at Renmin University of China, said that in the past, the marginalization of homebodies not only reflected their weak position socially, but also their peripheral role in dominating ideology.

“Since mainstream culture cannot persuade otaku to take part in social activities, they resist such culture in their own ways,” Xu said.

But he added that the situation now is totally different. “The COVID-19 outbreak has produced a comprehensive change in people’s way of thinking and lifestyle, giving otaku culture a new meaning.

“The vast majority of people had no choice but to stay at home. The focus on being homebodies extends from traditional otaku elements such as animation, cosplay or entertainment idols to new ones such as culture and science, tourism and public spaces.”

During the outbreak, with travel off-limits to many people due to restrictions imposed around the world, the desire to stay at home has intensified in general. However, travel has remained a hot topic for discussion on social media platforms, alongside cooking and baking.

Xu said that as outdoor activities dwindled during the pandemic, the rising number of otaku resulted in the “stay-at-home economy” booming.

Online medical services and food deliveries, as well as livestreamed fitness and education classes, grew rapidly in the first quarter of this year.

Consumers have been encouraged to order goods via phone apps, and e-commerce platforms have helped farmers promote their products via livestreaming.

Xu said: “Crisis breeds opportunity. A new economic model is in the making. Enterprises are expected to transform themselves by introducing robots and online training. A new batch of large or super-large platforms may emerge in the near future.

“These trends will provide more life choices and possibilities for otaku. In the future, the functionality of homes will expand considerably, and more and more people may become homebodies.”