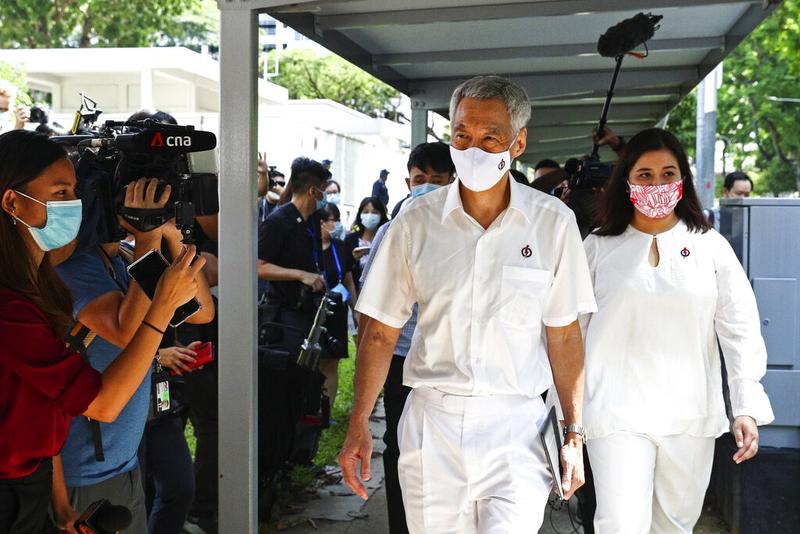 Singapore Prime Minister Lee Hsien Loong (center), also secretary-general of the People's Action Party, arrives at a nomination center with his team to submit their nomination papers ahead of the general election, in Singapore,  June 30, 2020. (YONG TECK LIM / AP)

Singapore's Prime Minister Lee Hsien Loong said he’s determined to hand over the city-state “intact” and in “good working order” to the next generation of leaders, predicting the coronavirus crisis will “weigh heavily” on the nation’s economy for at least a year.

Speaking Monday ahead of the general election on Friday, Lee said he’s determined to see the pandemic through and called on Singaporeans to give his People’s Action Party (PAP) a fresh mandate. This, he said, comes as the nation’s “biggest challenges lie ahead”.

All our experience since the beginning of this year has made clear just how important a good government is to fight COVID-19, support the economy and get out of this crisis intact. This is what this election is about.
Lee Hsien Loong, Singapore's prime minister

“We don’t know how the pandemic will end or whether a lasting solution will be found, be it a vaccine or more effective treatment,” Lee said in a virtual rally posted on the Facebook page of the ruling People’s Action Party. “We face a continuing danger to public health.”

The election takes place against the backdrop of a pandemic that has infected nearly 45,000 people in the city-state, most of them migrant workers living in tightly-packed dormitories. The government’s response to the virus has played a prominent role in the campaign.

The PAP, which has governed Singapore since independence in 1965, called for the election last month ahead of next year’s April deadline, and are widely expected to win. Lee said the goal now is to “turn around” the economy and attract new investments by maintaining business confidence, so companies “will not lose faith in us in a crisis”.

“All our experience since the beginning of this year has made clear just how important a good government is to fight COVID-19, support the economy and get out of this crisis intact,” he said. “This is what this election is about.”

Lee has signaled his intention to hand over power by 2022, when he will be 70 years old. His likely successor is Deputy Prime Minister and Finance Minister Heng Swee Keat, who leads the so-called “fourth generation” of PAP officials.

“I am determined to hand over Singapore, intact and in good working order, to the next team,” Lee said.