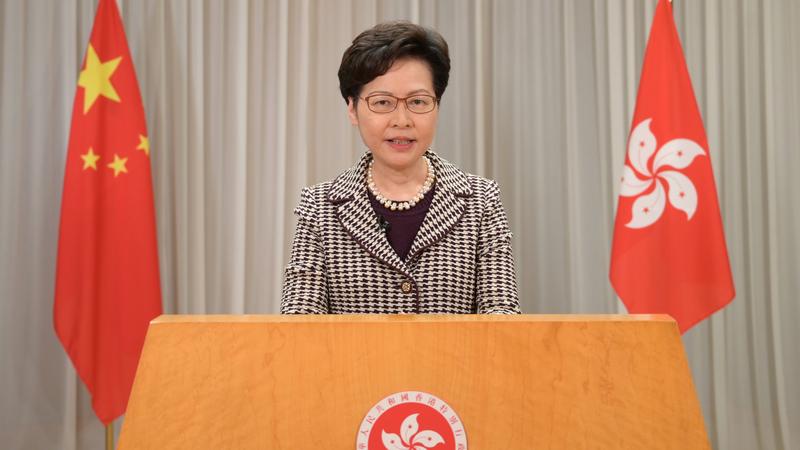 In a video message at the UN Human Rights Council meeting on Tuesday, Lam said with the implementation of the national security law in the special administrative region, the city will ride out the political storm it has been witnessing since June last year and emerge stronger with stability restored.

Following is the full text of the video message:

National security is invariably under the purview of the central authorities, be it in China or any other countries. In all countries, the power to legislate on national security rests solely with the central government. Hong Kong is an inalienable part of China – a special administrative region enjoying a high degree of autonomy which comes directly under the central government. As an exceptional arrangement under the policy of "one country, two systems", the Basic Law governing the two special administrative regions of Hong Kong and Macao obliges the SAR to enact local legislation on its own to safeguard national security. Macao has successfully completed this task in 2009. Hong Kong, after a failed attempt in 2003, has not been able to fulfil its constitutional duty. For the sake of not only the 7.5 million Hong Kong residents, but also the 1.4 billion people in the Chinese mainland, the question of how long we could tolerate such a gaping hole in national security has to be asked, and answered.

Legislation to safeguard national security is now urgently needed. Since last June, Hong Kong has been traumatized by escalating violence fanned by external forces. The threats of terrorist acts posed by illegal possession of explosives and firearms and the horrible menace faced by innocent Hong Kong people were recapped by my senior police colleague Oscar Kwok and a prominent businesswoman Pansy Ho respectively when they spoke at this forum in March this year and September last year. Once rated as one of the safest cities in the world, security and stability have become relevant concerns.

During this period, groups advocating "Hong Kong independence" and "self-determination" incited protesters, very often radicalized young people, to desecrate and burn the national flag, vandalize the national emblem and storm the central government's office in Hong Kong. Further, some local politicians proclaimed that they would paralyze the Hong Kong SAR government while others campaigned for foreign governments to interfere in Hong Kong's affairs or even to impose sanctions on Hong Kong. No central government could turn a blind eye to such threats to sovereignty and national security as well as risks of subversion of state power. All in all, these acts have crossed the "one country" red line and called for resolute action.

As the highest organ of state power in China, the National People's Congress has the constitutional power and the duty to enact national security legislation for the Hong Kong SAR. The national law to be enacted has taken into account Hong Kong's actual situation and will be applied in Hong Kong by way of promulgation in accordance with the Basic Law.

The legislation aims to prevent, curb and punish acts of secession, subversion of state power, terrorist activities, and collusion with foreign or external forces to endanger national security. These crimes will be clearly defined in the law. It will only target an extremely small minority of people who have breached the law, while the life and property, basic rights and freedoms of the overwhelming majority of Hong Kong residents will be protected.

The legislation upholds important legal principles such as presumption of innocence and protection of the rights of the suspect. It will have no retrospective effect. Except in rare specified situations, the Hong Kong SAR shall exercise jurisdiction over offences under the law. Investigation, prosecution and adjudication will be undertaken by the Hong Kong Police and the Department of Justice of the Hong Kong SAR Government and the independent judiciary including that of final adjudication. The law will not affect Hong Kong's renowned judicial independence. It will not affect legitimate rights and freedoms of individuals which are protected under the Basic Law and the relevant provisions of international covenants as applied to Hong Kong. They include, among others, the freedom of speech, of the press, of assembly, of demonstration, and of procession. In short, the legislation will not undermine "one country, two systems" and Hong Kong's high degree of autonomy.

Hong Kong is a free and diversified society. We respect differences in opinion and thrive on reaching consensus. But the "one country" principle is non-negotiable and could not be compromised as without "one country", "two systems" will stand on shaky ground and Hong Kong's stability and prosperity will be at risk. For those foreign governments or politicians raising objections to the legislation, one could only lament the "double standards" they are adopting. All those countries which have pointed their fingers at China have their own national security legislation in place. We could think of no valid reason why China alone should be inhibited from enacting national security legislation to protect every corner of its territory and all of its nationals.

Madam President, when I took office three years ago, I pledged to implement the "one country, two systems" policy, uphold the Basic Law, defend the rule of law, and promote a deep and positive relationship between the central government and the Hong Kong SAR. Despite the escalating tensions in society in recent years, I remain hopeful that, with full conviction in "one country, two systems" and upon implementation of the national security legislation, Hong Kong will ride out the political storm since last June and emerge stronger with stability restored. I and the Hong Kong SAR government are determined to capitalize on our strengths, harness the opportunities presented by our country's development and provide Hong Kong people with brighter prospects.

I urge the international community to respect our country's right to safeguard national security and Hong Kong people's aspirations for stability and harmony.
Thank you.