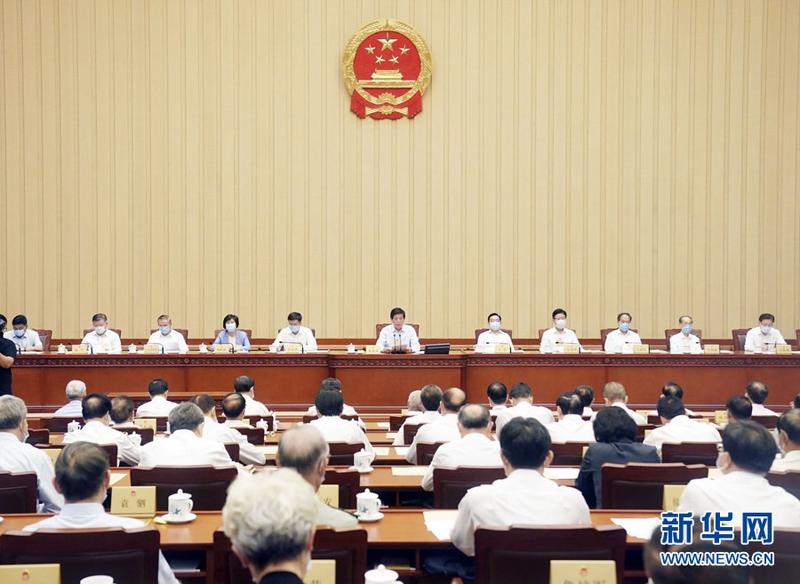 The law was passed at the 20th session of the Standing Committee of the 13th National People's Congress (NPC), China's top legislature.

President Xi Jinping signed a presidential order to promulgate the law, which goes into effect as of the date of promulgation.

The 163 members of the Standing Committee of the National People's Congress began the second deliberation of the bill during its 20th session in Beijing from Sunday to Tuesday and adopted the Law of the People's Republic of China on Safeguarding National Security in the Hong Kong Special Administrative Region.

Those at the meeting, which closed on Tuesday afternoon, also decided to add the law into Annex III of the HKSAR Basic Law.

The law, formulated based on an NPC decision on establishing and improving the legal system and enforcement mechanisms for the HKSAR to safeguard national security, has 66 articles in six chapters, and is a comprehensive law with substantive law, procedural law and organic law contents.

It thus establishes the legal system and enforcement mechanisms for the HKSAR to safeguard national security.

The newly-adopted decision stipulates that the law shall be applied in the HKSAR by way of promulgation by the region.

Li Zhanshu, chairman of the NPC Standing Committee, presided over the closing meeting and said the law being unanimously passed reflected the common will of the Chinese people, including Hong Kong compatriots

Li Zhanshu, chairman of the NPC Standing Committee, presided over the closing meeting and said the law being unanimously passed reflected the common will of the Chinese people, including Hong Kong compatriots.

He noted that national security, social stability and the order of the rule of law are the prerequisites for the development of Hong Kong and this legislation has followed the people's wish.

The law fully considers the differences between the two systems, as well as the specific situation in Hong Kong. It is in line with national laws that safeguard national security and is compatible with Hong Kong's legal system. It sticks to the principle that it will only target very few criminals but protect the majority of Hong Kong people, Li said, adding it provides legal support to safeguard national security and Hong Kong's long-term stability and prosperity, and protect foreign investors' interests in Hong Kong, as well as the rights and freedoms enjoyed by Hong Kong residents. It also guarantees a smooth and steady course of the "one country, two systems" cause.

He said the implementation of the law will strongly maintain Hong Kong's constitutional order and the rule of law, prevent foreign interference and protect Hong Kong's fundamental interests.

Zhang Yangfei contributed to this report