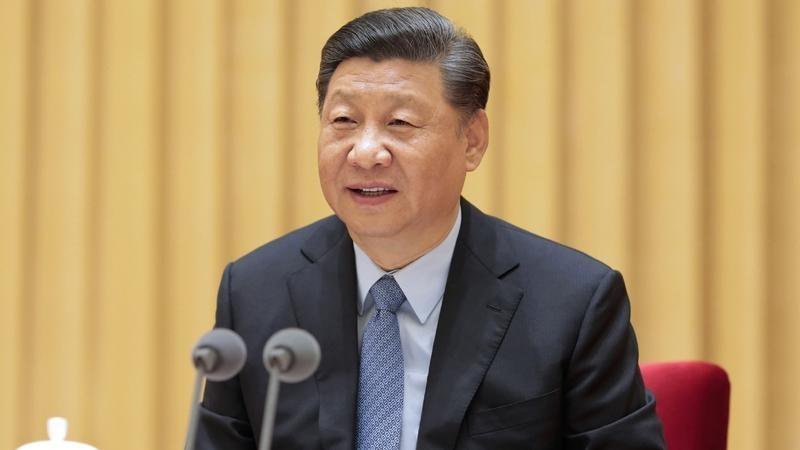 President Xi Jinping speaks at a national conference on public security held on May 7 and 8 in Beijing. (PHOTO / XINHUA)

BEIJING — Xi Jinping, general secretary of the Communist Party of China (CPC) Central Committee, has emphasized better implementation of the CPC's organizational line in the new era to make the Party still stronger.

Xi made the remarks Monday while presiding over a group study session of the Political Bureau of the CPC Central Committee on studying and implementing the Party's organizational line in the new era.

Organizational building is an important foundation for Party building, Xi said, stressing efforts to make the CPC still stronger for it to lead the Chinese people of all ethnic groups toward national rejuvenation along the path of socialism with Chinese characteristics in its long-term governance.

We should unswervingly uphold and improve Party leadership and continue advancing the great new project of Party building.

"We should unswervingly uphold and improve Party leadership and continue advancing the great new project of Party building," Xi said.

Noting that Wednesday marks the 99th founding anniversary of the CPC, Xi extended greetings to Party members across the country on behalf of the CPC Central Committee.

While properly understanding the connotations and requirements of the Party's organizational line in the new era, efforts should be made to better implement it with focuses on achieving goals, solving problems and making good results, said Xi.

Party organizations at all levels and all Party members and officials, especially leading officials, should translate the CPC's new theories into practice, Xi said, asking Party committees and their organization departments to use Party theories to guide organizational building, with further reform and innovation.

Xi also highlighted the construction of the Party's organizational system, urging Party organizations to enhance their ability to lead politically, guide through theory, organize the people and inspire society.

In selecting officials and deploying talent, both virtues and competence are important criteria, Xi said, stressing the need to improve officials' capacity for governance.

He called for further education and training of Party officials and deeper reform of the system and mechanism for talent development.

Meanwhile, in a reply to a letter from 30 Party members volunteering at a museum of The Communist Manifesto at the Shanghai-based Fudan University, Xi encouraged CPC members to build firm ideals and convictions and strive to fulfill the Party's original aspiration and mission.

The museum was adapted from the former residence of Chen Wangdao, translator of the first full Chinese edition of The Communist Manifesto and first president of Fudan University after the founding of New China.

In the reply, Xi said Chen's translation a century ago had played an important role in guiding a large number of aspirational Chinese to establish the great ideal of communism and devote themselves to the cause of national liberation and rejuvenation.

Xi spoke of the great importance of the volunteers' active efforts to share Chen's story of pursuing truth and disseminate Marxist theory, urging them to keep up the work and do it even better.

"Only with a firm belief can one go far," Xi said, adding that it is all the more necessary for CPC members to unswervingly uphold ideals and convictions, and strive ceaselessly.

He called on all CPC members, especially young members, to conscientiously study Marxist theory and the histories of the Party, New China, the reform and opening up, and the development of socialism, so as to cultivate firm ideals and convictions and fulfill the Party's original aspiration and founding mission.