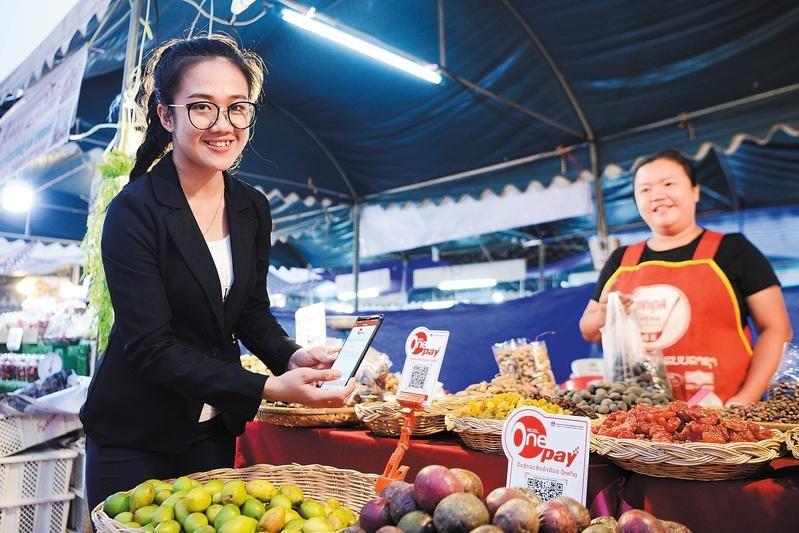 A customer uses digital payment at a food stand in Vientiane, capital of Laos. (PHOTO / XINHUA)

WASHINGTON - An International Monetary Fund (IMF) official has said that China's Fintech sector was quite "instrumental" in helping small and medium-sized enterprises (SMEs) obtain credit, noting that it's a crucial element in getting through the COVID-19 lockdown.

"The payments that are conducted and facilitated through tech firms are very large in China," Tobias Adrian, financial counselor and director of the IMF's Monetary and Capital Markets Department, told Xinhua in a recent video interview.

Despite banks as dominating creditors, plus a large corporate bond market, Adrian said that Fintech element is important for households and for SMEs, which account for a substantial fraction of gross domestic product in China.

Noting that there's a tremendous amount of innovation in financial services across the globe, the IMF official said on some dimensions, "China has really led the way" on many financial technology developments.

Adrian added that he would expect Fintech developments to spread more rapidly around the world in response to the virus, because contactless payments and online credit are much more important in the current situation.

Noting that central banks have contributed to the easing of financial conditions, the IMF official said at this point he doesn't believe there is clear evidence of bubbles, generated by irrational pricing

In an update to its April Global Financial Stability Report, the IMF warned on Thursday that the ongoing disconnect between financial markets and the real economy is a "vulnerability," which could pose a threat to the recovery should investor risk appetite fade.

"So what we are referring to is a tug of war between financial conditions and economic conditions," Adrian said.

"Asset prices in some countries and some sectors have returned to pre-COVID levels ... yet the forecast for earnings going forward is lower, and the uncertainty around the future path is higher," he told Xinhua.

As governments adopt "unconventional" monetary policy amid the COVID-19 pandemic, interest rates have been lower, and the pricing of the risk has compressed, which have pushed up asset prices, he said.

Noting that central banks have contributed to the easing of financial conditions, the IMF official said at this point he doesn't believe there is clear evidence of bubbles, generated by irrational pricing.

A number of developments could, however, trigger a decline in risk assets' prices, including a deeper and longer-than-anticipated recession, a second wave of infections with ensuing containment measures, as well as geopolitical tensions or broadening social unrest in response to rising global inequality, said the updated report.

Expectations about the extent of central banks' support could turn out to be "too optimistic," also leading investors to reassess their appetite and pricing of risk, the report added.

"I do believe that central banks should continue to conduct this easy stance, accommodative stance of monetary policy because it helps the real economy," Adrian said. "At the same time, prudential authorities have to make sure that prudential buffers in banks, but also in households and corporations are sufficient."

The IMF official noted that banks have much higher capital and liquidity going into this crisis as a result of decade-long reforms, and the amount of capital is going to be sufficient "in most countries for most banks."

"But of course, some countries are going to be hit especially hard, and some of the weaker banks might need to be resolved," he said, "furthermore, in some countries, there could even be system-wide distress."

The updated report also highlighted the issue of high levels of debt, saying that corporate and household debt burdens "could become unmanageable" for some borrowers in severe economic contraction.

"The high debt level is a vulnerability," Adrian said, "but interest rates are likely to be lower as well going forward, so the debt service burden might not increase."

"So the question is always is the level of debt sustainable? And is it sustainable in various scenarios going forward, so if stress is recurring, if economic activity slows down further? And the answer is varied across countries," the IMF official said.

"Riskier borrowers, where debt sustainability might be (in) question, do face high borrowing costs, and some of them might be shut out of markets," he said.

Adrian said that about 70 countries have received emergency financing from the IMF amid the pandemic, and the multilateral lender has been working closely with other organizations including the World Bank to help countries address the crisis.