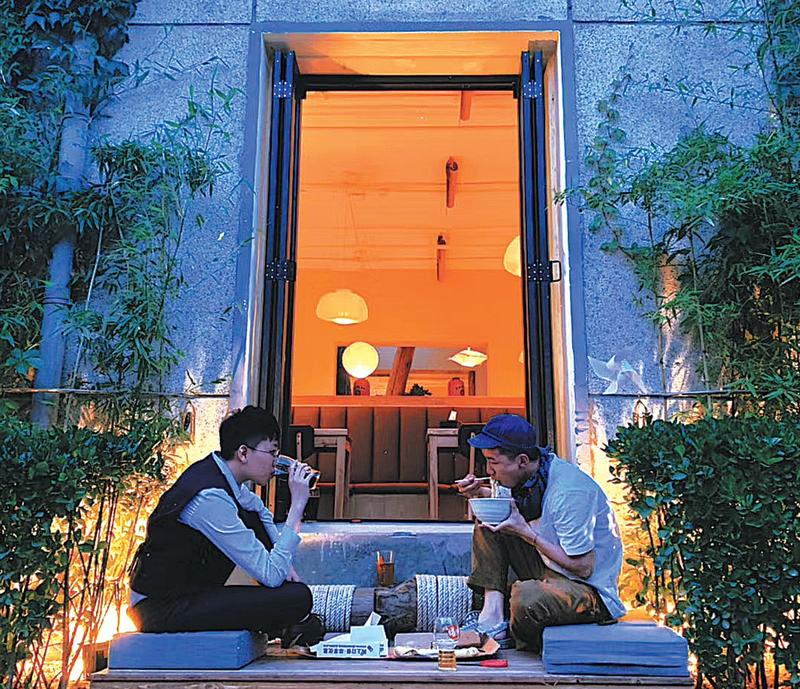 Chef Yu Lei and his wife took a 14-day course to learn how to make reganmian, or hot dry noodles.

After passing a strict exam on creating the dish－a favorite in Wuhan, capital of Hubei province－the couple opened a restaurant in Yunmeng county, a two-hour drive from the city.

Each morning, they arrive at 5 am and prepare to serve the noodles before 6 am. Income from the breakfast dish comprises 70 percent of their daily revenue.

We are trying to emerge from this year stronger than when we started, and so far we seem to be going in the right direction

The 50-square-meter restaurant is the latest branch of the Cai Hanwen Reganmian chain founded by 28-year-old Cai Dasen in 2016. Cai's great-grandfather claimed to have created Wuhan reganmian.

Cai Dasen has used the name of his grandfather, Cai Hanwen, to open about two dozen reganmian restaurants in Wuhan and 10 elsewhere in Hubei.

Business at the outlets in Wuhan is slowly recovering, while some remain closed as migrant workers－one of the main customer groups－have not yet returned to the city in the same numbers as before the COVID-19 pandemic, Cai Dasen said.

"Our business in cities around Wuhan is returning to normal more quickly," he said.

At Yu's new branch, business is looking good, perhaps because of the promotional work carried out for the opening, and the couple is considering opening another branch later this year.

From left: Haoyingxiong, a fresh-oyster buffet chain based in Chengdu, capital of Sichuan province, opens its first two branches in Beijing in June, 2020. A range of dishes from the province is offered at Superfly, which was opened by Michelin-starred chef Li Dong in Beijing's Sanlitun area in January. (PHOTO PROVIDED TO CHINA DAILY)

The catering sector is gradually recovering from disruption caused by the pandemic. According to the National Bureau of Statistics, the industry's income last month reached 301.3 billion yuan (about US$42.6 billion), a 70.7 billion yuan rise from April, but still down by nearly 19 percent year-on-year.

Some restaurants have failed to survive the pandemic, but new ones have opened in their place, bringing variety and vitality to the industry.

From Chinese to Western cuisine, and from chains to Michelin-starred eateries, the new businesses demonstrate restaurateurs' ambition and confidence.

Cai Dasen said his main aim is to open more branches in cities around Wuhan this year.

"Competition among reganmian restaurants is intense－there are hundreds of them selling the noodles in Wuhan. At the same time, rental and labor costs are much higher in Wuhan than in neighboring cities," he said.

Cai Dasen is confident about the catering industry in Wuhan, as he considers eating out a daily necessity. He plans to open a 900-square-meter restaurant in the city this year to serve dishes other than reganmian.

Many new restaurants were planning to open after Spring Festival, but the sudden emergence of the pandemic delayed construction and recruitment of staff members. 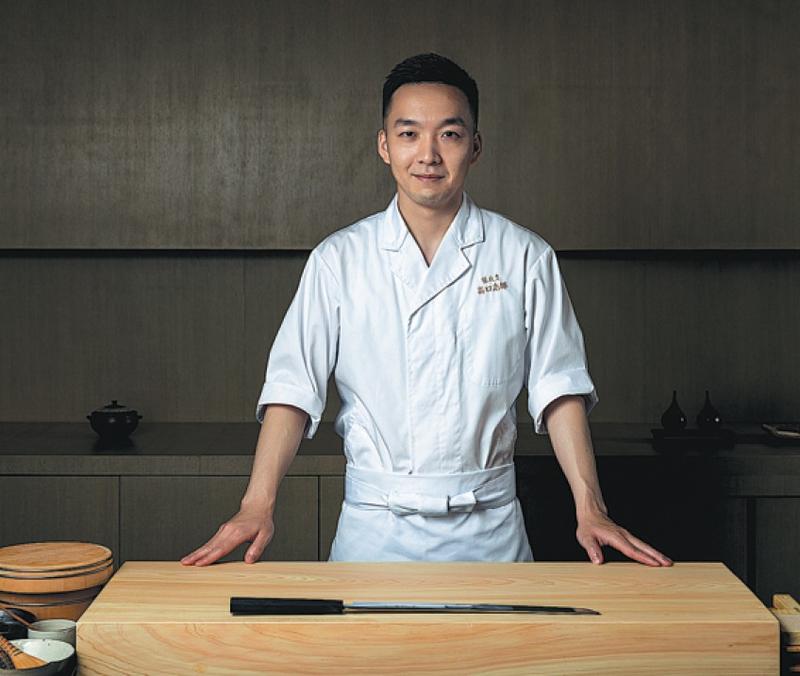 On May 30, the Crayfish King chain opened its Huanqiu Guoji branch in Wuhan. The brand, founded in Qianjiang, Hubei, a city known for its crayfish, in 2008, now has some 70 branches nationwide.

Yang Zhijun, 30, owner of the new branch, said it originally planned to open in March, but the lockdown in the city meant that construction work was halted and could not be restarted until April.

"The work was half-completed before Spring Festival. However, in April, there were still not that many workers in town, so preparations for the opening were not completed until the end of May," Yang said.

The best time to sell crayfish is from April to June, so there was only one month left when the outlet opened, and business has not been as good as expected, Yang added.

For the Shoku-tei Sushi restaurant in Shenzhen, Guangdong province, which opened on June 3, delayed construction was not the only difficulty.

The work started in October, and some artworks were commissioned from Spain for the restaurant, but the pandemic delayed their arrival.

Ma Yingda, the owner of Shoku-tei Sushi, said the business was planned in 2018, and in the past two years, high-end Japanese restaurants have become increasingly popular in Shenzhen, with new outlets continuing to open. 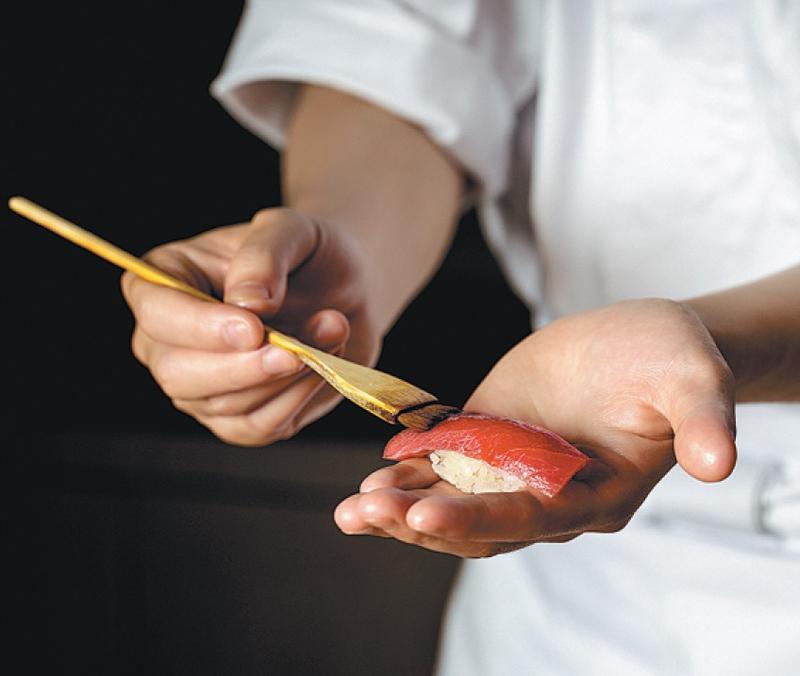 Koguchi Shiro, one of Shoku-tei Sushi's two head chefs, moved to Shenzhen with his family in January, while the other, Ishida Kazuhiro, planned to arrive at the end of February, but a prolonged journey meant he was unable to start work until late March.

"Chef Kazuhiro could only fly to Shanghai initially, and after being tested for COVID-19 several times, was isolated in a hotel for two weeks before being able to join preparations for opening the business," Ma said.

However, the longer preparation time enabled the restaurant to produce a high standard of service and food, as both the chefs and the service team were able to rehearse for two months, Ma said.

"Customers say the food we serve is of the same standard as that in Tokyo. Due to the pandemic, local customers can't visit Hong Kong or Tokyo, so they are coming to our restaurant more often."

The sushi business has been affected to a certain extent by the outbreak of COVID-19 in Beijing this month at the Xinfadi wholesale farm-produce market, where the virus was detected on cutting boards used for salmon.

However, Ma thinks the situation will soon improve. "The main feature of the catering business is that it's not something that happens over a certain period－it has existed for a long time," he said.

He added that the pandemic will act as a filter. Among businesses of the same type, only the good ones will survive, as customers will be more discerning.

"The pandemic has also made restaurateurs more conservative about scale and pricing when they plan to open new businesses," he said. 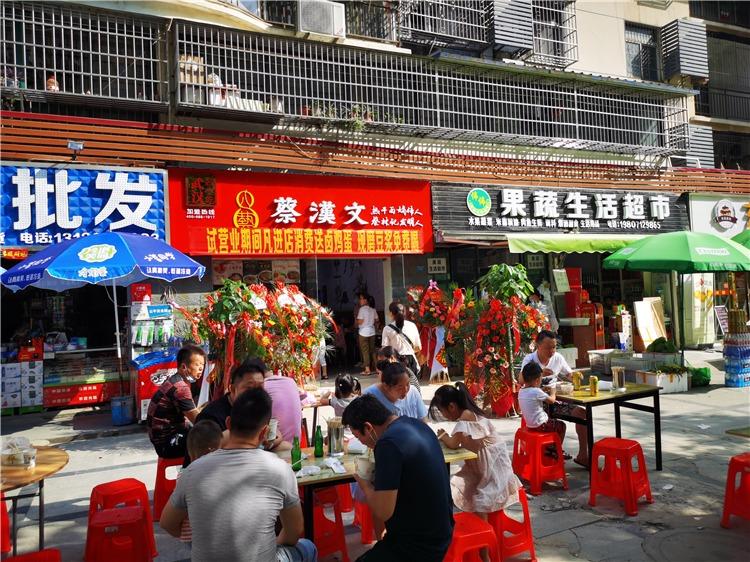 In 2018, Michelin-starred chef Li Dong started planning his new restaurant, Superfly. It took him and his team a year to finalize the concept for the business－an informal Japanese-style izakaya outlet specializing in cuisine from Sichuan province.

Located in the Sanlitun area of Beijing, Li hopes that Superfly can become popular among young customers.

The business had a soft opening in January, before closing for four months. Li and his team carried out several food tastings to perfect every dish before the official opening in June.

"In addition to testing our dishes, all the staff have been busy during the past two months helping other restaurants with takeout services," Li said.

Superfly manager Wang Shuzhen said business during weekends is better than on weekdays and customers like the pairing of cocktails and Sichuan cuisine.

"Clients who visit us frequently have all said they will return and bring friends," Wang said.

In Shanghai, Carrefour China, which was acquired by e-commerce giant Suning last year, opened its first restaurant on June 16.

The 600-square-meter space, located in a Carrefour supermarket in the Gubei area, seats 200 diners. All the food is made from the supermarket's own products, and the average cost of a meal is a few dozen yuan.

According to Beijing Business Today, Carrefour will open a branch in Chongqing and more than 100 outlets nationwide this year.

Haoyingxiong, the fresh-oyster buffet chain based in Chengdu, capital of Sichuan, opened its first two branches in Beijing this month, with long lines forming at both.

Wang Jingli, 34, owner of the outlets, said, "The oyster buffet is new to Beijing diners, and the oysters can be barbequed or steamed."

Shipped from Rushan, Shandong province, each day, the oysters are served within four hours of arrival.

"About 80 percent of our clients are males, compared with 80 percent of females at my other restaurants, which focus on Sichuan hotpot," Wang said.

Both Beijing locations used to be occupied by other restaurants. Construction of the branches started in April and Wang sent his team to study culinary skills in Chengdu, followed by a two-week quarantine period on returning to Beijing.

Business at the new eateries is better than at his other restaurants in the capital, which are slowly recovering from the pandemic. Wang is preparing to open four other Haoyingxiong branches in Beijing.

"The new concept is popular and will soon be copied by rivals. I aim to occupy the market as long as I can before competitors show up," he said.

A new concept of the izakaya-style bar emerged after restaurateur Liu Gang teamed up with the owner of a craft beer brewery during the pandemic.

"I found a location where a restaurant serving Japanese cuisine had just closed. I kept the original structure, with some additions," Liu said, adding that he believes a good business deserves to survive.

His other restaurant, Ootoku-Sakaba, an izakaya in Chaoyang that opened in 2011, stopped operating on June 22 after the new outbreak in the city.

Liu said he will open a restaurant in Sanlitun next month, adding, "There are both risks and opportunities due to the pandemic."

For Ignace Lecleir, owner of the TRB Hospitality group, the pandemic has brought challenge and opportunity.

One of his fine-dining restaurants, TRB Hutong, remains closed in Beijing, but he has launched a takeout service at his Hulu eatery in Sanlitun.

Business fell by 90 percent in February, prompting him to launch the new service, for which he used his chefs and wait staff members.

"We all basically rolled up our sleeves, like a family trying to find ways to get through this difficult period together," he said.

Lecleir's team delivers within a 5-kilometer radius of the business.

Noticing that people in the capital's Shunyi district did not have many options for food, he decided to run a kitchen there and start a delivery service.

"When I saw market interest in my products, I decided to open the business. I acted very quickly," he said.

The owner of the restaurant Lecleir rents the kitchen from decided to transfer the business, and the latter took over immediately. From design to construction to remodeling the interior, it took just two weeks to open Hulu Shunyi.

"Only in China, can you act so fast," Lecleir said.

However, the pandemic has made him stop and reflect. He thinks the key to running his business is to keep refining it, as many people will change their behavior after the pandemic, and it's also easier for them to stay home and eat. As a result, they have higher expectations when dining at restaurants.

Lecleir has confidence in the catering industry in China.

"I feel very fortunate to be in China－if I was in a different country, I would be slightly more concerned. However, here you can see that the rebound (from the pandemic) has been very positive," he said.

Business at the Hulu Sanlitun branch recovered last month, and was better than at the same time last year.

Lecleir is preparing to open a branch in the Wangjing area of Beijing in mid-August.

"We are trying to emerge from this year stronger than when we started, and so far we seem to be going in the right direction," he said.