By Pan Mengqi and Zhang Zhihao 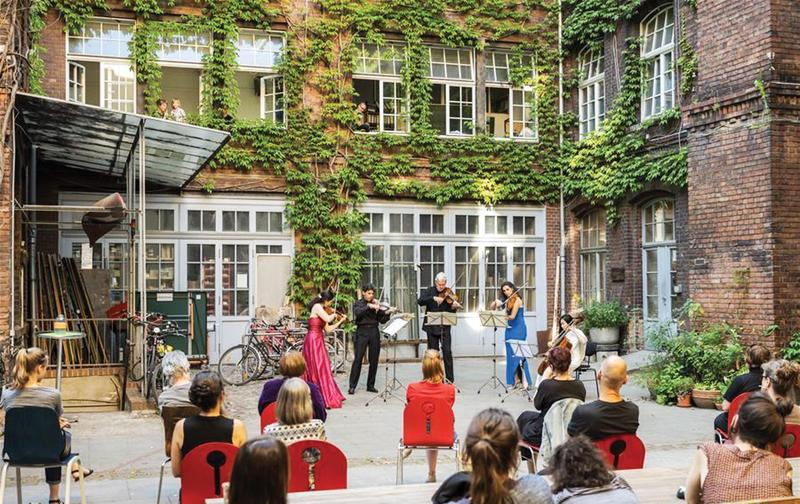 People watch a backyard concert performed by members of the Staatskapelle Berlin orchestra in Berlin, capital of Germany, on June 23. (PETER ADAMIK / XINHUA)

With the United Nations marking the 75th anniversary of the signing of its charter on June 26, experts at an online forum have called for all countries to enhance multilateralism amid the COVID-19 global health crisis, which has greatly disrupted countries around the world and exposed them to severe economic and social repercussions.

The COVID-19 outbreak is a stark reminder of the need for global cooperation across borders, an international forum of leading analysts heard on June 24. Countries’ responses will determine how fast the world recovers and how well it handles pressing challenges, they said.

The online event, co-organized by think tanks from China, Germany, Russia and the United Kingdom, was held to mark the 75th anniversary of the signing of the UN Charter.

“The international community should have become much closer, but unfortunately, the rise of unilateralism has deepened division across the world in past years,” said former French prime minister Jean-Pierre Raffarin, who gave the keynote speech at the forum.

Raffarin said a rising trend of unilateralism, isolationism and protectionism has been reinforced during the COVID-19 outbreak, threatening the effectiveness of the global fight against the pandemic. He emphasized that the United Nations still stands as the largest international multilateral arena today.

“The world economy is interconnected. China’s growth will help Asia and even Europe’s growth, and the development of North America and Europe will also benefit the growth of emerging markets and developing countries,” he said.

Nicholas Rosellini, the resident coordinator of UN China, said the novel coronavirus pandemic is the biggest challenge facing humanity since World War II. To fight it, he said, the world must reaffirm the principles of the UN Charter, strengthen trust and cooperation and guide the world toward fulfilling the goals of achieving sustainable development.

The United States saw a steep rise in confirmed cases in a number of states, including California and Texas.

California reported 7,149 new cases of COVID-19 over a 24-hour span on June 24, shattering the daily record for new infections for a second straight day.

“Not only as we reopen our economy but we begin to reopen our households and we begin to go back to our old ways and our old habits, the consequence is we are spreading this virus,” said California Governor Gavin Newsom at a daily news briefing.

In Germany, new infections remained above the previous weeks’ average and increased by 587 within one day to 191,449, the Robert Koch Institute announced on June 24.

Local COVID-19 outbreaks — such as at Germany’s largest meat processing company Toennies in the district of Guetersloh — were causing nationwide figures to rise. More than 1,500 employees of Toennies had been infected with COVID-19, according to city officials. The number of new infections per 100,000 inhabitants in the district within the past seven days had risen to more than 270.

Good news again came from China, where it seemed the situation in Beijing had stabilized. The country reached an important new level of vaccine development with the start of the phase three clinical trial of an inactivated vaccine candidate against COVID-19 in the United Arab Emirates on June 23.

It is the first vaccine of its kind to reach a late-stage, mass-scale human trial, according to China National Biotec Group.

Xinhua contributed to the report.