Looking for a perspective on China’s  trade relationship with the West? Charles Seymour recommends visiting the hong paintings from Canton (now Guangzhou) in the recently-reopened Hong Kong Museum of Art.

A Panoramic View of the Waterfront at Canton, (1844—45), attributed to Youqua, depicts maritime traffic in Guangzhou in the aftermath of the First Opium War. (PHOTO PROVIDED TO CHINA DAILY)

Hong Kong Museum of Art (HKMoA) reopened on May 6. The museum, which had to close its doors soon after its re-launch in November 2019, in keeping with the local government’s social distancing regulations, is welcoming public visits again.

With nine fascinating exhibitions, including the headline-grabbing Wu Guanzhong donations, running at the same time, it might be easy to miss some of the relatively low-profile shows. One such is Lost and Found: Guardians of the Chater Collection.

A priceless exhibit in this show, titled Foreign Factories in Guangzhou (1817—19), painted by an anonymous artist epitomizes the history of Guangzhou (then Canton) as a hub of bustling international trade in the 18th and 19th centuries — the only place in the entire Qing Empire where foreign trade was conducted between 1757 and 1842. It represents a popular genre of paintings that visiting foreign merchants would collect as souvenirs. 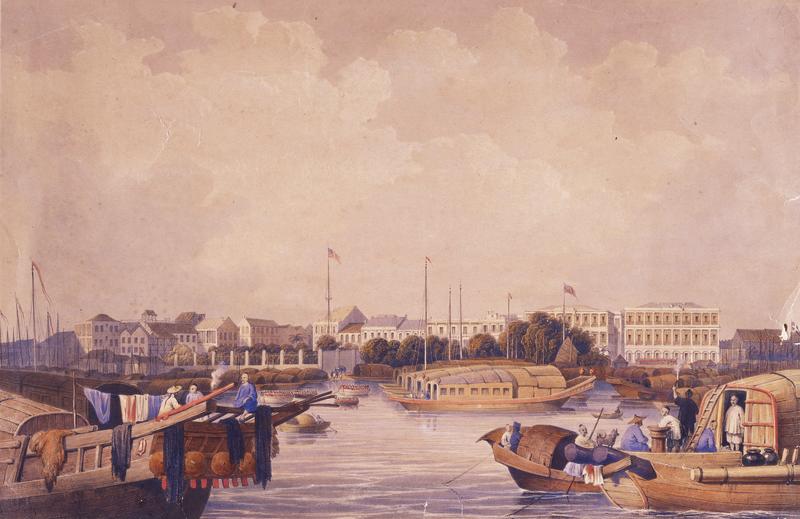 Foreign merchants visiting Chinese shores would pick up hong paintings, like this 1820 piece from the Hong Kong Museum of Art collection, as souvenirs. (PHOTO PROVIDED TO CHINA DAILY)

Typically, the focus of such paintings is on a row of buildings. These were called hongs, the Cantonese word for factories, although they were not used as manufacturing units. Hongs, with their western-looking facades, and flags flying aloft, formed a foreign enclave along the riverbank where traders from different countries lived and worked. They were at the center of foreign trade in the Qing Dynasty; and served as an interface between the Qing Empire and the West.

HKMoA Director Maria Mok explains, “Foreign traders were not allowed to trade freely. They rented hongs as bases from merchants nominated by the Qing government to act as agents for foreign traders. It was through these agents that business was conducted.” In spite of foreign traders having to negotiate a complicated system, business flourished and both sides made huge fortunes.

“As an incredibly wealthy power, the Qing Empire was self-sufficient. Europeans came knocking on the Empire’s door for business as they were in need of a market for the copious amounts of products they had mass produced, having recently gone through the Industrial Revolution (1840-60),” says Mok. 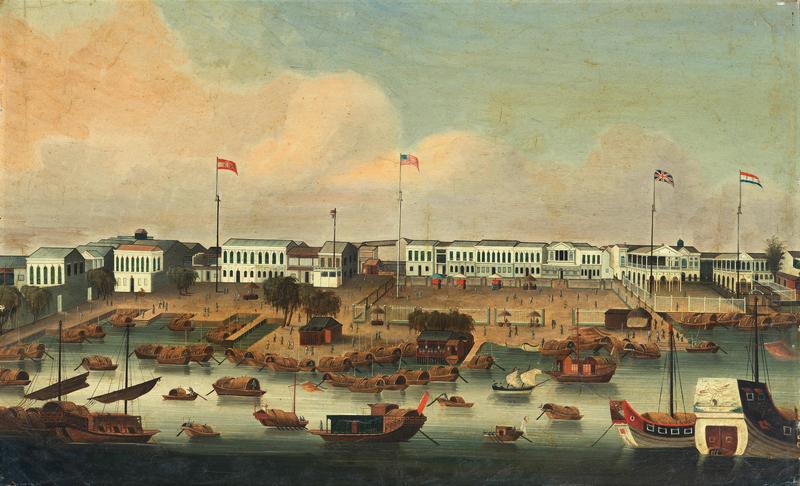 Mok mentions that the merchants and travellers who bought these works would usually have them displayed at home, not only as elaborate mementos of their lucrative and often hazardous voyages to the great Cathay, but also as conversation pieces to show family and friends what life was like in the distant shores of China.

Due to the high demand of such works, there were dedicated studios with numerous Chinese artists working tirelessly to cater to this profitable market. “I can’t even provide a wild guess as to how many of such paintings were created, but they number in the hundreds,” Mok remarks.

These creations ended up in different private and public collections around the world. According to Mok, while Peabody Essex Museum in the United States has the largest collection of best quality pieces, and the Victoria and Albert Museum in London has a few, HKMoA has the finest haul of hong paintings in Asia.

Mok adds that hong paintings are not mere copies of each other, based on a template, rather, reliable historical records. “The accuracy of detail seems to have been of the highest priority, with the artists recording every feature strenuously.”

Foreign traders who rented the hongs preferred to have the renovations they made to be faithfully reflected in the paintings. “These works are truly ‘history written by art’,” says Mok. 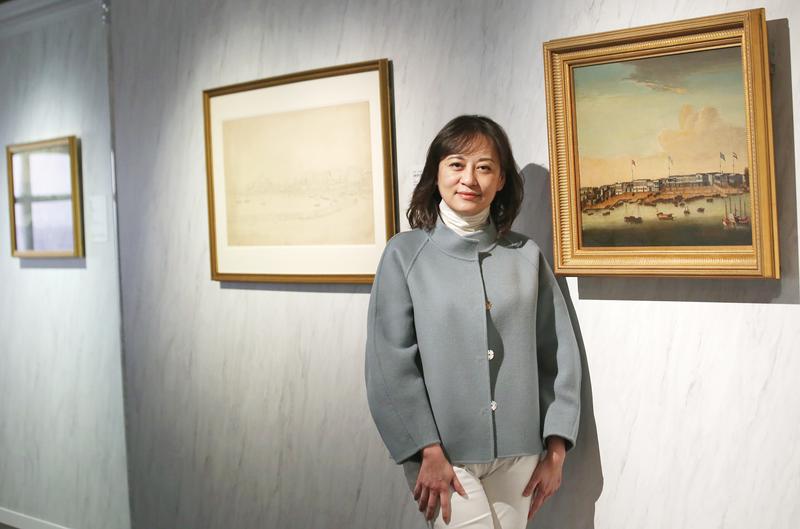 A typical hong painting features the sky, hongs and the Pearl River, arranged in horizontal layers running parallel to each other.

These works are a hybrid of Chinese and Western painting styles, says Mok. While the chosen media — oil, watercolor, or gouache — are typically Western, the depiction of the hongs betray Chinese artistic influences. Mok says, “Local artists abandoned the Western aerial perspective in favor of Chinese multiple perspectives. It deprived the works of three-dimensionality, but allowed room for the finesse of details and brilliance of colors to shine through, and it was something the Western patrons craved.”

Mok believes Chinese artists made a conscious decision to combine Chinese and Western styles. “If they chose to paint in a purely Chinese style, it wouldn’t appeal to Western customers. If they painted in a purely Western style, they’d lose their niche.”

Less than 20 years after Foreign Factories in Guangzhou was painted, the First Opium War (1840-42), which was the result of trade disputes between the Chinese and British, took place. The conflict of interests between the East and West continues in the present time and   HKMoA’s collection of hong paintings takes us back to where modern Chinese history began. 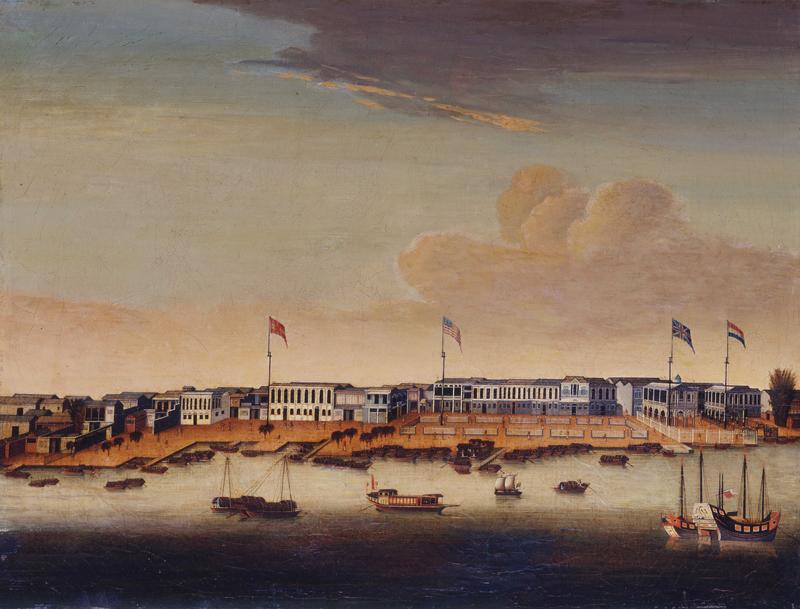 Foreign Factories in Guangzhou (1817 — 19) by an anonymous artist epitomizes the history of Guangzhou as a hub of bustling international trade in the 18th and 19th centuries. (PHOTO PROVIDED TO CHINA DAILY)

Sino-British trade down the years

Chinese maritime commerce could be traced as far back as Han (206 BC to 220 AD) and Tang (618 AD to 907 AD) dynasties, the Silk Road being the primary example. Hong paintings were a direct by-product of foreign trade during the Qing Empire (1644 to 1911), the last imperial dynasty in Chinese history.

In the 18th and 19th centuries, the European aristocracy obsessively collected Chinese luxury goods such as porcelain, silk, and tea, which justified making frequent, long, and arduous journeys halfway across the world.  In 1722 alone, the East India Company from Britain imported over 400,000 items of cups, saucers and other utilitarian porcelain ware.

Since the Chinese were not so keen to acquire European products in the 18th century, the European nations sustained trade deficits while the Qing Empire prospered. To counter this imbalance, the British East India Company smuggled Indian opium into China through the port in Canton. As many Chinese people got hooked to the narcotic, despite imperial decrees banning import of opium, the trade imbalance was reversed.

The worried Qing Emperor Daoguang sent viceroy Lin Zexu to seize and destroy all opium in Canton. After a series of conflicts, in 1840, the British government launched an offensive against the Qing Empire which snowballed into the First Opium War.

The war ended in August 1842 with the signing of the Treaty of Nanking. In addition to reparations and opening of other ports for trade, Hong Kong Island was ceded to Britain.

Lost and Found: Guardians of the Chater Collection; Ordinary to Extraordinary: Stories of the Museum HIKE YOUR HIKE | Lion beneath the moon