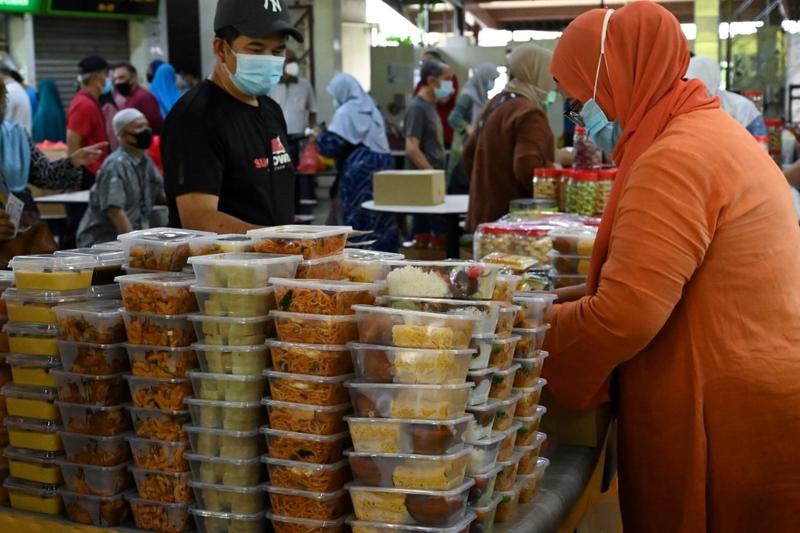 People wearing face masks amid concern over the spread of the COVID-19 coronavirus buy food for their fasting break at Geylang Serai market hawkers centre in Singapore on May 21, 2020. (ROSLAN RAHMAN / AFP)

Singaporeans’ appetite for meals delivered to their doors appears to have been turbo-charged by being stuck indoors during the coronavirus outbreak. This has cast a light on the country’s struggles to regulate the plastic these meals are carried in.

As people stayed home during the April 7 to June 1 so-called circuit breaker period, indications are that the consumption of meals packaged with plastic jumped

As people stayed home during the April 7 to June 1 so-called circuit breaker period, indications are that the consumption of meals packaged with plastic jumped. The volume of overall rubbish produced also increased.

Takeaway food rose by almost a fifth per week when lockdown measures were in place and there was a 73 percent surge in delivered meals, according to estimates from an online survey conducted by National University of Singapore alumni on 1,110 respondents. This resulted in an additional 1,334 tons of disposable forks, spoons and containers, equivalent to the weight of 92 double-decker buses, according to the survey.

Meanwhile, daily waste collected from domestic and trade premises like apartments and shophouses was 3 percent higher over the eight-week circuit breaker period compared with March, the National Environment Agency said in response to emailed queries.

“There is a need to do more to reduce the excessive consumption of disposables,” the agency said. Last year, about 200,000 tons of domestic waste thrown away were disposables, comprising items like carrier bags and takeaway containers, enough to fill up about 400 Olympic-size swimming pools, it said.

Some 83 countries had banned retailers from providing free plastic bags to customers as of mid-2018, according to a United Nations Development Programme report, while around two-thirds of the 192 nations surveyed had adopted some form of legislation to regulate them.

While Singapore has yet to regulate plastic bag use, it is taking steps in that direction. It also works with residents, schools and businesses to encourage and support practices like bringing one’s own food containers, recycling and not providing disposable cutlery by default.

Among other plans, the government will require businesses and retailers such as supermarkets with an annual turnover of more than S$10 million (US$7.2 million) to report what types of packaging they are using and submit plans to reduce volumes or recycle them by March 2022. The deadline was pushed back from an earlier timeline of 2021 due to the Covid-19 disruptions.

In the meantime, the government will bring together citizens from September through March 2021 to look at more ways to cut the excessive use of disposable waste.